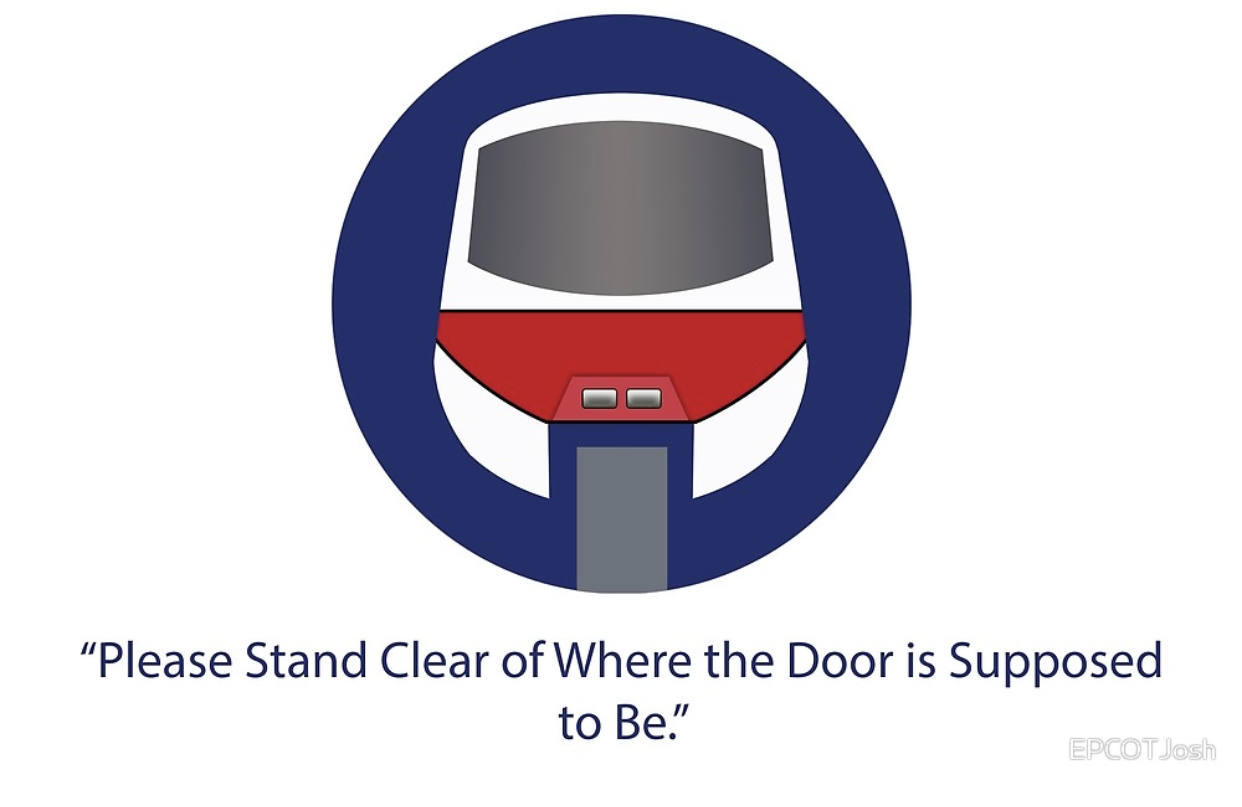 This week’s SATURDAY SIX is a special one as we once again dust off the blue blazer and step behind the SATURDAY SIX News Desk. It has been a whirlwind of theme park related news lately. Our long national nightmare is over as “millennial pink” MagicBands are finally available, a Disney guest yelled “Lock Him Up!” at a Donald Trump audio-animatronic (to be fair the person who filmed everything in portrait committed the biggest offense of all,) and somehow Disneyland guests now have crazier donuts than us in Orlando. Be fair to Florida!

So – as usual – we took a page out of our old college playbook, chugged down a case of 5 Hour Energy, and pulled an all-nighter. That’s right, we crammed as much information as we could into our tiny brains so that we could report back to you, Dear Reader, with all the relevant facts (and before we forget it all tomorrow). So sit back, know that you are getting all the news that’s fit to print (and plenty more that’s not), and let’s begin our countdown starting with…

You would have had to be living under a rock to miss this story, as news went viral with a video of a monorail running while a door was open. As we covered in a recent SATURDAY SIX, it has been a rough year for the Disney monorails. Actually more like a rough five years, if not a full decade. It’s one thing for the cabs to look dirty, or even for parts to fall off, but a monorail running with a door open seems like a whole bunch of safety features would have had to fail all at once. Walt Disney World has a wide assortment of vehicles available for guests to get to and from resorts, including the new Minnie Van service along with the upcoming gondolas, but it is clear some major TLC is needed to into bringing the monorail service back up to to the level it should be.

Stickers have been installed on the monorails reminding guests not to lean on the doors.

Thanks to a recent – and controversial – tax bill, several large corporations have handed out bonuses to their front line employees, including Wal Mart and AT&T. This past week Universal Parks and Resorts announced they would also be giving a $1,000 bonus to non-executive Team Members. Disney, who did follow suit when Universal raised the starting wage of its front line employees several years ago, has not announced any bonuses and instead is in the middle of another intense negotiation with union members.

One article I would recommend is How Theme Park Labor Markets Are Formed over at Parkscope. With unemployment levels where they are at, front line Disney Cast Members probably have more power and leverage now than they have ever had. Will they actually use that power to get a better deal from The Mouse? Most insiders don’t believe these Cast Members – who work in the trenches and deal directly with guests – would actually go on strike, and instead will end up settling for a lesser deal.

Over the past couple days and weeks, all of the restaurants located at the Edison complex in Disney Springs have opened the doors for guests. Enzo’s Hideaway is located directly next to the stairway at STK (although you can also access it from The Edison.) The other three restaurants will be on your left hand side as your walking up the bridge leading from the West Side into The Landing.

With Blaze Pizza being a huge hit at Disney Springs, Pizza Ponte definitely has to bring their A-game to compete. Whereas Blaze only offers custom made full pizzas, Pizza Ponte sells pre-made slices. At $7 a pop, the slices are priced comparatively to pizza sold inside theme parks, arenas, and state fairs. Pizza Ponte offers two different styles of pizza slices. Several varieties of thick-crust Sicilian style square cut slices, and The Big Roman, a tradition triangle cut slice of cheese pizza. While The Big Roman is certainly a large slice of pizza, its thin crust makes the $7 price tag seem a bit pricey. The square slices of pizza aren’t as large, but feel more substantial with the amount of toppings on each along with how good the thicker crust tastes.

The seating area for Pizza Ponte is relatively small, and definitely not a place you want to hang out for a long time. The “view” is off the nearby bridge, which makes sense as ponte is the Italian word for bridge, but Blaze Pizza’s waterside tables are a much more enjoyable way to enjoy your meal. It was also surprising that the paper plates the slices are served on get immediately soaked by the grease, and your “tray” is a piece of cardboard that generally you would find underneath a sheet cake from Publix. The service by the Cast Members has routinely been exceptional.

We did not eat at Maria & Enzo’s, but the airline theme is a fun. There is a lot of seating inside this table service restaurant and overall reviews have been extremely positive.

The Edison finally answers the question of “What if Disney’s STK and Universal’s Toothsome Chocolate Emporium had a baby?” The inside and overall theme of The Edison is steam punk, exactly like Toothsome (they even have two walk around characters who interact with guests, just like Toothsome.) The depth and quality of theming throughout the restaurant is at a higher level than Toothsome. While The Edison doesn’t offer any crazy milkshakes, it does have a whole bunch of insane menu options including a bacon appetizer in which strips of bacon are hung on a clothesline, “dancin’ corn dogs,” and a cake pop tree. We definitely have a pinch of Planet Hollywood presentation here, and I love it.

Enzo’s Hideway Tunnel Bar opened for guests literally last night, and reaction has been mixed. One thing is for certain, the serving size of the pasta entrees make the $7 pizza slices look like a much better value in comparison.

# 3 – Circle Of Life headed to the Disney Dump

Last year we looked at the lowest-rated WDW attractions and Epcot’s Circle of Life was only above Stitch’s Great Escape and the almost barren Innoventions East. Recently Disney announced the attraction would be going away, and the space would be used for the Performing Arts student workshop. This development raised the antennae of more than one Disney insider, as the space the Performing Arts group previously was located backstage in World Showcase. This has caused speculation of a new pavilion – with the hot rumor being Brazil – joining World Showcase.

# 2 – New legalese on Disney’s Do Not Disturb signs

As first reported by WDW News Today, Disney guests have started to find a new style of the traditional Do Not Disturb signs for their doors. The new signs indicate that the room is occupied, but Disney added specific verbiage at the bottom alerting guests that Disney has the right to enter the room. While Disney has not confirmed, it would make sense this is a new security measure put in place after the horrific shootings in Las Vegas last year. In a surprise to absolutely no one, many guest’s reaction to even the idea of Cast Members coming into their room has not been favorable (a feeling which can’t be helped by stories over the years of Cast Members being arrested for theft in rooms along with even worse offenses.)

During one stay at Caribbean Beach several years ago, we came back to our room to find another family’s set of luggage by the door, on the inside of the room. Disney said that it was a mistake by Magical Express, but it definitely felt odd – and a bit unsettling – that someone else had been inside the room (we had left a Do Not Disturb sign outside.)

With a deal over $50 Billion dollars, Disney acquired the rights to many Fox intellectual properties including the popular films Avatar, Die Hard, and classics like The Sound of Music. While comic book fans are glad that the Marvel Cinematic Universe will now have control over the X-Men and Fantastic Four, it seems for Disney the main reason for the deal is strictly getting content for their upcoming Netflix-like streaming service. As the owners of ESPN, no one understands “cord cutting” more than Disney, and a Disney-led streaming service has a lot of brands people are going to want. Disney is going to need this demand, as they are going to head into a competition where heavy hitters such as Netflix, Amazon, and Google (among others) have planted their flags. How we consumers get our entertainment is going to be the huge battle of the upcoming 2020s, and Disney is getting ready.

So there you have it: A Return to the SATURDAY SIX News Desk! See you next weekend for the latest installment of the SATURDAY SIX, where we’ll look at something fun from the world of Disney and Universal. If you enjoyed yourself, be sure to check out The Magic, The Memories, and Merch! articles, or, for your listening pleasure, check out the E-Ticket Report podcast. You can also follow Your Humble Author on Twitter (@derekburgan).

Are Disney’s Hotels Going to the Dogs? A Review

Special Thanks to crack staff photographer Brandon Glover, master art manipulator Matt Cleary, Mr. ‘Ohana Tim Grassey, and blogger to the stars Megan Stump for their invaluable assistance with this article. Be sure to also check out Brandon on The Park Blogger podcast with goofballs co-hosts Aengus Mackenzie and LitemAndHyde , while fellow Potterheads may enjoy Meg’s work on the Central Florida Slug Club.

4 thoughts on “SATURDAY SIX News Desk: A Look At Recent Stories In the Theme Park World”