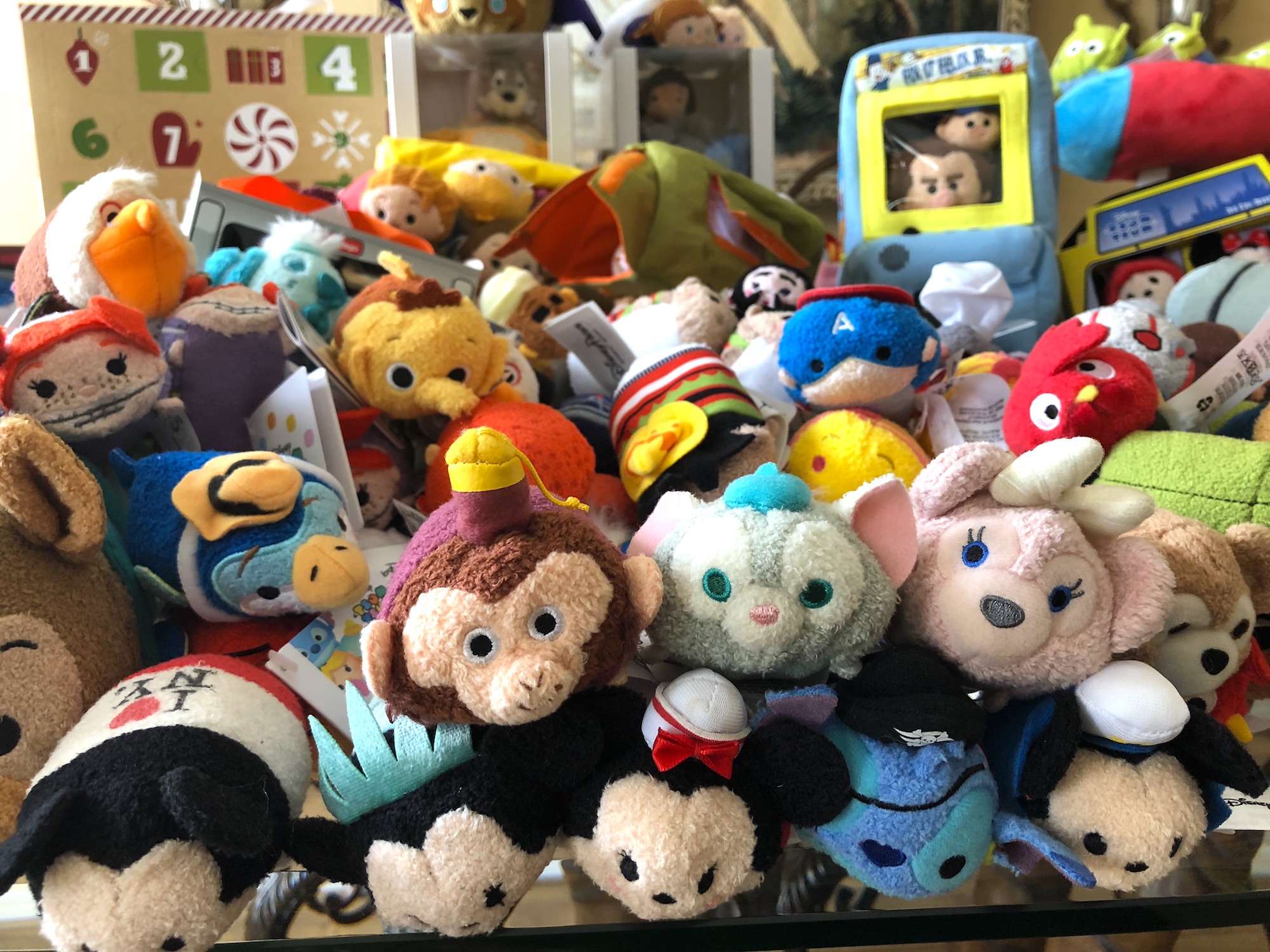 This week’s SATURDAY SIX takes a look at Tsum Tsums! Regular readers of our sister series – the Magic, the Memories and Merch! – know of our obsession with Tsum Tsums but may not realize exactly how deep it goes. Today we explain.

FOR THE UNINITIATED: Like pretty much all things that are next level bonkers, the Tsum Tsum craze started in Japan. Wikipedia – a source synonymous with always being 100% correct – says the name Tsum Tsum is derived from the Japanese verb Tsumu, which means “to stack.” These adorable plush toys are cylinder in shape, and can be easily stacked on top of each other. Like many Disney collectibles, there are exclusive ones that can be much harder to obtain than others. Today we are going to go over some of our favorite Tsums, starting with..

Recently I listened to a great podcast that debated the merits of Disney Cruise Line vs Royal Caribbean, with TouringPlans’ own stat nerd Fred Hazelton on the side of DCL. As a person who has sailed on both Disney and Royal Caribbean ships, I think both are absolutely incredible experiences, each having some pros and cons.

For ME, where Disney Cruise Line blows Royal Caribbean out of the water – pardon the pun – is in character experiences, Castaway Cay, and merchandise. In fact, the DCL ships have pound for pound the best selection of quality Disney merchandise anywhere. One of the items they have are DCL Tsum Tsums that you can only get on the the ships: Mickey and Minnie Mouse in their sailing outfits, along with a greatly themed pirate Stitch.

There are some Tsum Tsums that are only available in Disney Stores in specific cities around the world. It can be bit confusing for the average collector, because they also have “City Specific” Tsums that you can also order online at DisneyStore.com. For example, in the pictures below you’ll see two boxes of Mickey and Minnie Tsums representing Chicago and New York. The boxes you can get both at traditional Disney Stores in Chicago and New York, but you can also order online. However, the “I Love NY” Mickey and Minnie as the Statue of Liberty can only be bought in New York City. Sounds reasonable right? Of course not, which is why deep down every true Tsum Tsum collector is absolutely, certifiably 100% insane.

The Chicago Set has Mickey themed to a hot dog (definitely with no ketchup) and Minnie as a deep dish pizza (like you could make this stuff up.) As for the New York box set, Mickey is literally a “big apple,” while Minnie is wearing her “I Love NY” shirt.

Look how great the overall theming is. The boxes themselves are themed to a elevated subway car for Chicago and a city cab for New York.

Living in Florida, I was able to get a hold of the NY Tsums thanks to Mannhatanites Len Testa and Laurel Stewart. For Chicago, a dedicated SAT SIX reader reached out to me. So now we just need readers in: Hawaii, Los Angeles, Canada, Ireland, Italy, London, Mexico, Paris, and Spain. If you live in Minnesota, we good.

In my lifetime there has been several cases of “found money” in areas that just didn’t exist before. When I was growing up, everyone had a reasonable phone bill, with the only out of the ordinary charges being “collect calls” and “1-900 numbers.” (I have a long story to tell one day where my parents received a large phone bill and were about to kill me thinking I had repeatedly called an “adult hotline.” They called the number and found out it was a Spider-man play-by-phone game that was advertised in Marvel comic books at the time. They may have been actually been more embarrassed for me finding out it was that.) Anyhoo, now families regularly have $100 monthly phone bills for each family member.

Subscription boxes are another phenomenon that seemingly appeared out of nowhere. You name the product, and someone out there is making a subscription box for it. Disney has put out several types of subscription boxes over the years, including a mysterious one for The Haunted Mansion that seemed like it was made by the creators of the TV show LOST.

The Tsum Tsum Subscription Box service has changed over the past two years. At first, each month a box would come featuring two exclusive Tsum Tsums, one large, and one mini. More recently the offerings have included three mini Tsums OR a set of six EVEN SMALLER TSUMS, which are called “micro” size.

I use the Tsum Tsum boxes as part of the Nuclear Meltdown Protocol. If – or should I say when – the kiddos start to lose their minds for whatever reason, I pull out a subscription box to open and all of sudden everything is ok again.

One of my all time favorite Tsum Tsums came from the Subscription service, and it is this Ralph and Felix that came in a plush arcade cabinet.

As you can seen below, the more recent Tsum Tsum “boxes” have been character sets. They come with a card identifying who they are. Here is the Princess and the Frog set along with a Dr. Facilier I got at the Disney Outlet Store.

The next set comes from the bonkers Disney short Runaway Brain. A cult classic, this Academy Award nominated short has spawned several pieces of merchandise you’ll almost never see inside a Disney-run store.

If I had my druthers, we would only have the mini sized Tsums in our collection, but here are some of the micro sized ones that came in subscription boxes.

When it comes to “every day Tsums,” the vast majority of my collection comes from the Disney Outlet Stores. Once you start paying 99 cents (and often with a BOGO or Buy Two Get One Free deal) its hard to go back to the standard retail price of $5.95. However, there are certain Tsums that get released that I purchase at full price because I don’t want to risk them NOT making it to the Outlet. Almost all of these full price purchases are for Disney Park Tsums.

I’m a sucker for just about anything Tower of Terror related, so when I saw Goofy and Peg Leg Pete in ToT bell hop uniforms, I knew I was going to buy them.

These Haunted Mansion Tsums actually made it to the Outlet.

Splash Mountain is one of our family’s favorite attractions, so getting Brer Bear, Brer Fox and Brer Rabbit was a no-brainer. Brer Possum and the Buzzard were Outlet finds.

These Adventureland Tsums made it to the Outlet, but I bought the Little Orange Bird full price the day it came out because, c’mon, it’s the Little Orange Bird. I would probably consider the Enchanted Tiki Room one of my personal six favorite WDW attractions, and possibly the Jungle Cruise as well, so this set was a home run for me.

Here’s the Pirates of the Caribbean Tsums with another one of my Top 6 All Timers, the Jailer Dog.

Some of the selections from the Fantasyland set, including a hideous looking Tea Cup, a character from its a small world, a carrousel horse, and MR. TOAD.

This set was first released in the Bonjour! Village Gifts shop in New Fantasyland next to Gaston’s Tavern. It’s the Beauty & the Beast Human Again set. The carrying case is the footstool that the dog turns into thanks to the curse. Inside are the “human” versions of all the major characters, including the dog.

As a person growing up seeing the Junior Woodchucks on the Disney Afternoon, there was no way I wasn’t getting this incredible camping set. Not only did it have a tent, but each of the characters was wearing an themed outfit AND came with mini sleeping bags. Chip is dressed like s’more, Pluto as if a bear is eating him, Goofy as a lumberjack, and Dale as a Junior Woodchuck/boy scout.

TIME TO GO TO FORT WILDERNESS!!

As many Tsum Tsums that we have over here in America (spoiler alert: WAY TOO MANY) they have much more over at the Asia parks. The ones I was interested in the most were found in Hong Kong Disneyland and Tokyo Disneyland. These were Albert, from the Mystic Manor attraction, and Duffy the Bear’s friends Shellie May and Gelatoni. Getting these only came from shamelessly begging world travelers like TouringPlans’ own Daisy Lauren and Julia Mascardo. Abstract concepts like “pride” and “dignity” are fine and all that, but I’ll take these Tsums thank you very much.

We are a Christmas family, and the month of December is filled with non-stop Christmas movies and decorations. There have been many holiday themed Tsums released over the years, including a set based Mickey’s A Christmas Carol and giant advent calendars. While 1-800-GOT-JUNK may disagree, you can never have too many Christmas Themed Tsum Tsums.

There are still plenty more Tsums in our collection not pictured, such as characters from Zootopia, 101 Dalmatians, and others simply because I can’t find them. They may be lost to The Hoard. For more info on Tsum Tsums I would recommend the comprehensive website Tsum Tsum Central and the @DisneyTsum account on Twitter for day-to-day updates on what is happening in the Tsum Universe worldwide.

So there you have it: Inside the SATURDAY SIX TSUM TSUM OBSESSION! See you next weekend for the latest installment of the SATURDAY SIX, where we’ll look at something fun from the world of Disney and Universal. If you enjoyed yourself, be sure to check out The Magic, The Memories, and Merch! articles, or, for your listening pleasure, check out the E-Ticket Report podcast. You can also follow Your Humble Author on Twitter (@derekburgan).

The Six Most Unusual Souvenirs in EPCOT’s World Showcase

Special Thanks to our spirit animal Brandon Glover, Minnesota’s second favorite son @Dizwire, crazy cat lady – and our Fearless Leader – Laurel Stewart, and blogger to the stars Megan Stump for their invaluable assistance with this article. Be sure to also check out Brandon on The Park Blogger podcast with goofballs co-hosts Aengus Mackenzie and LitemAndHyde , while fellow Potterheads may enjoy Meg’s work on the Central Florida Slug Club. 9 thoughts on “Inside the SATURDAY SIX Tsum Tsum Obsession”