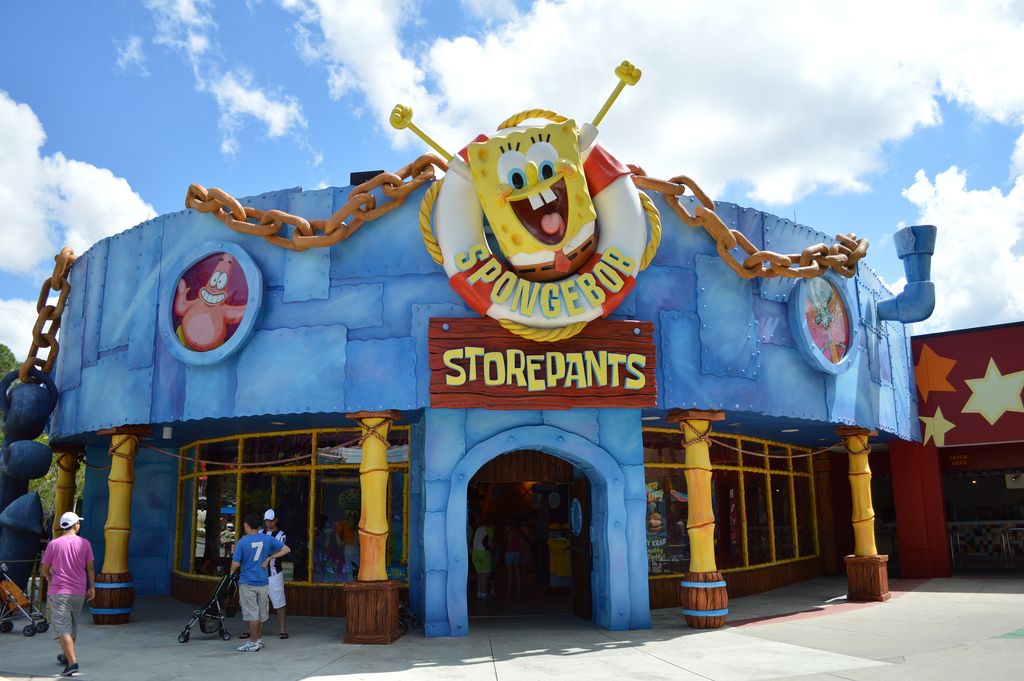 This week’s SATURDAY SIX takes a look at the 6 best gift shops at Universal Orlando! Until recently, gift shops were seen as a necessary evil at our favorite theme parks – annoyances that many guests either dreaded being herded through or mocked the existence of outright. One of the best gags in The Simpsons Ride involves the alien Kodos saying,

“Foolish Earthlings, don’t you know all rides must end near the gift shop?”

Thankfully, over the past several years gift shops at both Universal and Disney have become better themed and well merchandised, and several have even started to incorporate interactive features for their guests. It’s almost unbelievable to say it, but just as Harry Potter and the Forbidden Journey became possibly the first attraction in the history of theme parks to have a queue guests wanted to spend more time in, gift stores themselves are becoming features of attractions that guests can actually look forward to experiencing. Today we’re going to take a look at the best gift shops across Islands of Adventure and Universal Studios Florida, and let’s kickoff the countdown with…

Despite the great joke mentioned above, the Simpsons Ride is one of the few attractions at USF that doesn’t exit into a gift shop. The Kwik-E-Mart, the ride’s merchandise location, is right next to the attraction and is filled with the high level of self-deprecating humor that is found throughout Springfield USA. Signs above the merchandise include sales pitches like, “Today’s merchandise at tomorrow’s prices!,” “These items won’t buy themselves!” There’s even a sign at the registers that has a call back to an episode of the Simpsons television show as it warns the cashiers not to take checks from various people including Chief Wiggum, Homer J Simpson, and Homer J Fong.

The walls and outside windows of the Kwik-E-Mart are laden with ads for products including Farmer Billy’s Choco-Bacon-Bars (“It’s like chocolate and bacon had a baby in your mouth!”) while the variety of actual Simpsons related products found inside includes t-shirts, hats, plush, comic books and more.

Outside the store there is a photo-op available with Milhouse sitting on a bench and one of USF’s most hidden gems, the Simpsons pay phone. On the side of the Kwik-E-Mart closest to the Simpsons Ride, there is pay phone mounted on a wall with the character Nelson next to it.  Nelson has a word balloon saying, “Answer the phone dingus…it’s for you.” Walking by this phone will trigger it to ring, and picking up the receiver will treat you to a gag line by one of the various Simpsons characters including Chief Wiggum, Moe Szyslak, and Bart Simpson.

With a pressed penny machine, plenty of BORT items, and lithographs of the hilarious attraction posters such as Captain Dinosaur’s Pirate Rip-Off (a jab at Disney’s Pirates of the Caribbean ride and with the tag line “A ride so old it should be extinct!” couldn’t be more appropriate given the news this week), the Kwik-E-Mart is a must-do for any Simpsons fan.

One of the newer gift shops at Universal Studios Florida is the Hello Kitty Shop. Located in the former home of Lucy – A Tribute, the Hello Kitty Shop actually has a whole bunch of stuff that can appeal not only to young kids, but also to us theme park fanboys. For the kids there are several Hello Kitty photo ops along with an actual meet and greet with the feline star herself. For the fanboys, the store has incredible mash-ups that have Hello Kitty mixed with the worlds of Jaws, Back to the Future, Jurassic Park and more! These mash-ups are down as large size movie posters in the front of the store, but are also available as t-shirts, iPhone cases, and prints.

Aside from all the cute merchandise in the store, be on the lookout for the bakery case where you can get a whole bunch of elaborately themed Hello Kitty snacks that are only available at this location.

Comic books and theme parks are a natural fit. The biggest readers of comics are kids and adult males, two of theme park’s biggest demographics. The SATURDAY SIX has looked at the very best theme park related comic books, along with a follow up article looking at even more of them (and working on a third one if you can believe it.) After purchasing Marvel in 2009, Disney has started to bring comics slowly back into Walt Disney World, but both Universal Studios Florida and Islands of Adventure carry a lot of comic books, with Marvel Superhero Island having a working comic book store.

Stocked with single issue comic books, trade paperback collections, action figures, and other collectibles (Marvel high end guitars?), this is a store that the guys from the Big Bang Theory would have no problem spending some time in. Even better, the store has an entire backstory that is told in a comic book form via a huge mural by one of the registers. The story goes that the X-Men villain Magneto amassed a huge treasure trove of Marvel comics and was able to channel the entertainment value of the items themselves into pure energy.

The X-Men’s Storm ended up defeating Magneto and allowing guests the ability to purchase their favorite Marvel products. Talk about a story told in the Mighty Marvel Manner that would make Stan Lee beam with pride. Excelsior!

SpongeBob Storepants opened in May of 2012 and contains everything you could want in a gift store, despite the fact that SpongeBob himself has no attraction in the park (Squarepants and his pals are a part of the Superstar Parade.) As with the long-running SpongeBob cartoon series, the store caters to children but there is much for adults to enjoy as well as the Spongebob brand has a very smart wit about it and can work on several levels. One of my favorite jokes in the store is a simple board that has the phrase “Who says you can’t buy happiness?” painted on it. Upon closer inspection, the board sells for $7,450.

The outside of the store sets the show with a facade that looks straight out of the cartoon. The exterior has what looks like large pieces of metal welded together and supported upon bamboo poles that sit in barrels or crates. A running theme throughout this store is Mr. Krabs and The Krusty Krab, so you’ll see posters showing Spongebob himself making some crabby patties or signs mocking Mr. Krabs’ crass commercialism.

At the front of the store is a dedicated meet n’ greet area where you can have you picture taken with characters including SpongeBob, Patrick and Squidward. Once you pass that, the theming inside is bananas and almost transports you to Bikini Bottom itself.  Like the Kwik-E-Mart there are tons of sight gags and jokes all around the building as well as representations of many of the houses that appear on the show. The largest of these houses is SpongeBob’s pineapple which you can actually enter and get your picture taken with Gary the snail.

There is so much to see and take in at SpongeBob Storepants its easy to forget it’s actually purpose: to sell you stuff. Tons of great SpongeBob merchandise here including a wonderful Build-A-SpongeBob toy. It’s worth a walk through this store even if you have no kids or have zero inclination to buy any merchandise. It’s an experience. If more gift shops were like this we’d be waiting for the rides to finish so we could hurry up and shop.

Like many of the large gift shops you find on the “main street” of any theme park, the Islands of Adventure Trading Company is a One Stop Shop with sections dedicated to Marvel superheroes, Jurassic Park dinosaurs, Dr. Seuss characters, and the Wizarding World of Harry Potter. Where the Trading Company separates itself from similar type stores is the amount of theming found in and outside the building. To start off, by the registers there is a GIANT skeleton hanging from the ceiling of a mythical creature. Behind the counter there is actual an elaborate backstory to the skeleton, including the fact that it was discovered in Russia. Many guests who have been to the store countless times have walked by this impressive skeleton without noticing it because the store is so large and how many times do you need to look up?

Meanwhile throughout the rest of the store is tons of details getting across the “Old World Adventure” theme.  With fantastical details along the walls and even on the mannequins, it is worth doing a little of exploring  yourself before you exit the park.

There are a lot of great stores in the Wizarding World of Harry Potter, but for us the best is Weasley’s Wizarding Wheezes in Diagon Alley. The store perfectly replicates the fun madness of the store (as seen in Harry Potter and the Half Blood Prince) and contains a whole bunch of merchandise straight from the films (many of which are exclusive to the store.) Walking through this gift shop feels like walking on the actual set of the movie, complete with a Delores Umbridge on a Unicycle crossing the store (there’s even a smaller version of that which you can buy.) It’s one of the more fun gift shops you can walk though, and a dream come true for many a Potter fan.

There are some more great shops at Universal Orlando including the Film Vault filled with wonderful merchandise themed to movies (including Jaws, Psycho, Blues Brothers, and yes, even Sharknado), Transformer’s Supply Vault, Terminator 2 3-D’s gift shop (which is another insane comic book shop except focusing on DC and Image comics) and of course the Williams of Hollywood Prop Shop in USF selling actual items that were used insdie the park.

So there you have it: The Six Best Gift Shops at Universal Orlando! See you next weekend for the latest installment of the SATURDAY SIX, where we’ll look at something fun from the world of Disney and Universal. If you enjoyed yourself, be sure to check out The Magic, The Memories, and Merch! articles, or, for your listening pleasure, check out the E-Ticket Report podcast. You can also follow Your Humble Author on Twitter (@derekburgan). Special Thanks to crack staff photographer Brandon Glover, the protege Hunter “Elvey” Underwood, the Mistress of Merchandise Hedgehog’s Corner, and blogger to the stars Megan Stump for their invaluable assistance with this article. Be sure to also check out Brandon on The Park Blogger podcast with goofballs co-hosts Aengus Mackenzie and LitemAndHyde, while fellow Potterheads may enjoy Meg’s work on the Central Florida Slug Club.