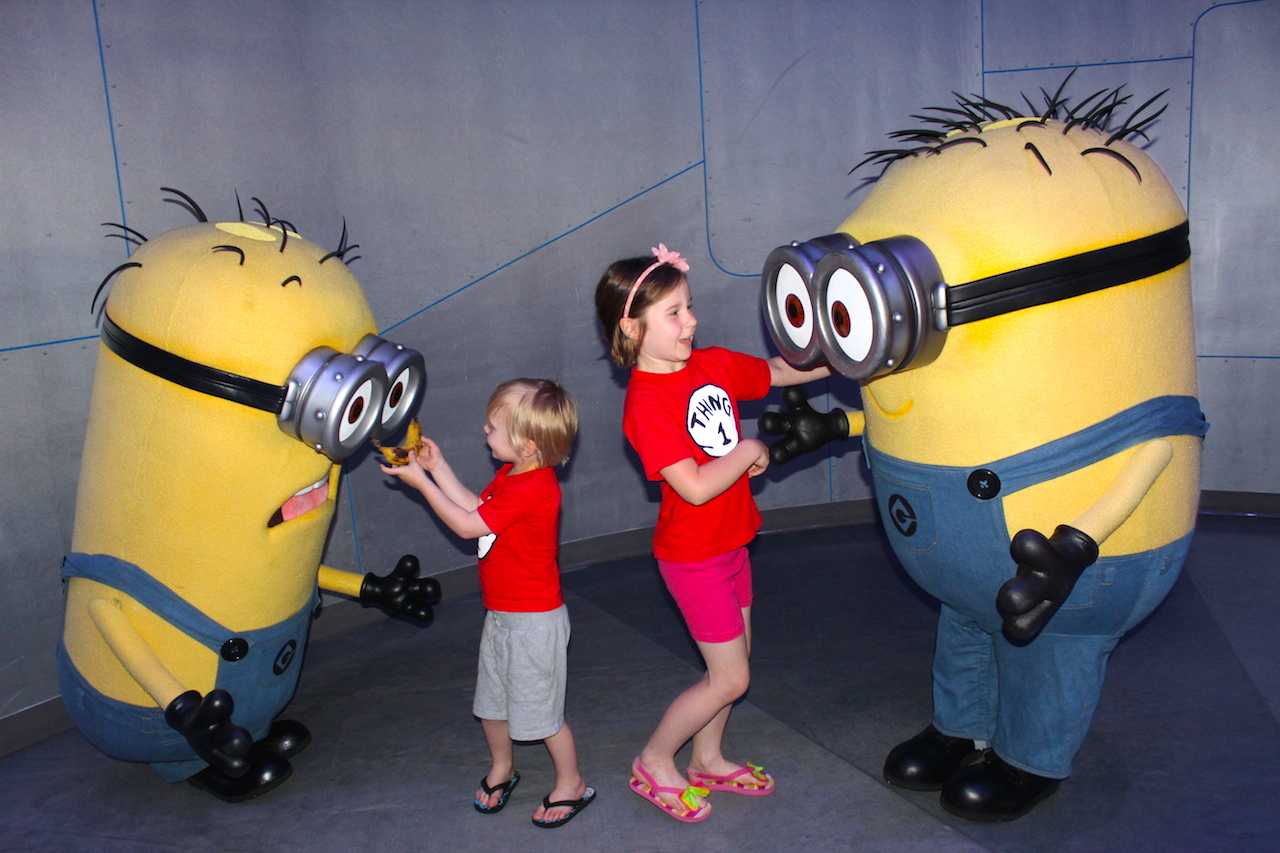 This week’s SATURDAY SIX takes a look at the Six Best Meet and Greets at Universal Studios Florida! About this time last year, Universal bought DreamWorks Animation for $3.8Billion. However, we haven’t see much of that deal reflected in the theme park world until this past week when a new meet and greet with Kung Fu Panda’s Po was announced for Orlando. In theme park fandom, many have speculated on what incredible attractions that DreamWorks characters could be a part of (who wouldn’t want a How To Train Your Dragon ride?!) but the “meet and greet factor” was mostly overlooked. Meet and greets are now a huge part of the Disney experience, and only getting bigger. In fact, even runDisney races have become so heavily integrated with characters that the surprise removal of them this week caused a  near meltdown on social media.

Now Po the panda is going to be meeting guests in Islands of Adventure, so we’re going to look at some of the fun meet greets located right across the way in Universal Studios Florida, and let’s kickoff the countdown with…

Having your picture taken with Scooby Doo is almost a rite of passage for any Universal guest. On any average day at the park you’re almost assuredly going to run into the canine sleuth along with Shaggy. Some days, you may find them posing with pics with Velma or Daphne. But on great days, you are able to find the entire Scooby Gang together and that can make for some really fun photos and interactions. You also have to get a shot of the Mystery Machine, which along with K.I.T.T., the General Lee, and the Batmobile is one of the most iconic vehicles in TV history.

The opening of Diagon Alley brought with it a lot of surprises in the form of character entertainment. We all swooned for the soothing voice of Celestina Warbeck and marveled at the creativity of the Wizarding Academy of Dramatic Arts in their Tales of Beedle the Bard shows, but two characters who always bring smiles to Muggle faces are the Knight Bus conductor and his shrunken head sidekick. Both are quick on their feet (not literally in the case of one of them) and the meet and greet starts the guest’s “Diagon Alley experience” in the best way possible.

If you bring kids to USF they are going to be drawn to the Minions like us theme park bloggers are drawn to free food. All the Despicable Me characters are fun to take photos with, but there is just something extra cute about those lovable Minions. While many of Universal’s meet and greets can talk to guests, the Minions do a great job of pantomiming to make some really fun interactions. PRO TIP: Bring a banana with you to USF just in case you happen to run into a Minion….

We all miss Back To The Future: The Ride, but while that may not be coming back, at least we still have Doc Brown and the time machines to take photos with. I’ve met with Doc Brown countless times and it is always amazing to see his character react to anything you toss at him. In fact, Doc Brown has been asked so much about The Simpsons Ride taking over his former residence, that sometimes you will see him with a clipboard detailing his plans to get the Institute of Future Technology back! If you go to Universal and you don’t come back with a picture with yourself and Doc Brown and/or the DeLorean you are officially doing it wrong.

This may be the most underrated meet and greet in all of Orlando. I personally GUARANTEE that if you stand outside the Shrek meet and greet (outside of Shrek 4D) and watch Donkey interact with guests, you will have a fun time.  It is always a blast! Donkey channels the good version of Eddie Murphy that we all love and not only talks to the people coming to take a picture, but will also have some fun with people watching or just walking by.

My #Millenial readers will have no idea what I’m about to talk about, but readers of a certain age will understand. In 2017, the character Robocop is an ironic joke. However, there was a specific time in this country when Robocop was cool. The simple feat of seeing Robocop walk had a nation talking. I bring up this story because that is the only thing I can compare what it is like seeing the Transformers at Universal interact with guests. It is unbelievable. Even when seeing it in person it is just about impossible to to find the seams. One of my personal favorite things is that – with Megatron – an actual villain is among the characters you can meet, so you can get some really great interactions like you do with Dr. Doom and the Green Goblin in Marvel Superhero Island.

There are times that character meet and greets transcend being a theme park attraction and become something much more important. Like many kids, Matthew wanted to meet Optimus Prime. Unlike other kids, Matthew has had severe ear problems since birth, so the Team Members brought him up to Optimus so he could put his hand on Prime’s body. This allowed Matthew to “feel” what it was like when Optimus talked to him. Wonderful moments like this happen regularly at Universal and Disney, almost all of which go unreported, because so many Team Members and Cast Members do everything they can to make all kids feel special.

Diagon Alley may be where you find most people, but – for me – Springfield USA is my favorite place to be at Universal. The jokes, Fast Food Blvd, Duff Beer, and a bathroom themed like the Comic Book Guy’s store? This place was made for me. It also has some great meet and greets with The Simpsons family (Homer, Marge, Bart, and Lisa) along with Krusty the Clown and Sideshow Bob. The characters look great and can be super fun to interact with.

So there you have it: The Six Best Meet and Greets at Universal Studios Florida! See you next weekend for the latest installment of the SATURDAY SIX, where we’ll look at something fun from the world of Disney and Universal. If you enjoyed yourself, be sure to check out The Magic, The Memories, and Merch! articles, or, for your listening pleasure, check out the E-Ticket Report podcast. You can also follow Your Humble Author on Twitter (@derekburgan).

Top Six Meet and Greets in the Magic Kingdom

Special Thanks to crack staff photographer Brandon Glover, photo wunderkind Mike Sperduto, my personal protege Hunter “Elvey” Underwood, Universal merchandise wizard Hedgehog’s Corner, UUOP’s “Brawny Man” Darren Schimdt and the lovely Nina Thompson, and blogger to the stars Megan Stump for their invaluable assistance with this article. Be sure to also check out Brandon on The Park Blogger podcast with goofballs co-hosts Aengus Mackenzie and LitemAndHyde , while fellow Potterheads may enjoy Meg’s work on the Central Florida Slug Club.

3 thoughts on “SATURDAY SIX: The 6 Best Meet and Greets at Universal Studios Florida”