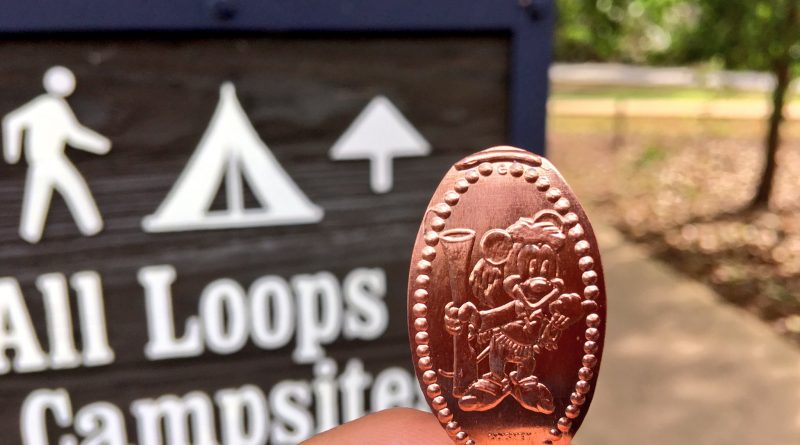 This week’s SATURDAY SIX takes a look at Walt Disney World! Regular readers of this fine blog series know how much we love theme park souvenirs (both real and imagined) and one of our absolute favorite items is pressed pennies. Not only are they one of the most affordable pieces of merchandise in the parks, they are easily collectible, and don’t take up much space. Pressed pennies are also items you can get at other places in Florida (including the Universal Orlando Resort, SeaWorld, and Legoland) as well as tourist locations across the country.

Now Disneyland – whose guests are already spoiled by having parks with tons of rides, nighttime parades, and seasonal churros – is hands down the worldwide leader in pressed pennies. For example, for the Disneyland 60th anniversary, the park debuted 60 new pressed penny designs. Meanwhile at the Animal Kingdom, guests can still get a Mickey’s Jammin’ Jungle Parade pressed penny, a design which spotlights a parade that ended in 2014. THAT SAID, Walt Disney World still has a whole bunch of reasons you, Dear Reader, should get into the pressed coin game, and let’s start off with…

Until recently, Disney lagged behind its competitors when it came to the actual books for guests to put their pressed pennies in. Legoland, SeaWorld, and Universal all offer books that came with an exclusive penny design. However, a couple years ago Disney came out with a new design that is artistically a true gem. In a great touch, the new books also contained spots to hold change that you are going to use in the pressed penny machines. The previous book design used a minimalist-style of art to represent various attractions across Walt Disney World. An even newer book features some classic characters along with parks, including Mickey Mouse and Daisy Duck. These are E-Ticket pressed penny books.

As we covered in our Six Things Your Family Needs To Pack For Your Disney Vacation, having quarters and pennies with you will save a lot of time and frustration trying to find a Cast Member to break your cash while in WDW.

While we are the types who like “running into” various machines on our travels, there are several ways to find out ahead of time where all the pressed coin locations are in WDW, including Disney’s own website. For even more convenience, a pressed penny machine locator was added to the My Disney Experience app.

Believe it or not, there are lot of pressed penny machines in Disney Springs. Even better, there are a good amount of new machines and new designs thanks to the rebranding from Downtown Disney to the Springs. I’m personally a big fan of pressed penny designs that incorporate the logos of places I enjoy, so while we had to pour out a 40 for the DisneyQuest penny, there’s still a great design at the World of Disney store. Keep your head on a swivel while walking through the shopping/entertainment district as there are machines inside several stores, outside others, and can be found in several restaurants. One of the newest machines is located next to restrooms by the Coca Cola store. The restrooms themselves are themed to the Disney Springs Fire Dept, and the coin designs have characters dressed up as firemen.

While cooling off this summer, take advantage of the pressed penny machines located at Disney’s Blizzard Beach and Typhoon Lagoon. Each water park only has one machine, but both contain designs unique to the individual water park. Both parks also have a penny design featuring something pretty rare in the world of Disney merchandise: pictures of Mickey Mouse not wearing shoes. That’s right, in these deigns Mickey is wearing flip flops and you get the kinda-weird look at the top of his feet.

As much as I love staying onsite at the Universal Orlando Resorts, because Universal doesn’t run the hotels none of them have pressed penny machines. Meanwhile, at WDW, just about every single resort has pressed coin machines. Personally, I love getting mementos of places we’ve stayed at, but I’ve never been a big magnet or keychain guy. Pressed pennies give me that small souvenir that helps instantly bring back memories of each trip.

Unfortunately, some of the resorts – including the Polynesian – have the resort’s “official” design only available on a pressed quarter instead of a penny. That means instead of the standard 51 cents (2 quarters and 1 penny), these designs cost $1.25 (5 quarters.)

The four Disney theme parks are a pressed coin fan’s dream come true. There are machines EVERYWHERE and some of them are incredibly themed. Granted, most machines are just like all the others, but occasionally you’ll run into a machine that is a marvel of design in and of itself. As for the actual penny designs, here is where you can even take your collection to an even more insane level by collecting certain characters or groups. You could look for just princess themed pennies, or Duck family members (Donald, Daisy, Uncle Scrooge etc), or Chip & Dale, The Fab Five, and more. The overall amount and variety of designs available is staggering. The Magic Kingdom has 34 machines alone, including a pressed dime machine in Tomorrowland. In Epcot you can find a penny design referencing a now defunct Future World Pavilion from the old EPCOT Center along with some really neat options in World Showcase featuring your favorite characters.

This Minnie Mouse design may be the weirdest looking penny in the entire Disney pressed penny universe. Something is just not right. It feels more like the Minnie Mouse you meet for pictures in Times Square than the one in Florida.

Two of my favorite attractions to collect coins from are Country Bears and Splash Mountain, but it is interesting that this particular Splash design features Mickey and Minnie playing in the water.

While not technically “Walt Disney World,” the Disney Cruise Line terminal in Port Canaveral can be considered an unofficial annex of WDW in a way that, say, Disney’s Vero Beach Resort isn’t (although major props to Vero for their incorporation of Crush the turtle in their main pressed coin design.) A sailing on the high seas with the Disney Cruise Line is a special experience, and it’s fantastic that they also offer pressed penny options for those sailing out of Port Canaveral (there are no machines for the Disney ships sailing out of Miami.) There are designs for each of the current four ships, one for Castaway Cay, and one for the Disney Cruise Line as a whole. I’m a huge fan of Royal Caribbean, but these penny machines are just one of the examples of “the Disney Difference” and why sailing on DCL may be for you.

Some of you reading this may not realize Disney has not one, but two highly themed minigolf areas in Fantasia Gardens (located next to the Swan & Dolphin) and Winter Summerland (located next to Blizzard Beach.) Like the water parks, each area has one machine with three designs. Of everything we have looked at so far, Fantasia Gardens has by far the weakest selection of any venue. None of the designs say “Fantasia Gardens” and only one really has any real connection to the area at all (outside there is a neat Sorcerer Mickey topiary, and the machine offers a Sorcerer Mickey design.) All three of Winter Summerland’s options are themed to the actual venue, and there is also one of those rare designs with Mickey’s feet being shown.

These pennies may be the “white whale” for some pressed penny enthusiasts. At Wide World of Sports, at the Visa Athletic Center, is a runDisney themed machine that many encounter only when there is a Health & Fitness Expo during a  race weekend. Its important to keep in mind that the location of this machine may change since it is a temporary install for the races.

So there you have it: The SATURDAY SIX Looks at PRESSED PENNIES! See you next weekend for the latest installment of the SATURDAY SIX, where we’ll look at something fun from the world of Disney and Universal. If you enjoyed yourself, be sure to check out The Magic, The Memories, and Merch! articles, or, for your listening pleasure, check out the E-Ticket Report podcast. You can also follow Your Humble Author on Twitter (@derekburgan).

The Best PRESSED PENNIES at the Universal Orlando Resort

A look at the Disney Cruise Line Pressed Pennies

Special Thanks to our spirit animal Brandon Glover, Captain Cruiseline Scott Sanders of the Disney Cruise Line Blog along with the help of intrepid intern Isabella, the sommelier of Tony’s Town Square Brian Carey, the SAT SIX Fun Squad of Parkscope Joe and Nick, and blogger to the stars Megan Stump for their invaluable assistance with this article. Be sure to also check out Brandon on The Park Blogger podcast with goofballs co-hosts Aengus Mackenzie and LitemAndHyde , while fellow Potterheads may enjoy Meg’s work on the Central Florida Slug Club.