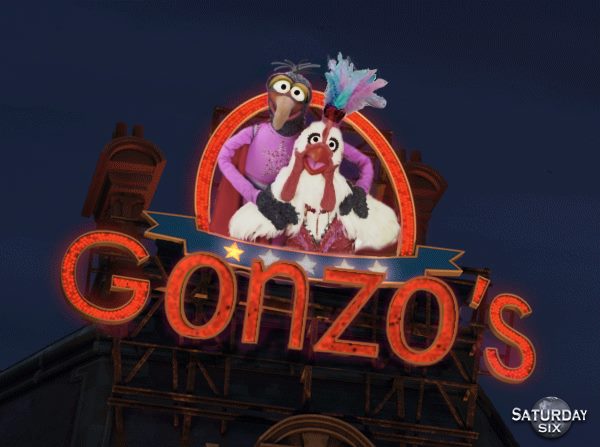 This week’s SATURDAY SIX is a truly special one as we once again dust off the blue blazer and step behind the SATURDAY SIX News Desk. What a week. If you’re like us you’ve been deluged with #Blizzard2016 pictures, the Oscars dealing with a diversity problem, and Donald Trump being Donald Trump. However we’ve been informed that a whole lot of stuff happened in the theme park world recently. So we took a page out of our old college playbook and pulled an all-nighter, cramming as much information as we could into our brains so that we could report back to you, Dear Reader, with all the relevant facts (and before we forget it all tomorrow). So sit back, know that you are getting all the news that’s fit to print (and plenty more that’s not), and let’s begin our countdown starting with…

# 6 – Pizza Planet Under Major Refurbishment. Coming Back With a New Theme?

First, some backstory. For years Jim Hill, an icon of theme park media, has been telling the story of how the Muppets were originally going to be used in Disney’s Hollywood Studios. One of the things that never ended up coming to fruition was The Great Gonzo’s Pandemonium Pizza Parlor. Can you imagine a Muppet’s themed restaurant, with a kitchen run by the Swedish Chef, where Mama Melrose’s Restorante Italiano now sits?  Dare to dream.

Now it’s time to put on the detective hat. Recently Pizza Planet at DHS closed down for a long refurbishment. What should have been a wonderfully themed venue themed to the world of Toy Story was instead one of WDW’s most bland restaurants/arcade. Back at the D23 Expo, Disney unveiled details of the upcoming Toy Story Land expansion. This new land is going to built on the other side of the park, so it would be strange to have a Pixar related restaurant (no matter how poorly themed) so far away from everything else. After the construction walls went up around Pizza Planet, WDW uncharacteristically put up a lot of humorous signs on the walls. Gags that are much more in line with the type of jokes  you see in the building of say… Muppet*Vison 3D. In a recent edition of the Disney Dish podcast, Jim Hill said that instead of a Gonzo themed restaurant, we may actually see The Swedish Chef’s Cooking School.

Will Pizza Planet return from it’s refurbishment as a Muppets themed restaurant? Time will tell, but it is almost assuredly not coming back as Pizza Planet and for that we can all be thankful. To stay up to date on this story follow the boys over at WDWThemeParks.com.

As of this writing it has been 490 days since DHS closed the Studio Backlot Tour. Since that time other attractions have joined the hit list. The Legend of Captain Jack Sparrow. The Magic of Disney Animation. The Cars and Phineas and Ferb meet and greets. Mulch, Sweat, and Shears. On April 2nd, DHS will close Lights, Motors, Action! Extreme Stunt Show, Honey, Shrunk the Kids Movie Set Adventure, Watto’s Grotto, the Monsters Inc meet and greet, and the Studio Catering Co quick service restaurant. The Earffel tower, one of our favorite WDW park icons, will soon be finding its way to the Disney Dump and we’ll also be losing The Writer’s Stop (home of the famous carrot cake cookie. You can still get the cookie at Sweet Spells, but it’s not the same).

That’s a lot of stuff, especially for a park that has never been known for having a lot of rides and attractions in the first place. With Star Wars Land and the previously mentioned Toy Story Land not opening any time soon (and that may be the understatement of the year), guests who haven’t been keeping up with the closures at DHS are in for a quite a surprise when they enter the park this summer (and this fall, this winter, 2017, 2018, etc). Guest Services may see as much action as they did during the disastrous Villains Unleashed party back in 2014.

Will DHS do anything extra to “make good” on charging a full day price for a park going through this big of a change? History tells us possibly not, as Disney’s California Adventure just made guests suck it up during their transition from The Park No One Liked into one featuring Cars Land. But to be fair, guests out there were steps away from Disneyland. Guests at DHS are steps away from EPCOT, another park with a shortage of rides. If we had our druthers, we’d have DHS bring in a rotating cast of rare characters for meet and greets and allow each guest an automatic FP+ to meet one of their choice.

# 4 – It’s Not Just Theme Park Attractions That Get Delayed… The Internet broke last week with the news that Star Wars Episode VIII would be delayed. The movie was scheduled to be released on May 26th, 2017, but was pushed back to December 15, 2017. The Episode VIII news was covered by just about every media outlet in the known world. In fact at least 100 news outlets possibly were created just to make sure we got this story. This was an interesting decision by Disney because moving Episode VIII put it directly into competition with James Cameron’s Avatar 2, which was scheduled for Christmas Day 2017. Considering Disney put in a rumored 400 Million dollars (and possibly more) into building Avatarland at Animal Kingdom, it is not in their best interests to cut the legs out of that movie by positioning a sure hit in Star Wars right before it.

Just throwing this out there, but the night of the Star Wars announcement, Your Humble Author speculated on why Disney made the controversial move.

The very next day it was announced that Avatar 2 would not be coming out on Christmas Day. There is no timetable on when we may see another Avatar film. Disney also filled the open gap in its film schedule by moving Pirates of the Caribbean: Dead Men Tell No Tales into the May 26h slot. This is a movie that possibly no one outside of Johnny Depp’s accountants asked for, but we’re getting it anyway.

For a long time the “Best Kept Secret” at Walt Disney World was the Disney Vacation Club. Today, the best kept secret is the next level bananas FP+ lines you just may run into when out at the parks. Sometimes they are so long it’s hard to believe they are even real. In a move that surely has prevented Guest-on-Guest violence, you’ll notice Cast Members holding “FP+ Line Starts Here” signs.

There are several factors that contribute to this perfect storm of a queue. It takes more time for guests to line up their MagicBands to the readers compared to a CM just quickly checking the time off an old legacy Fast Pass. Guests not understanding the FP+ system clog up the space while talking to CMs. It is also rumored that WDW has put in a lot extra FP+ into the system to make sure guests feel they are getting the selections they want.

So now we have a whole bunch of guests in ridiculous lines in an unthemed outdoor make-shift queue, who then walk briskly through an actual themed queue once they get past the bottleneck. Can Disney fix this problem? There’s certainly some short term things they can do to make the guest experience better. Move the FP+ scanners deeper into the attraction. Install more FP+ scanners or at least separate them enough to truly allow multiple people to use them at once (just like at the turnstiles at the front of the park, many guests don’t realize a MagicBand reader is open because of how they are set up and a CM rarely – if EVER – alerts them to an open one). Long term maybe Disney can figure out a way where one person can scan in for an entire group. I don’t have all the answers, but I do know that WDW ultimately has to do one specific thing to help alleviate this problem: Fix it!

There’s a famous expression, one that most people say incorrectly, in you can’t eat your cake and have it too. After 9/11, Disney lobbied for – and got – a No-Fly Zone status instituted for the airspace above its theme parks. Universal doesn’t have this status. Nor does Six Flags, SeaWorld, or any other theme park or amusement park in the United States. This was all fine and dandy, until Disney wanted to use drones.

We heard about Disney applying for patents to use drones in theme park shows a while back, but not much since. On episode 95 of the Disney Dish podcast with Jim Hill and Len Testa, they discussed the possibility of a new show using drones (which they refer to as “Flixels“) coming to Seven Seas Lagoon as part of Disney World’s 50th anniversary in 2021. This show would be a replacement for the Electrical Water Pagent.

Will Disney get their FAA exception? Well, we opened this segment with an oft-used expression and we’ll close with another one: money talks. Disney has a lot of money and even more influence, especially in the state of Florida. You can all but take it to the bank that we’ll be seeing drones in some capacity at Walt Disney World in the near future.

# 1 – END OF THE WORLD NOTICE: LeFou’s Brew Gets a Seasonal Version with LeFou’s Winter Brrrew

Not a dream! Not a hoax! Not an imaginary story! This past week Disney unveiled a seasonal variant to LeFou’s Brew. Available at Gaston’s Tavern, this hot cocoa drink certainly makes one think about its similarity to hot Butterbeer, which was introduced to tremendous success during last year’s Celebration of Harry Potter. So similar that we wonder if the newly introduced Butterbeer Fudge will be followed by a LeFou’s Fudge. So there you have it: The SATURDAY SIX News Desk: Bait You Can Click On. See you next weekend for the latest installment of the SATURDAY SIX, where we’ll look at something fun from the world of Disney and Universal. If you enjoyed yourself, be sure to check out The Magic, The Memories, and Merch! articles, or, for your listening pleasure, check out the E-Ticket Report podcast. You can also follow Your Humble Author on Twitter (@derekburgan)

Six Events That Will NOT Be On Any Theme Park Calendar

Special Thanks to crack staff photographer Brandon Glover, the Keymaster Tim Grassey, master photo manipulator Matt Cleary, and blogger to the stars Megan Stump for their invaluable assistance with this article. Be sure to also check out Brandon on The Park Blogger podcast with co-hosts Aengus Mackenzie and Brian Carey.

2 thoughts on “The SATURDAY SIX News Desk: Bait You Can Click On”