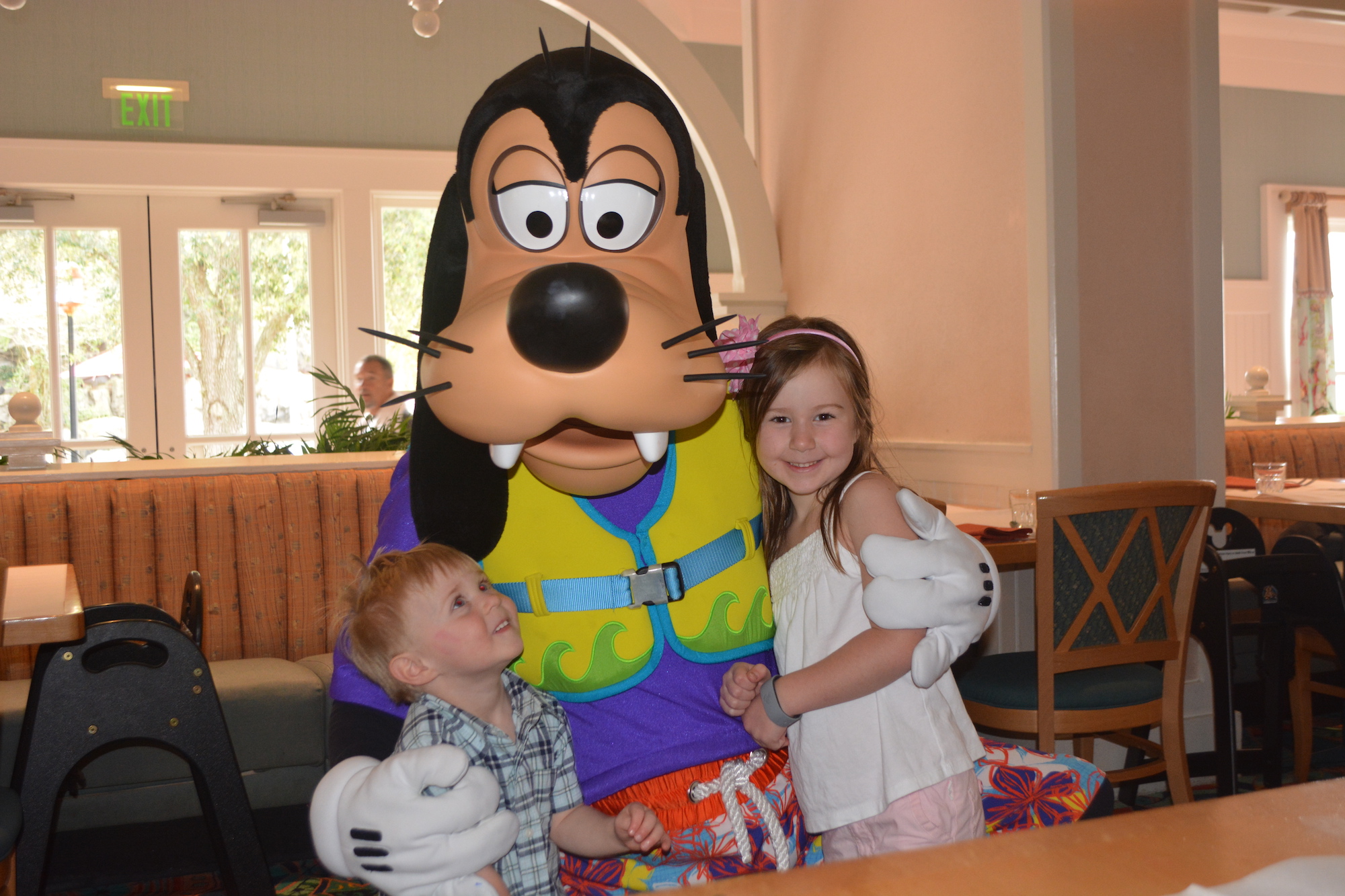 This week’s SATURDAY SIX takes a look at Six Reasons We Love Disney’s Yacht & Beach Club Resorts. Disney has three classifications for their resorts: Value (including Pop Century and Art of Animation), Moderate (Port Orleans Riverside and Fort Wildnerness), and Deluxe (Wilderness Lodge and BoardWalk). Today we are going to look at two of the Deluxe offerings with Disney’s Yacht & Beach Club Resorts.

Everyone who has tried to make an ADR for a Disney World restaurant knows there are several venues that can be extremely challenging to get, especially if you want a specific time or have a large group. Be Our Guest, Cinderella’s Royal Table, and Le Cellier are among Disney guests’ hardest to get reservations, but generally provide an experience that makes the effort to make the reservation worthwhile. Beach Club’s Beaches & Cream Soda Shop – thanks to its relatively small amount of seating inside – can also make one pull out hair in frustration when trying to get an ADR, but it’s worth it.

While Beaches & Cream offers a menu with burgers, hotdogs, and fries along with a ton of great ice cream sundaes (the peanut butter loaded No Way Jose is one to die for,) the big draw here is the signature Kitchen Sink. What separates the Kitchen Sink sundae from other outrageous desserts on property is the presentation. Not only is the dessert itself served in a mock kitchen sink – which unfortunately, you can’t keep – (we’ve asked, repeatedly) but the entire Beaches & Cream staff gets in on the action when one is delivered to a table. The overhead lights dim, an alarm light goes off, and your server reads off the list of Kitchen Sink ingredients, with the whole staff joining in with “and a whole can of whipped cream!” Trying the Kitchen Sink is a true Disney experience, and one that should be on every fan’s bucket list.

Located near Beaches & Cream is Ship Shape, an area which guests of all ages can get massages or even a hair cut at the salon, but what impressed us was the gym component. Open 24 hours, and available to guests at both the Yacht & Beach Club Resorts, the Ship Shape gym has everything you need to get your pump on (or to work off those Kitchen Sink calories.) Ship Shape is not one of those hotel gyms that looks like no one has used it in years, but instead offers state-of-the-art equipment that will rival anything at your home fitness center.

Here at the SATURDAY SIX we love character meals and we love Disney buffets, so you knew Beach Club’s Cape May Cafe was going to make our list. Featuring Goofy, Minnie Mouse, and Donald Duck (dressed up in their beach going garb), Cape May has both breakfast and dinner time slots available, but characters are only at “Minnie’s Beach Bash” breakfast. While we are partial to breakfast as we eat our weight in Mickey waffles and bacon, its at the New England-style clam bake dinner buffet where you can really get your some value with great seafood selections (for Florida that is. Those actually from New England may be used to a higher standard.) For breakfast, we’ve gone to Cape May several times and the characters seem to come around quite often, so you’ll have more than enough opportunity to get all the pictures you want and it is generally easier to get an ADR for a time you want compared to other character buffets such as Chef Mickey’s or Crystal Palace.

Because the Yacht and Beach Club share so many amenities, it becomes easy to think of them as one large resort. While there are some differences between the two (including the Beach Club’s light blue exterior compared to the Yacht Club’s light grey facade,) they feel like a cohesive whole. A nautical theme abounds at Yacht Club, where you can find scale models of boats and subtle compass designs throughout. The Beach Club themed after a New England seaside cottage, and most find the resort the more kid-friendly of the two (a feeling which can start in the lobby as guests can get some great photos sitting among the many unique chairs.) Like the Grand Floridian, the overall vibe of the Yacht & Beach Club resorts are more “elegance” rather than being immersed among Disney characters.

Staying at the Yacht or Beach Club has you located right in the middle of a whole bunch of awesome stuff at Disney property. While Disney offers boat transportation to both Epcot and Hollywood Studios, you are within walking distance of each. You’re also right across the way from Disney’s BoardWalk Resort, which can be a great place to spend an evening. Ice cream at Ample Hills, drinks at AbracadaBar, and listening to the dueling pianos at Jellyrolls? There’s worse ways for a couple to spend a date night. We also love taking the short walk over to the nearby Swan and Dolphin hotels and visiting some of their incredible restaurants such as bluezoo and Il Mulino. Does the family enjoy mini-golf? If so it’s worth a quick walk over to Fantasia Gardens. For as great as the “monorail hotels” are, you are closer to a lot more things when staying at the Yacht & Beach Club, especially when you factor in dining at the nearby World Showcase.

Walt Disney World has a lot of great pools among its 26 resorts, but the consensus pick for the best of them all is the Yacht & Beach Club’s Stormalong Bay. With a lazy river, sandy beach, large swimming area, hot tubs, and an E-Ticket slide, Stormalong Bay is almost a water park in and of itself. The pool’s immense popularity is well deserved, as the overall theming is exceptional. While the kids run back and forth to the large pirate ship slide, adults can enjoy a beverage at the Hurricane Hannah’s pool bar and enjoy tubing on the lazy river.

With Crew’s Cup Lounge, Ale & Compass, and Yachtsman’s Steakhouse at the Yacht Club, Yacht & Beach Club guests are steps away from some terrific dining. The truffle fries and sandwiches at Crew’s Cup can make for a great lunch without breaking the bank. Ale & Compass Restaurant is the old Captain’s Grille under a new “gastropub” label offering interesting takes on New England comfort food along with hearth oven pies. For foodies, Yachtsman’s Steakhouse delivers an upper-level Disney Dining Experience that rivals the best WDW has to offer.

So there you have it: Six Reasons We Love Disney’s Yacht & Beach Club Resorts! See you next weekend for the latest installment of the SATURDAY SIX, where we’ll look at something fun from the world of Disney and Universal. If you enjoyed yourself, be sure to check out The Magic, The Memories, and Merch! articles, or, for your listening pleasure, check out the E-Ticket Report podcast. You can also follow Your Humble Author on Twitter (@derekburgan).

Special Thanks to crack staff photographer Brandon Glover, In-N-Out connoisseur and Mr. Anti-Tipping Tom Bricker, Jammin’ Julia Mascardo, and blogger to the stars Megan Stump for their invaluable assistance with this article. Be sure to also check out Brandon on The Park Blogger podcast with goofballs co-hosts Aengus Mackenzie and LitemAndHyde , while fellow Potterheads may enjoy Meg’s work on the Central Florida Slug Club.