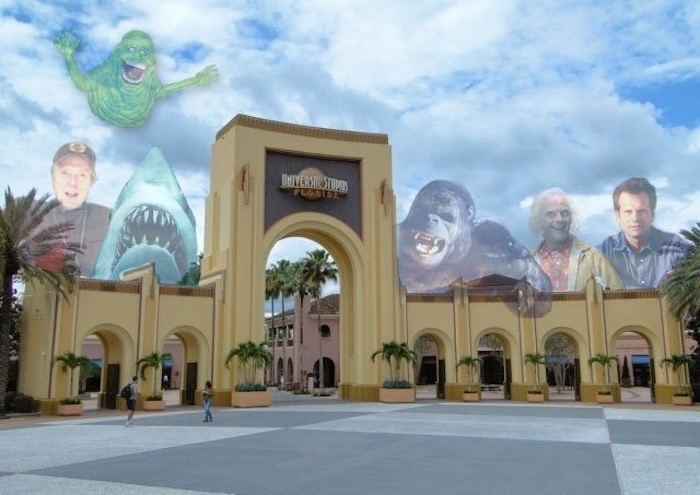 This week’s SATURDAY SIX takes a look at Six Things We Lost From the Theme Park World in 2015. As theme park fans, we’ve had a lot to be thankful for this year. However, as much as we are looking forward to the upcoming Star Wars Land at Disney and Universal teaming up with Nintendo, it wasn’t all good news. This year we had to say goodbye to some old friends. In the case of Captain EO, we had to say goodbye again.Today we pay our respects to some of those that we lost in the past year, starting with…. The classic NBA logo is a beautiful silhouette of Jerry West. In Universal’s CityWalk, the NBA City restaurant recreated that logo as a giant statue, except it looks as it was created by Saruman to scare away hobbits in Lord of the Rings. So that’s your first impression of this fine eatery. Once you got inside the seating area was deceptively small, but the menu was actually pretty decent. There were a ton of TVs in the restaurant, the arcade area was really good, and it had a fantastic green screen area where guests could get pictures taken and have their faces put onto actual NBA photos. That’s right, you could get a picture of yourself dunking in an NBA game or standing on the foul line watching DeAndre Jordan brick another foul shot. One of the best photo experiences at Universal or Disney, it was that good.

While NBA fans no longer have NBA City to go to at Universal, they do have an NBA Experience coming to Disney Springs to replace DisneyQuest. Five floors of NBA City? As Jerry Seinfeld would say, “Good luck with all that.”

You could probably book a good Lollapalooza style event just using musical acts Disney has kicked to the curb over the past few years. Joining Off Kilter on the main stage will be Mulch, Sweat and Shears, who played their last song at DHS on October 10th. Unfortunately, DHS fans are used to the mourning process as they have lost a lot over the past few years. Studio Backlot Tour. The Legend of Jack Sparrow. The weird lounge that replaced Legend of Jack Sparrow. The Magic of Disney Animation. Mulch, Sweat and Shears joins this hit list and it might not be the last one as rumors persist Muppets might be in the path of Star Wars destruction.

Having a theme park retail store ranked this high on this list may seem questionable to you, Dear Reader, but this one sticks in my craw. I’ve always loved Villains in Vogue at Disney’s Hollywood Studios. It’s very rare we get anything themed to “the bad guys” at the parks. At the Magic Kingdom we have Gaston’s Tavern, and over at Universal they have villain’s alley in Marvel Superhero Island. But what else? Villains in Vogue at least used to try and be a store with a good amount of merchandise dedicated to the actual Villains (such as plush for the Siamese cats from Lady & the Tramp). While most of the “bad guys” items have been removed for a while, at least we had the window displays. However those left (to be replaced by “Made With Magic” stuff) and even the name was changed this past summer to Reel Vogue. A once proud merchandise location offering a unique feel and now it is just another generic Disney store. It is the retail shopping experience equivalent of the ending to One Flew Over the Cuckoo’s Nest.

A 2015 Burgy Award winner (for “not being as bad as we thought it would be”), the Canadian Lumberjacks show in EPCOT’s Canada Pavilion had its run unceremoniously ended in late November with little notice or kerfuffle. Lasting just over a year, the Lumberjacks were given the bum’s rush and now are back in the Great White North trying to get maple syrup out of trees, watching hockey, eating backbacon and whatever else they do up in Canada. We will miss the log rolling, the log splitting, and the flannel.

We’ve had to say goodbye to a lot of classic Universal Studios Florida attractions over the years, but they’ve always been replaced by something even better. Kongfrontation gave way to Revenge of the Mummy, one of the most underrated coasters in Orlando. Back to the Future: The Ride stepped aside for The Simpsons Ride and all of Springfield USA. Most recently we lost Jaws, an opening day attraction and possibly Universal’s most well known ride, for Diagon Alley. In 2008 Disaster! took an outdated Earthquake attraction and made it fun again. With an amazing preshow featuring Christopher Walken (using Musion technology), the ride culminated with an always HILARIOUS video of The Rock in Mutha Nature.

With the Fast and Furious franchise skyrocketing in popularity, it was only a matter of time before they made their way into the Orlando parks. In typical Universal fashion, in August an accidental email leaked that Fast and Furious: Supercharged would be coming to USF, replacing Disaster! If anything could help make us forget Christopher Walken as Frank Kincaid, the role he was born to play, it’s Vin Diesel. Well, maybe not, but we hope the ride is good anyway. Universal Creative’s track record is so strong right we’ll trust them on this one.

This is where the story gets interesting. When Universal announced Fast and Furious Supercharged was coming, they announced that Disaster and Beetlejuice’s Graveyard Revue would be leaving. We were told the last date for Beetlejuice would be December 3rd, and there was actually a decent amount of online support trying to “save” the show.

However, in a shocking last minute reprieve of sorts, Universal announced there actually would be more Beetlejuice shows in December and continue into the first week of January 2016. What makes this story even better is that we have heard from several sources in the know that Universal announced upcoming Beetlejuice shows before alerting the cast. When Diagon Alley opened in 2014 it was nearly flawless, but one of the things which still has us scratching heads is the lack of capacity for the smash hit Florean Fortescue’s Ice-Cream Parlour, While lines stretch out the door in what is arguably the best ice cream shop in the Muggle world, the place next door – Madame Malkins – had an extra room dedicated for a queue that was never used.  A non-themed room below, but having the pretty cool Eeylops Owl Emporium above, this was the only place in Diagon Alley where you never saw a single person. The space is now the home of Shutterbuttons where Muggles can partake in a magical Photo Connect experience.

“Do you believe in miracles?!” – Al Michaels

As the saying goes, reports of Wimpy’s death at Islands of Adventure were premature. It’s true, last year I wrote the obituary for Wimpy’s, my white whale, thinking I was never going to see the restaurant open for business. Then, this past summer, like a gift from Heaven above, Wimpy’s opened for a limited time. Even better? I WAS THERE. I still can’t believe it, and every time since I have gone back to Universal Wimpy’s has sat dormant in its closed state. Maybe I dreamed it. Maybe I hallucinated it. Whatever the case may be, Wimpy’s is now off my bucket list.

So there you have it: In Memoriam – Six Things We Lost From the Theme Park World in 2015. See you next weekend for the latest installment of the SATURDAY SIX, where we’ll look at something fun from the world of Disney and Universal. If you enjoyed yourself, be sure to check out The Magic, The Memories, and Merch! articles, or, for your listening pleasure, check out the Pardon the Pixie Dust podcast. You can also follow Your Humble Author on Twitter (@derekburgan)

Special Thanks to crack staff photographer Brandon Glover, #blocked and reported for spam Michael Sheehy, Who Knew But Drew of OU, and blogger to the stars Megan Stump for their invaluable assistance with this article. Be sure to also check out Brandon on The Park Blogger podcast with co-hosts Aengus Mackenzie and Brian Carey (who gets a special No Thanks this week after his week long trip to Disneyland resulted in a total of two pictures taken.)

FINAL PLUG! Did you know The Unofficial Guide to Universal Orlando has a special edition of the SATURDAY SIX in it? Finally, someone came up with an actual reason to read a book. PRE-ORDER this baby now! (For every copy sold, a percentage of the profits* go towards buying a DVD of the Seven Dwarfs Mine Train rap video.)

18 thoughts on “SATURDAY SIX: In Memoriam – Six Things We Lost From the Theme Park World in 2015”