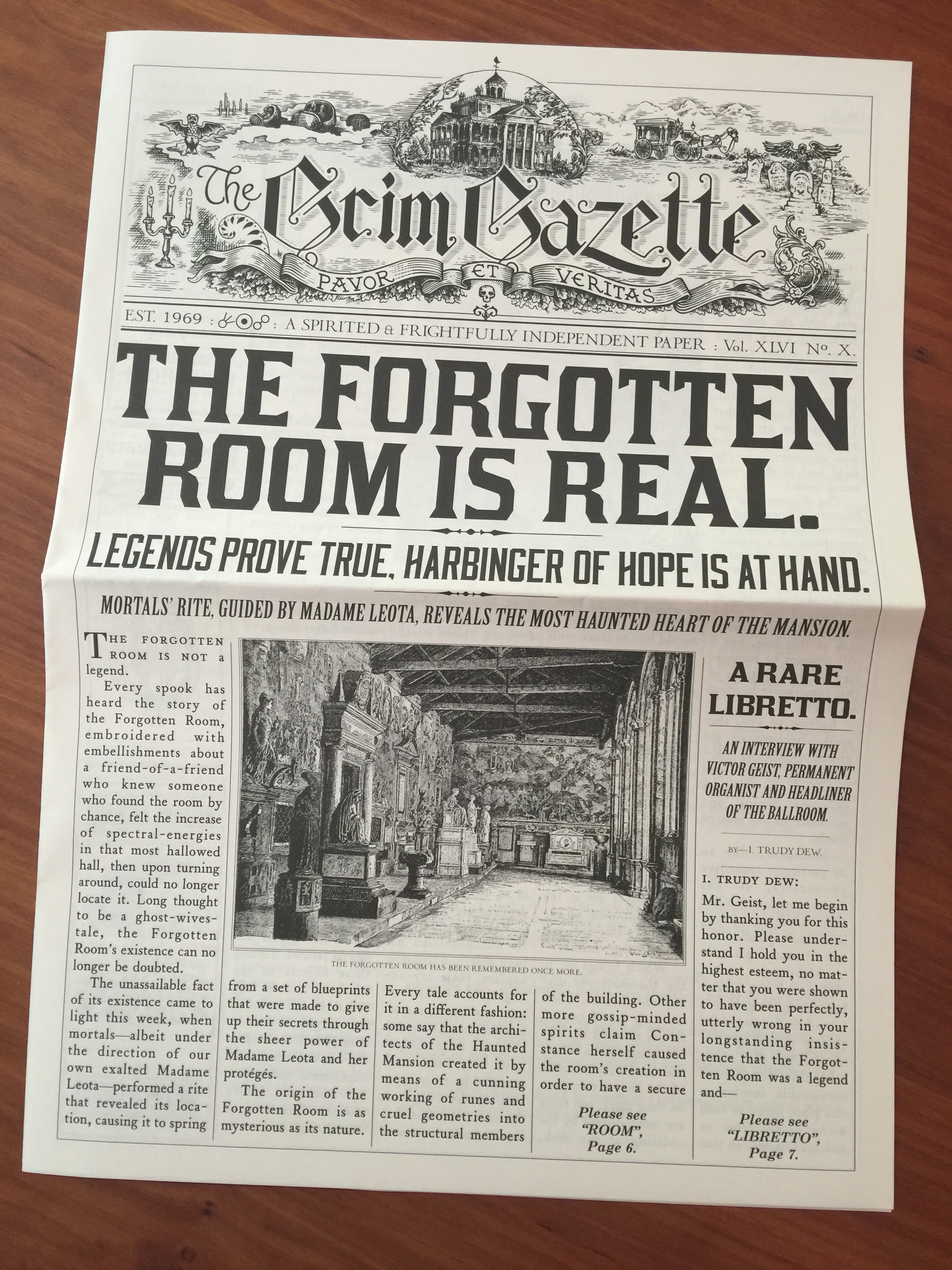 Welcome to part three of the Ghost Post mystery box series, reviewing the contents of Disney Merchandise’s Haunted Mansion puzzle subscription. To catch up with where we are, you’ll want to take a quick peek at Ghost Post Part 1 and Part 2.

The third Ghost Post box retains the now-familiar format. The only differences to the external carton are that this box is labeled for “N.E. Plott,” while the others were addressed to “M.T. Graves” and “I.M. Mortal,” and the back of the box had, as I predicted, a drawing of the roofline of the mansion, thus completing the picture. Opening the box, we agin see a few displayed artifacts and an envelope. The artifacts included a saucer, obviously intended to go with the teacup from Box 1. The saucer is beautiful, perhaps my favorite item from all three packages, but even at first glance it’s plain that there is a hidden message in the design, which will no doubt be revealed by the cup’s mirrored center band. A third packet of cards, this time much thicker. The previous packets had a Tarot card feel and contained about a dozen cards each. This time the cards were clearly modeled on a deck of standard playing cards, with 53 cards arranged into numbered suits. A thaumatrope, which is a two-sided paper device used to create an optical illusion. This gave the same general feel as the phenakistoscope included in Box 2. Underneath the cardboard shipping display were two more artifacts: a Ouiji Board-like cardboard playing surface (with lines depicting the various sizes of the last few iPhone models) and an unidentified cardboard model kit printed with the saying “Happy Haunts Materialize.” The envelope contained a third edition of the “Grim Gazette” and an instructional letter. As with the previous boxes, the letter had to be dampened with water to reveal the true message. The hidden message reads: “We are so lucky to have you – such a talented mortal – on our side. A human who can see what ghosts cannot – that is rare indeed. The bounty of the Forgotten Room has absorbed substantial spectral energy. With your powers of perception, use these objects to restore our ability to travel beyond the Mansion. As an expert tasseographer, reflect on what these leaves tell you. Remember, proper ghosts set their teacups upright on their saucers. Thread this [thaumatrope] with string and wind it up. [A spirit board] useful for communicating with ghoulish incantations. Should your efforts be successful this will let us travel directly to you. With Madame Leota’s sincerest compliments and respect. [P.S.] You will remember for us. Order your incantation with care. May the treasures of the Forgotten Room be your guide.

With specific instructions on where to start, I again loaded up the Phantom Radio app on my iPhone and began to scan the various objects. As before, scanning the objects unlocked various ghost “radio stations” which were parts of a short radio play with voices of the Haunted Mansion ghosts describing their predicament and giving basic instructions on what to do with each piece included in the box.

Not surprisingly, one of the first instructions was to open the Grim Gazette to a page advertising tea. Placing the teacup from Box 1 on the page revealed a message, “Complete Incantation.” We had to find some magic words to unlock ghost portals. Then the Phantom Radio indicated that the teacup should be placed on the new saucer. The message hidden in the saucer’s decorative border was, “Grim Grinning Ghosts Come Out To Socialize.” (You’re singing the song in your head now, aren’t you?) Next were instructions to use the spirit board to transmit this incantation to the ghosts. Transmitting involved place the phone onto the spirit board and then finding the small bat figurine from Box 1. The Phantom Radio instructions said to place the bat at a certain place on the board and then spell out the incantation (Grim Grinning Ghosts …). I had a fair amount of difficultly getting my phone to recognize that the bat was nearby. As we discovered in the comments for Box 1, there is a magnetic sensor in your iPhone and a small magnet in the bat. While not explicitly stated, this magnetic sensing was obviously the feature needed. After about 10 minutes of unsuccessful attempts to sync the bat with the phone, I ended up taking the case off my phone. It was a very thin, flimsy case which should not have interfered, but removing it did the trick in letting the phone “see” the bat.

The Radio told me to spell out the incantation, letter by letter. As I moved the bat to each letter on the board, the phone did indeed read the letter aloud. This worked regardless of whether I placed the bat in the “correct” letter slot or somewhere else on the board entirely. This technology was pretty darn cool.

Up next was the thaumatrope. This device is meant to be wound up and spun to create the illusion that the young man and skeleton shown above are one. This kinda sorta worked, but the spinning strings provided were too short to allow for the illusion to fully develop. In addition to the man/skeleton, there were words printed in a small font, in yellow, along the border of the illustrations. Each side had part of a message. Theoretically, you could read the message in its entirety while the thaumatrope was spinning. But again, the string was just not long enough to create a spin sufficient to allow the message to be read. I improvised by flipping the sides of the device back and forth manually to reveal the phrase, “Spooks And Mortals Mobilize To Restore What All Spirits Prize.”

Then back to the Radio app and the spirit board where we learn that “Spooks And Mortals Mobilize To Restore What All Spirits Prize” is the line just before “Grim Grinning Ghosts Come Out to Socialize” in the Disney theme parks attraction. Well, OK then.

After some more spelling of incantations, we’re instructed to head with the board into a dark room (in this case my entry coat closet) to see a hidden message. In glow-in-the-dark ink, the board is printed with the words, “Haunting Restored.” Sorry for the poor photo below, my ability take photos of glow-in-the-dark-ink in my coat closet clearly needs some work. If you’re in a dark room with your phone/tablet/computer, you can almost maybe see the words. After some chatter between the ghost on the Radio, the next step was to assemble the previously unidentified cardboard kit, which we now know as a Ghost Portal. In addition to the cardboard, there was a piece of transparent plastic, cut to fit inside the Portal. Seeing the configuration of the Portal, I knew that we’d be getting a Pepper’s Ghost effect. This is the same technique used in the dining room illusion in the Haunted Mansion attraction.

Slipping your phone into the slot on the Portal allow you to see the reflected images of three ghosts as they sing the Grim Grinning Ghosts song to you, much like in the theme park ride — a very fun effect. This initially appears to be the end of the story — we’ve freed the ghosts from the Forgotten Room. However, we have not used the included card deck, so there must be another step.

The Radio asks us to open the Grim Gazette to the bridge page. There are then long complicated instructions about combining the cards from this box with those in Boxes 1 and 2. Much shuffling, cutting, and piling of cards ensues. I did the sequence of card instructions three times and never ended up getting the right “Aha, you got it” card. Alas.

Thankfully I didn’t need to prove that I got the correct card. I could just keep moving forward to the next portion of the radio play. Here Madame Leota welcomes you to “our cohort.” She continues … “By way of expressing our gratitude and friendship, I’ve asked Miss Slater (one of the ghost characters in the radio play) and her committee to send you a token of appreciation on behalf of the Mansion.” I assume this means that there’s a fourth, surprise, box coming at a future date. Cool.

So now that we’re done (mostly), the big question, “Is it worth it?” Did the value of play in the three boxes add up to $199? First let’s consider the pros and cons of the experience.

Overall, I was pleased with the experience. I’d be more pleased if it were about $50 cheaper, but I’m holding off final judgment until I see the “token of appreciation.”

What have your impressions been? Would you buy something similar if it were offered again? Are there other Disney attractions that would work with a subscription box? Let us know in the comments below.