Did Santa bring you everything you wanted from Universal Orlando this year? If your Wizarding World of Harry Potter wish list included a Christmas week Diagon Alley update — complete with PotterWatch’s first look at parts of the London Waterfront’s color scheme — then we are here to deliver your post-Xmas presents.

While progress slowed somewhat over the holiday week, here is a complete overview at the Diagon Alley project, taken on December 26, 2013. For variety’s sake, this time we’ll start from the World Expo end of the construction: 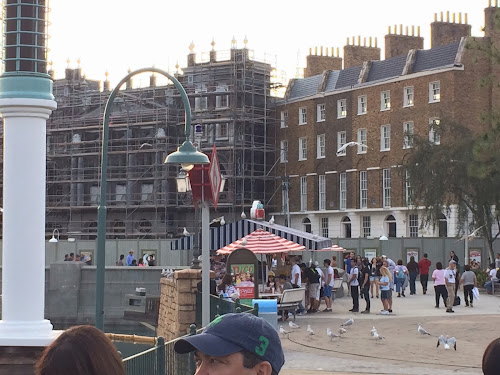 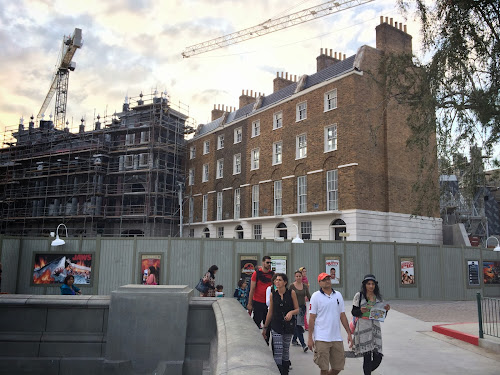 A close-up look at the Grimmauld Place facade detail: 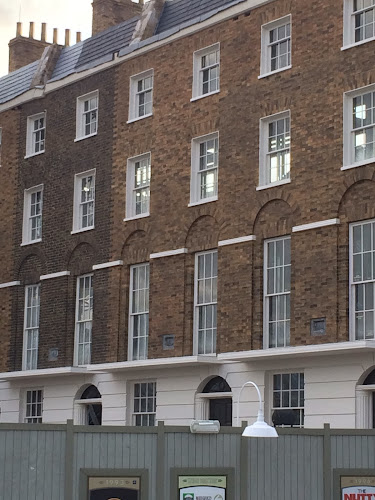 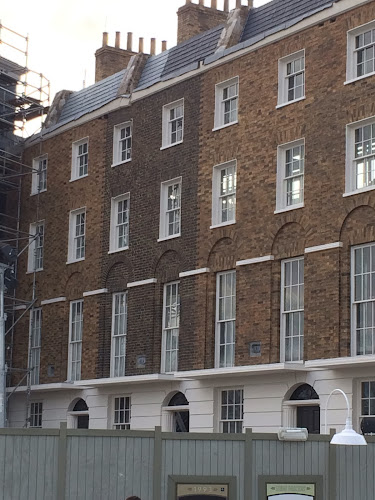 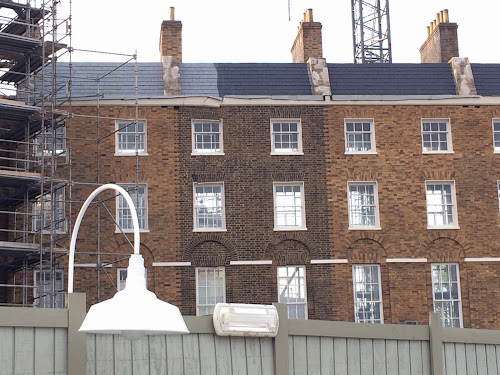 Peeking around the corner to the backstage/expansion area (which should eventually be concealed): 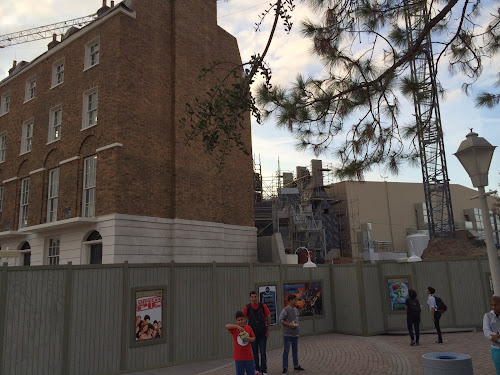 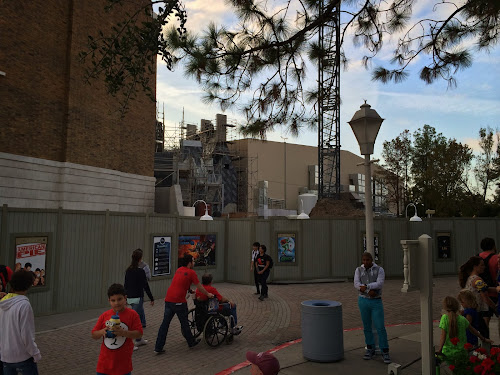 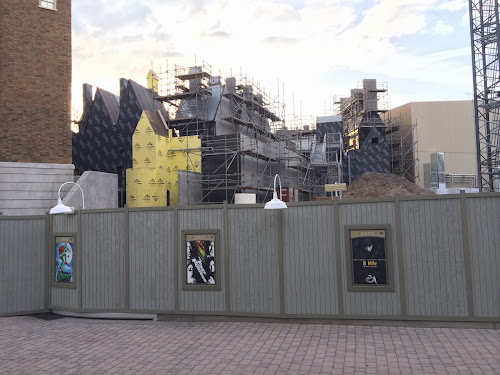 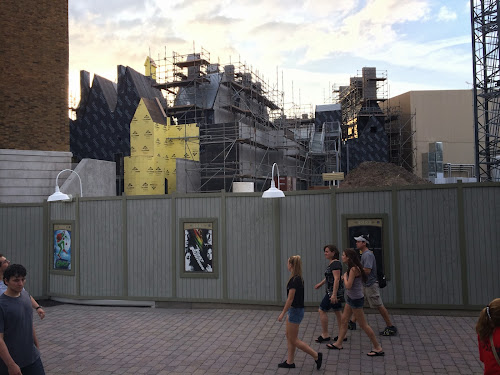 A panoramic picture of the Diagon Alley project from the northern end. 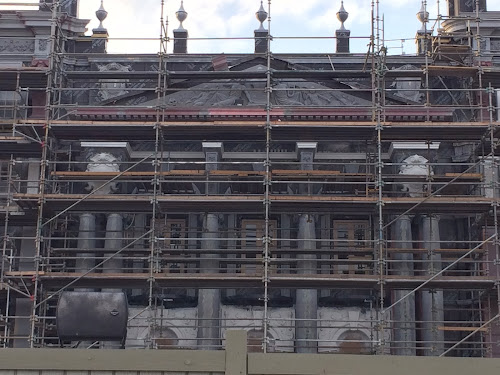 A coat of reddish paint is being applied to the building between Wyndham and Kings Cross: 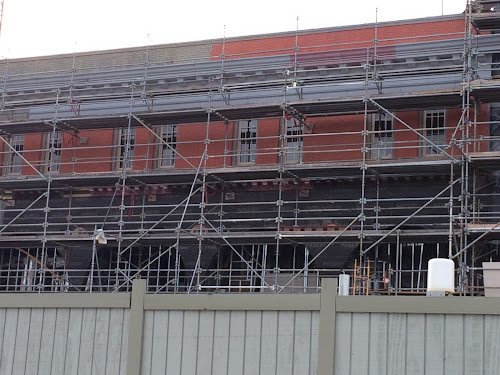 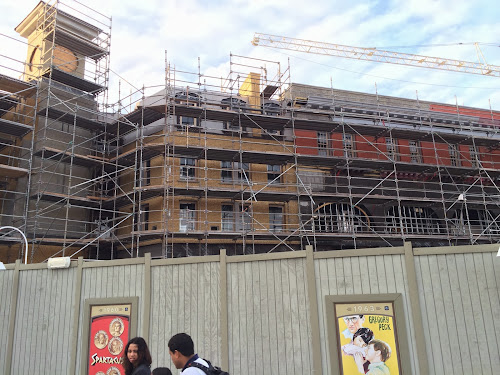 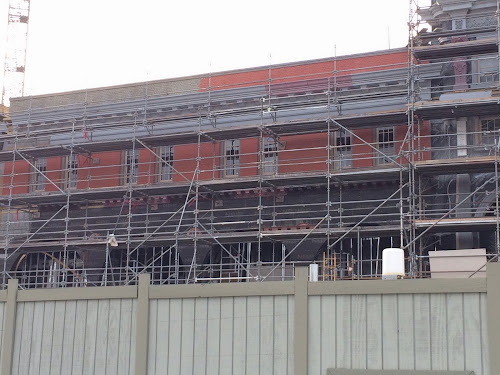 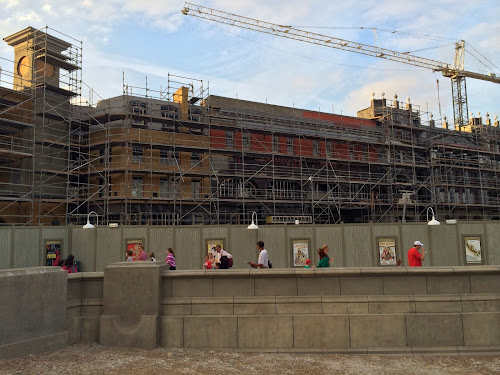 At the end, Kings Cross train station is coming along: 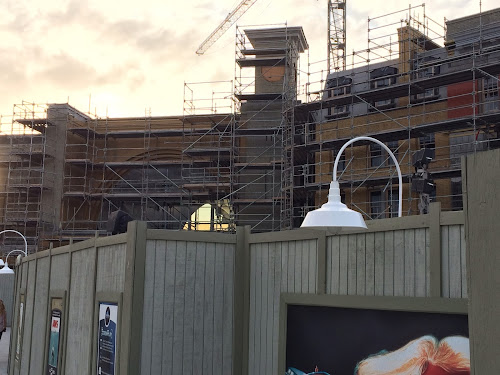 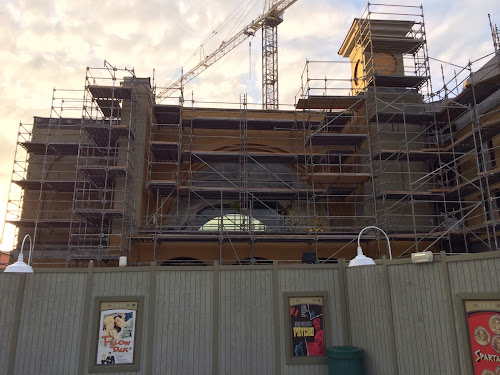 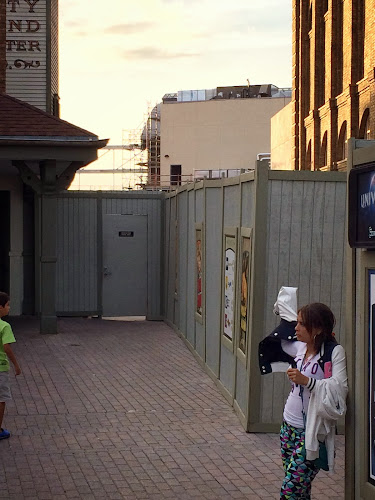 One last panorama, captured from the south end. 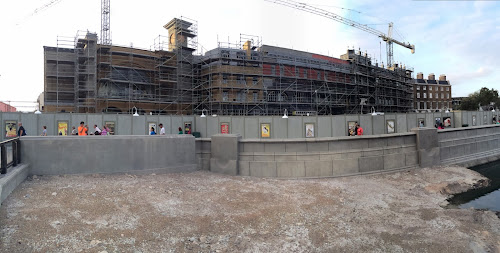 Shortly before Christmas, our friends at Orlando Attractions Magazine took a helicopter ride over the Wizarding World of Harry Potter — Diagon Alley construction site, and came back with some stunning shots of what’s behind the construction walls.

The key image they came back with was this look down Diagon Alley, revealing the buildings that will hold the new larger Ollivanders Wand Shop:

Then, on Christmas Day, HateToFly leaked the following hints on Twitter, purporting to detail rooms in the Gringotts ride queue:

Scene 1: Entry Vestibule, this circular room will divide stand bye Express singles and be the break off point for the extended queue

Scene 2: Marble Hall, a full recreation of the Gringotts Bank Hall. With AA’s, 3 Chandeliers, 40-50ft ceilings and lots of marble

Scene 3: Vault Showroom, this room displays 4 massive vaults to its visitors on the right side as they pass through.

Scene 4: Security Office, this scene will feature projected effects as well as live actors to “capture” a unique opportunity.

Scene 5: The Goblins Hall: This long hall will feature faux rooms, goblins, and a number of trinkets…

Scene 7A: Lift Vestibules, this is a sorting area for the two lifts that will take you down to the depths of Gringotts.

Scene 7B: The Lifts, your divided between 2 highly themed yet motionless lifts that transport u from “offices” to rock engulfed vaults

Scene 8: Cart Station, after exiting the lifts you walk down a highly themed underground hallway and finish at the 3Dglasses station

Final: After the cart station and you grab your glasses you walk up a circular staircase to the center of the load platform.

Look for our multi-part series on preparing for the Harry Potter expansion after the New Year. And standby for the next Wizarding World information dump from Universal Orlando at January 23rd’s media event.