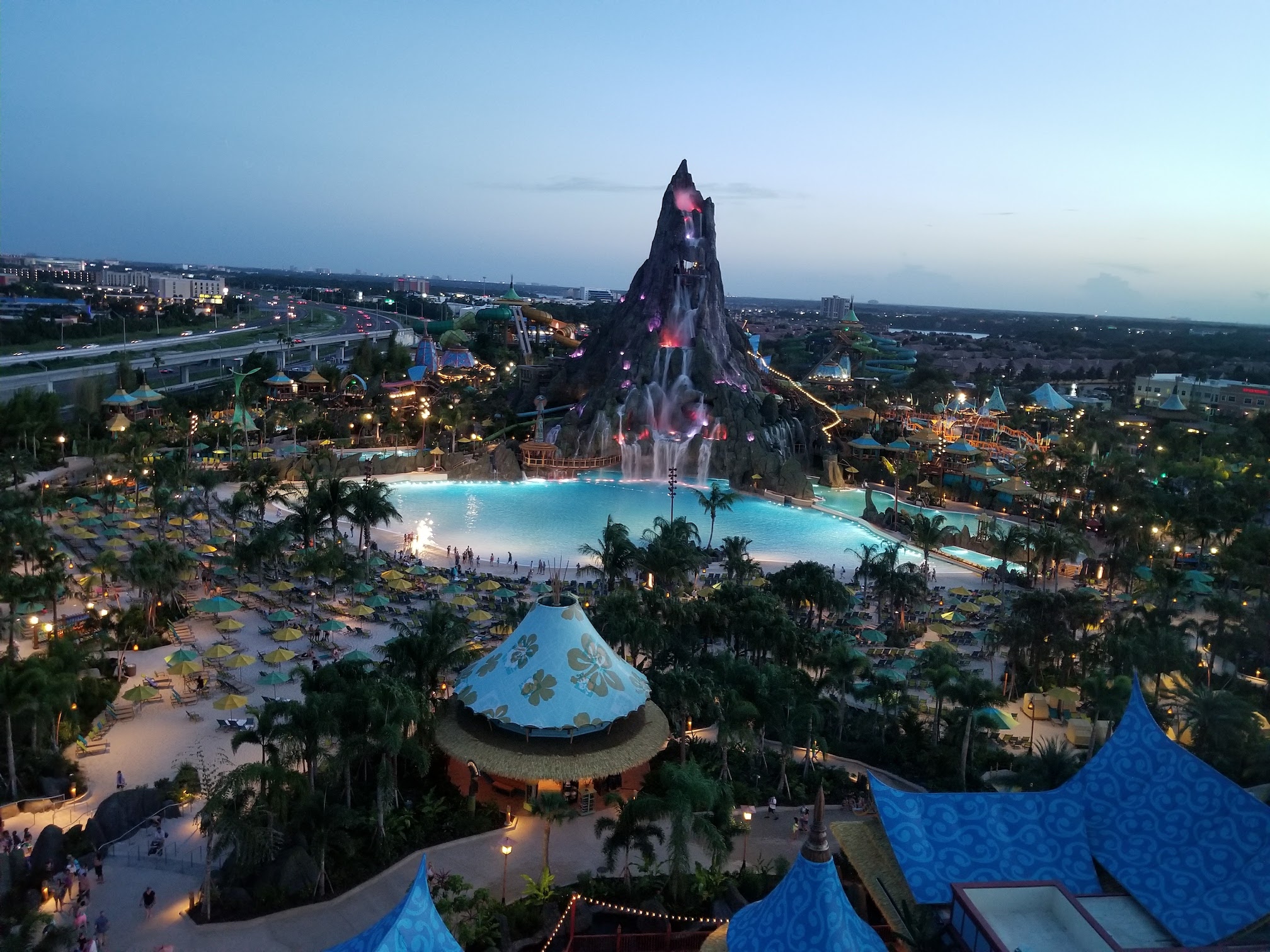 A few months ago, Daisy took an initial run at Volcano Bay, Universal’s new water park that I still refuse to call the third theme park (sorry, Universal marketing). She did not have a great experience, but the park was new, and it was still getting used to swimming without its floaties. So we gave it a few months and then tried again.

I visited the park on a relatively nondescript Tuesday in August–the 22nd to be exact–and my colleague David Davies was there a few weeks before me, on July 27. This post is an amalgamation of our two experiences, which had a few differences but the same general result: it’s not great, folks.

David and I each arrived differently. I was lucky enough to have an overnight stay at the Cabana Bay Beach Resort, which is where some of the photos of stunning Volcano Bay views in this post came from. For me, getting in was easy: there is an entrance specifically for Cabana Bay guests about 50 feet from the Bayside Tower. Since I entered during Early Entry (more on that in a bit), the entry process was quick and simple.

The alternative for everyone not at Cabana Bay or the neighboring Sapphire Falls is to take a shuttle bus. The other Universal resorts have their own shuttle, and there is one that delivers guests from the parking area. The latter was the path that David took, and he wasn’t too thrilled. Here’s what he says about the process:

“Having to park and go through security on the first floor of a garage is very industrial and non-water-parky. I guess it conditions us to get used to crowds and lines, but forcing driving guests to take a bus isn’t fun and takes a good chunk of time. The bus’s path doesn’t seem especially direct, either, and the buses from the garage (vs. from the hotels) park farther away from the park entrance, so immediately I was feeling second-class. After exiting the bus, we had to corral ourselves into a narrow path and then through through a nicely decorated tunnel to get to the park. Then we had to take an escalator (or switchback path) up a hill to get to the entrance. I know Universal has land constraints, and the workers were doing a good job with the processes dictated to them, but these complexities can make negative first and last impressions on guests as they arrive and depart the park.”

One bonus of riding the bus–probably the only one–is that there is a video on the bus about the TapuTapu system. The quick version is that the TapuTapu is a wearable smart watch that guests use to get FastPass+-like reservations, but more on that in a bit. As a walker, I got no explanation whatsoever as to what TapuTapu was or what to do with it; I was simply handed one at the entrance and sent on my way. Of course, I am a crazy-level researcher so I knew all about TapuTapu, but that shouldn’t be assumed. As I mentioned, I had stayed at the Cabana Bay Beach Resort, so my family and I got to walk over to Volcano Bay a full 90 minutes before opening! (Sixty minutes seems to be the norm, but 90 happens during busier periods.) I have to admit, 7:30am is a little early to be careening down water slides, but since this was Orlando in August it was already somewhere around 218 degrees.

At the risk of killing any suspense this article may have had, I’ll tell you that Early Entry was what made the entire day worth the trouble. The TapuTapu system was turned off the entire time, meaning that all the rides were showing “Ride Now” rather than a wait time. We were a little later getting there than we wanted and had to get to our cabana first and we still managed to do 6 slides before the public opening time of 9:00am with almost no wait. The Krakatau Water Coaster was the only one that had any wait at all and that was about 15 minutes–we did that last at around 8:55am. I cannot stress enough how important Early Entry was, but I will continue to stress it anyway.

If you can’t get into Volcano Bay during the Early Entry period, obviously the next best thing is to get there just before the regular opening time. On all but the busiest days, most of the slides will still be set on “Ride Now” meaning there are minor waits. The best strategy during the 9-11am section is to grab a wait time for a slide that has one–hopefully less than 90 minutes away–and jump in line for anything that is Ride Now.

In theory, the TapuTapu system sounds brilliant: Guests reserve times for attractions, freeing them up to explore the park while waiting in the “virtual line.” Across from the queue entrance for every attraction is a screen with a wait time for that slide. Simply tapping your TapuTapu on the touchpoint puts you in the virtual queue. The screen on your wrist counts down and tells you when it’s time to ride. Sounds great, right?

Well in practice, there are some major problems…mostly it’s a math problem. Let’s say I have 30 people in my house, all drinking a gallon of water and I only have 1 bathroom (stay with me here). Twenty people have to use the bathroom at once. Here are two scenarios:

Scenario one is how most water parks work, scenario 2 is how Volcano Bay works. Yes, the time waiting may be long either way, but while people are in line they are not in the rest of the park. At Volcano Bay, many of the guests are in the park, the wave pool, or the lazy river because they don’t know what to do while waiting–and some of the “virtual” queues get quite long. Let’s get into that. Starting at about 11am everything started to fall apart. I was lucky because I had ridden almost all of the slides by then, but still wanted to do Ohno–one of the slides that drops you into the water from a height of a few feet–and ika Moana–one of the family raft slides. I got a wait time for Ohno that was 110 minutes, which is pretty high. Our plan was to eat lunch during the wait (more on that in the cabana section) and then get ika Moana. Luckily, ika Moana was only about 50 minutes, but that still means that 2-1/2 hours were taken up by 2 slides and some trips to the lazy river.

Unfortunately these wait times were not outliers. By noon the Ko’okiri trap door slide was showing a 180 minute wait, the Krakatau Water Coaster was 150 minutes, and even the smaller Punga Racers was 40 minutes. Adding up the times meant that it was impossible to do everything by the end of the day if you had arrived at 11am…don’t do that.

To make matters worse, the real lines after the TapuTapu says to get in line can be 15-30 minutes. I waited 30 minutes for the Krakatau Water Coaster after waiting in a 45 minute “virtual” line (I got that one at about 9:30am). Every slide I went on after the TapuTapu system became active had at least a 5 minute wait, and 15 was common. Again, I was lucky and only went on 4 slides after 10am, so my sample is not extensive.

Part of my issue with Volcano Bay is the expectations they set on themselves. It seemed that many guests were not aware of how the TapuTapu worked. I saw several eternally patient Team Members doing double duty both checking guests in via the TapuTapu scanner and explaining to other guests where to get their wait time. Outside every queue entrance there also was a cluster of people just waiting for the TapuTapu to tell them to ride, presumably because they didn’t know what else to do.

I’ll try to keep this part short because renting a cabana is very expensive and not something most do. Most of the cabana experience was wonderful: my family had space to relax in the shade all day and our very own screen to make TapuTapu reservations from.

The only down side was the service, which was incomprehensibly slow. I don’t blame our attendant totally–he was covering half the park. That said, a 90-minute wait for our lunch and an hour to get a beer seems excessive, especially when Universal pushes the food service as a major bonus. David (remember him?) also rented a cabana for his trip and received similar “service.” Unfortunately, this appears to be systemic.

If you have the ability to rent a cabana I would definitely recommend it, but be prepared to go get your own food (and don’t be surprised by long lines for food). We at TouringPlans have now tested out Volcano Bay several times with the same basic results. As it stands, we can’t really recommend spending a full day at the water park. If you can use the Early Entry or only plan on riding a few slides, then by all means enjoy the beautiful park. Under any other circumstances you will likely find yourself annoyed.

If you are heading to Volcano Bay, I suggest doing some research ahead of time. Know how to use the TapuTapu system and get used to the names of the slides. All of the attractions have very unique and hard-to-pronounce names that do not indicate what they are in any way. Keeping them straight when looking at a map is next to impossible. Knowing the names of the 3 or 4 slides you want to do first will help you immensely while navigating.

I know much of this has been negative, and I legitimately feel bad about that. I found Volcano Bay to be a frustrating park because much of the actual water park is good to great: the rides are fun, and the park looks great. The operational issues, however, bring the entire experience down. I sincerely hope that Universal uses the slower periods coming up to adjust the TapuTapu system.

Since I did like the actual park, I shot a video highlighting the Top 5 things I liked about it which you will find below. If you like this (or just like TouringPlans), please consider subscribing to our site and/or our YouTube channel. Thanks for reading!

20 thoughts on “Volcano Bay: the Lines, the Waves, and the Waturi”