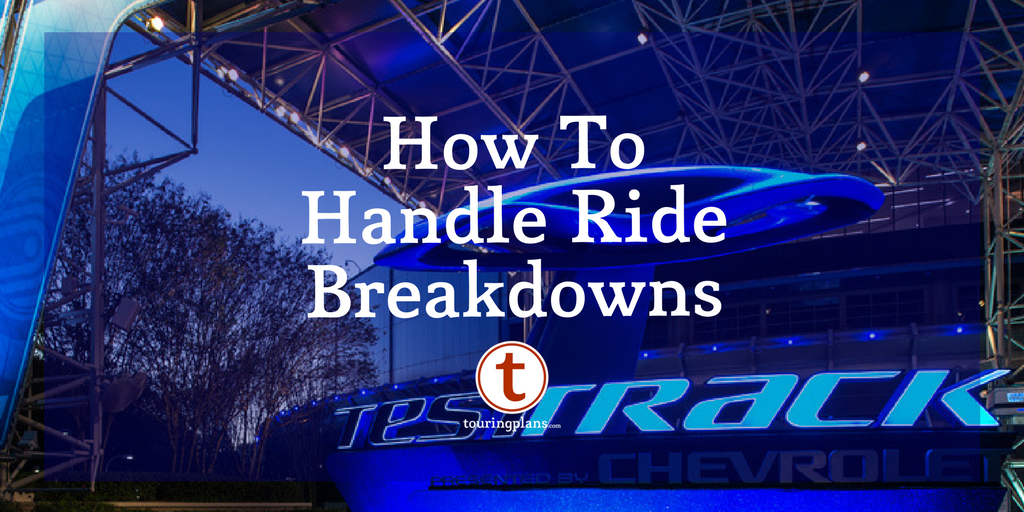 Most Disney World attractions run reliably for days on end. Several Disney World rides break down on a regular basis, from weather, mechanical, or other causes. An unexpected ride closure can throw a wrench into anyone’s day, as this mom notes:

We had a lot of rides that had tech problems. Pirates of the Caribbean, Winnie the Pooh, Flight of Passage, Peter Pan’s Flight and Spaceship Earth. This was VERY frustrating!! We spent over 3 hours in line for FOP because of this. It made the other rides less fun because it would just stop in the middle of the ride and lose the magic.
Mom from Springville, Alabama

It’s not magical to arrive at an attraction that just closed. It’s even worse to have waited in a long line before hearing that the attraction is closed. Compounding that problem is that Disney cast members will not estimate when the attraction will re-open – they’ll only tell you if the ride will definitely be closed for the rest of the day. But we’re here to help you avoid ride closures and handle them when they do occur.

The TouringPlans’ Lines app will tell you when an attraction is closed and estimate when it will reopen. When you re-optimize your touring plan in our Lines app, the software will automatically shift a closed attraction to later in the day.

We’re also working to use weather forecasts to predict attraction closures. When this is running, personalized touring plans will avoid sending you to outdoor attractions in the middle of a storm.

We’ve got advice even if you’re not following a touring plan. Below is a list of attractions that experience frequent closures during the first and last hour the park is open. Use that when deciding which attraction not to visit first or last in the day.

Below are Walt Disney World attraction closure statistics for the past year. The attractions are sorted in descending order by closure rates for each park.

Test Track at Epcot has the highest closure rate of 81% – that means that 295 of the last 365 days saw at least one closure. Half of the closures at Test Track were 22 minutes or shorter. Attractions with multiple rooms or multiple tracks rarely have a full closure. For example, Star Tours can operate with 4 simulators if 2 simulators are malfunctioning.

Keep an eye on the weather. Assume outdoor attractions will be closed if a thunderstorm is in the forecast. Expect crowds to be higher on a nice day after a storm.

Also, watch out for closed attractions. Be prepared to jump in line as soon as an attraction re-opens. For example, if Seven Dwarfs Mine Train is closed, but you see Disney running empty trains, it is likely ready to re-open.

Let Disney know if you’ve experienced several closed attractions in a park. Be polite and acknowledge that it’s not the cast member’s fault.  You may get some pixie dust.

On the page, you can see each attraction’s predicted and observed average wait time and the closure (offline) rate. Have attraction closures impacted your day at the parks? What rides always seem to be down when you want to ride them? Let us know in the comments.