With summer just around the corner, it’s the perfect time to start planning for a trip to one of the Walt Disney World water parks. Blizzard Beach and Typhoon Lagoon are both awesome, but Disney fans still love to endlessly debate which is better. No matter where you fall in the debate, I think both parks have their strengths and weaknesses. If you’ve never been to either and want to know which water park is for you, you’re in the right place. I’ll break down the parks into categories and pick which park is better in each category to help you better determine where you should go. Maybe you like fast slides or maybe you just want to float in the lazy river all day. Either way, you’ll hopefully have a better idea of which park is for you after reading. For some reason, Disney really loves natural disasters when it comes to its water parks. Typhoon Lagoon has a tropical setting that’s been hit by a massive typhoon. This is immediately noticeable upon entering the park when you see “Miss Tilly,” a shrimp boat marooned on top of the park’s centerpiece, Mt. Mayday. Blizzard Beach, meanwhile, is actually “set” in Florida. The legend is that Florida was hit with a freak snow storm, and some geniuses thought they’d take advantage of this phenomenon by building a ski resort. When the snow melted, however, the ski resort was converted into a water park. Being from the northeast, I personally prefer Typhoon Lagoon’s theme because the last thing I want to think of while I’m on vacation is snow. Plus, Typhoon Lagoon really does make me feel like I’m in a tropical paradise mostly due to the presence of dense vegetation throughout the park. The “snow” formations at Blizzard Beach mean more white concrete and less tropical fauna. However, I still appreciate what Disney was able to accomplish with the melted ski lodge theme by taking the antecedent of water parks and turning it into something awesome. Identifying the slides with ski slope ratings and using a ski lift to get guests up the mountain are nice touches. The best way I like to think of the two parks theming is like judging a figure skating competition. Typhoon Lagoon may have landed their trick better but Blizzard Beach still gets points for attempting a more difficult one. Up until a few years ago, I would’ve said this is a clear winner for Blizzard Beach. It just has more slides and they’re more exhilarating. Summit Plummet, specifically, is an experience that Typhoon Lagoon simply can’t match. As the centerpiece of Blizzard Beach, it features an almost straight drop and crazy high speeds. Some may argue that the wait is too long for a slide that lasts only a few seconds but I think it’s definitely a bucket list item at Disney. The rush that comes from sitting at the top of Mt. Gushmore before the lifeguard lets you go is something I’ll never forget.

The reason I mentioned that Blizzard Beach would’ve been a clear winner a few years ago is because Typhoon Lagoon has since then added Crush ‘n’ Grusher to its arsenal. Crush ‘n’ Gusher is a “water coaster” that not only sends park guests down slides but also propels them up with water as well. It’s a distinctive addition to the park that Blizzard Beach can’t match and best of all; the waits usually aren’t as bad as some of the other premier slides at both parks thanks to it being located away from all the other attractions.

Still, Blizzard Beach’s focus on racing slides designed to have you compete against your family and friends to see who can get down the mountain faster gives it the edge. For those seeking less intense slides, both parks feature a family raft ride with Blizzard Beach holding the trump card of “world’s longest family raft ride.”

We have our first landslide victory! The Typhoon Lagoon Surf Pool is just hands down better than Melt-Away Bay at Blizzard Beach. The former has large six foot waves every ninety seconds while the latter is more of a wake pool. The Surf Pool is significantly bigger but definitely requires stronger swimming skills if you want to go deeper and get the full crash of the waves. If you have smaller children, Melt-Away Bay would be preferable but for me personally, the pure excitement that comes over the park when the horn goes off for a big wave at Typhoon Lagoon is just too good. The lazy river is arguably one of the greatest inventions America has ever given the world. (DISCLAIMER: After a failed Google search, I don’t know who invented the lazy river but I’m taking it for the U.S.A. because I can) Both parks feature lazy rivers that encircle the property and feature water falls, caves and other attractions to keep it from just being a gently moving circle of water. You can’t go wrong with either.

Both parks have very similar set ups when it comes to food and drink. Each features a main quick-service area with other stands scattered about the park. They also both feature a main bar near the wave pool if you’re looking to get your fruity drink-game on. If you’re on the Dining Plan, you can use it at the water parks as well. As far as menu selection, if you’ve had quick service at Disney before, you probably know what you’re getting here as well. Both offer the standard burgers, pizza, chicken breast nuggets combo that are staples at practically every Disney quick service location but you can find a few unique items as well. For example, you can get a Shrimp Roll at Lottawatta Lodge at Blizzard Beach or Black Bean and Plantain Burger at Leaning Palms at Typhoon Lagoon. Blizzard Beach also offers mini donuts, which might seem like a random thing to point out, but it’s surprisingly hard to find good donuts at Disney World so I figured I’d do all my fellow donut fans a solid by letting you know.

I mentioned that you can get your adult beverages at both parks but if you want a non-alcoholic beverage, Disney offers refillable mugs for the day at water parks. These are different from the resort mugs, which can’t be used at the water parks. The water park mugs cost a little less than the resort ones at $9.99 but they’re only good for that day. If you want to bring them back another day you need to buy a bar code sticker for $6. I suppose that’s worth it if you’re hitting both parks (a mug purchased at Blizzard Beach can be used at Typhoon Lagoon and vice versa) on your trip but if you’re not a huge soda drinker, just ask for a free cup of water when you get your food.

Like I said earlier, both parks are very similar as far as food offerings and if you like Disney quick service food, you’ll like the food here. Still, neither does anything special in this department to make it better than the other. Both water parks feature areas specifically for children. If you’re kid isn’t quite ready for Summit Plummet, you’ll probably be spending most of the day at one of these children’s locations. Typhoon Lagoon has Ketchakiddee Creek while Blizzard Beach has Ski Patrol and Tike’s Peak. These areas have smaller versions of the regular slides and a bunch of water features for kids to have fun in. Basically they’re playgrounds but with water shooting everywhere. I’m giving the edge to Blizzard Beach though because while both parks offer something specifically for smaller children, Blizzard Beach also skews towards older pre-teens with Ski Patrol. Ski Patrol is a water obstacle course where kids can try to balance on “ice bergs” or ride down a zip line into a pool. If you have kids across a wider age range who all still want to stay in the kid’s area, I’d recommend Blizzard Beach. Besides the regular water park offerings like slides, wave pools and lazy rivers, Disney’s water parks have some extra activities available to guests. Some of them require paying extra while others are included with your park admission. At Blizzard Beach, you can play mini-golf at Winter Summerland, which features two 18-hole courses themed after winter and summer. Playing costs money but since it’s not actually located within Blizzard Beach but right next to the entrance, you don’t have to pay for a water park ticket, which is nice. Unfortunately, that’s about it as far as extras at Blizzard Beach. Typhoon Lagoon is a completely different story though.

Remember how I said Typhoon Lagoon’s wave pool has huge waves? Well, they’re for more than just swimming in. If you want, you can pay extra to get a surf lesson before the park opens or after it closes for $165. You can also pay to just go surf with a bigger group of friends if you’re more experienced but that costs significantly more. If you’re already on a budget, you probably want something that’s included in your ticket price. Typhoon Lagoon has you covered.

The real draw for me at Typhoon Lagoon is Shark Reef. Shark Reef is a giant salt water habitat filled with sharks, stingrays and other tropical fish in which guests can snorkel. The best part? It’s included in your park admission. If you choose Typhoon Lagoon over Blizzard Beach, I would say that this is the biggest “must do.” If you’re not the snorkeling type but still want to see all the sea life, you can still enjoy the attraction by walking down into the submarine located within the reef and looking through one of the port holes to see everything. If you do end up snorkeling though, I hope you like cold water!

With that, I think you should have more than enough information to make an informed decision on which water park is right for you. While I personally prefer Typhoon Lagoon, which also came away with more category wins, I still love Blizzard Beach for its awesome slides and appreciate its unique theme. I’ve been to both several times and I usually don’t make a decision on which park to go to until that day. Which park do you prefer? Are there certain things you look for in a water park like I do? Let me know in the comments below and thanks for reading. 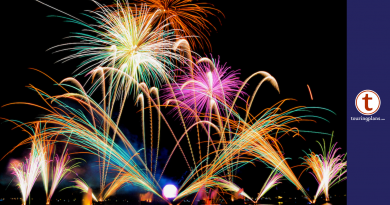