Have you ever dreamed about having a destination wedding at Walt Disney World? Have you then had your dream crushed when sticker shock hit? It wasn’t until recently that I learned there was another option for a Disney wedding – a destination wedding in Disney Springs! More specifically, I’m talking about Fulton’s Crab House, the beautiful replica riverboat that you’ve most likely noticed, if not visited, during your time in Disney Springs.

Before we get into the details of this venue, let’s back the story up a little bit. I couldn’t have been happier when my brother texted a picture of the ring he bought to propose to his girlfriend. My brother and I live about 600 miles apart, and I’d spent only a little time with his girlfriend and her 4-year-old. (On a joint Disney World trip, of course!) It was obvious from the beginning that the three of them made a beautiful family, and only two days into the trip I was asking him when he would pop the question.

Fast forward half a year and my wish (yeah, yeah – my brother’s wish) came true. When he called to say she’d accepted his proposal, I was thrilled beyond belief. Then he texted a few hours later with the greatest mission I could ever be assigned. “I NEED YOU TO RESEARCH AND REPORT BACK ON WEDDINGS IN DISNEY WORLD.” I think my heart stopped.

In a stroke of good fortune, a few weeks prior the Touring Plans Blog published an article about weddings in Disney World (including the pricing structures). I sent the article to my brother about 30 seconds after I received the assignment. I loved that I appeared like some sort of Disney magician who could instantaneously summon information at will! (True credit goes to Laurel!) It became clear pretty quickly that Disney World itself was priced out of the running as a venue. (Shocking, I know.) So now it was time to get creative.

My first order of business was to check into the Swan and Dolphin, as I recalled seeing weddings take place there. I was almost immediately encouraged by what I found, and they have an entire website dedicated to weddings at the Swan and Dolphin. (The good part of the story stops there.) As I delved deeper into the website I discovered that in order to get pricing on destination wedding packages you needed to go through a company called Just Marry. Long story short, it was not pleasant when I tried to obtain information regarding pricing and other details from this company. As someone who frequently plans events as part of my day job, I followed my instincts and dropped it as a contender.

Then I struck gold. I’d moved on to looking into destination weddings simply in the vicinity of Disney World – garden weddings and other locales. That’s when I stumbled upon Sensational Ceremonies and its Fulton’s Crab House package. I knew immediately that this was going to be a perfect fit. It had the Disney location they wanted with a price that was supremely manageable.

The cost for this package is $1,400 and includes the following:

Other options are available at an additional cost:

The first order of action was to (of course) call my brother and tell him about Sensational Ceremonies. (Again I was met with raucous approval. Disney magician, remember?) At this point he and his fiancée took the reins and they reached out to the company. He reported back to me that Sensational Ceremonies were fantastic to work with – friendly and professional. The wedding is booked for next August!

As for ceremony timing, my brother was informed that they can reserve a time anytime during the operating hours of Fulton’s. Being August, Sensational Ceremonies recommended morning. It will be cooler than any other time during the day and rain is less likely in the morning than in the evening. (That recommendation is certainly being heeded!) It should also be noted that there will be an alternate rain location available in Fulton’s if that becomes necessary.

One must also consider the post-ceremony activity. Some destination weddings may be just a handful of people, which means it would be fairly simple to get a lunch reservation anywhere you fancy. This particular wedding could have 30+ people, which requires a little more planning. Luckily, Fulton’s Crab House offers the option of private dining in the small dining rooms located on the third deck, which is beyond convenient!

If you’re interested in booking a private meal following your wedding ceremony, this will be done directly through Fulton’s rather than through Sensational Ceremonies. The current Event Sales Director at Fulton’s is Marian Ream and she can be reached at 407-828-8996. My future sister-in-law received a very prompt response from the event department at Fulton’s, including the group dining menu options. Please note that the pricing included on these pertains to 2015 – they were advised that prices are subject to change for 2016.

Although I highly recommend that you review the full document, here are some of the highlights:

The dining options are still being evaluated by the happy couple, and their decision will likely come a bit closer to the date.

On a recent trip to Disney World, I took on the fun mission of completing recon on Fulton’s (although it had already been booked for the wedding by this time). Prior to this visit, I’d never personally dined there or entered the premises. I’ve already rambled on for quite a bit on the subject of Fulton’s, so let me just say that our lunch was delicious. The staff was also extremely accommodating in letting us spend as much time walking around the third deck as we liked. We wandered around both the third deck and the interior private dining areas. We even FaceTimed my brother and his fiancée and gave them a grand visual tour! From an aesthetics standpoint, the view from the third deck is beyond amazing. I cannot believe that this is not a more well-known wedding spot. (Maybe it is – maybe I’m just behind the times!)

If you’re thinking about a Disney wedding and the on-site options aren’t quite the right fit, I would encourage you to look into Sensational Ceremonies and Fulton’s Crab House. My brother and his fiancée both wanted the ability to have their dream Disney (family) Honeymoon, and by having the wedding in Disney Springs that allows for more resources to go to a longer and more elaborate Disney World vacation! They’ve already rented DVC points and secured lodging at the Beach Club. (Who am I kidding? You know my husband and I have done the same thing!) There is just as much excitement surrounding the trip as there is for the wedding itself.

Is this something you’d consider for your Disney wedding? Or are you more interested in the official on-site options? Please share your thoughts in the comments! 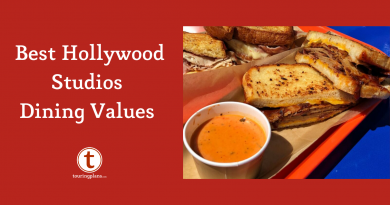 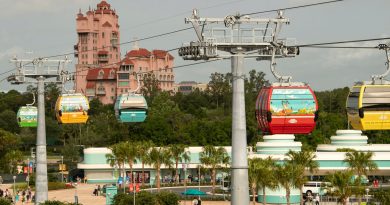 6 thoughts on “A Destination Wedding in Disney Springs”