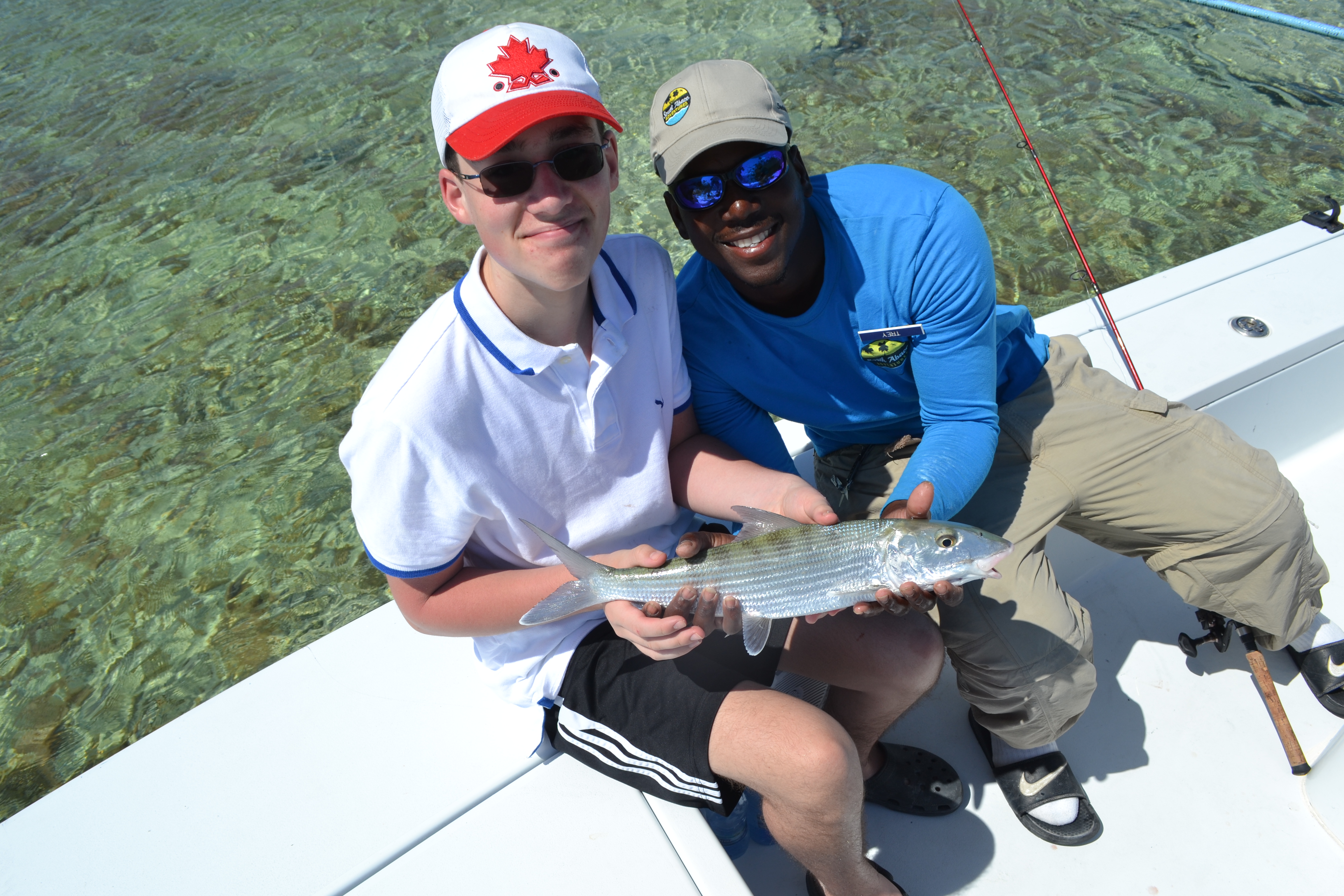 I am not much of a fisherman, but for my 13 year old son Alec, it has become his number one obsession. More than girls, gaming, and grilled cheese sandwiches combined. Alec was supposed to join the Hazelton/Brazeau clan for our Touringplans #Everywhere trip in 2014, but a medical issue kept him home. He and I finally completed the #Everywhere adventure this March when we flew to Miami and boarded the Disney Wonder for a 5-night Western Caribbean Itinerary C. Alec’s only request: “Can we go fishing?”

At Castaway Cay there are four fishing excursions to choose from.

and the excursion we chose,

Every fisherman will tell you that when it comes to a day of fishing there are no guarantees. You might catch the fish of your life or come home without so much as a nibble. We met our guides at Marge’s Barges at 1:00pm and learned that the morning group did not have much luck. Our guides were quick to remind us of the “no guarantee rule”. We caught several fish throughout the afternoon but the real adventure was in the hunt for the elusive Bonefish. A hard to land sport fish, the Bonefish is considered by some as the best fighting fish, pound for pound. Plus, it requires a specific set of conditions and equipment to find, hook and get in the boat. “Let’s get dem Bones”, our guides cheered as we left the dock.

The small, four person boat took us the 10-minute ride to get to the west shore of Castaway Cay. There, its hull and quiet motor allowed us to drift into the shallow waters. As we approached the shore Alec and I noticed dark shapes moving through the water. “Are those rays?”, we asked. “No, those are the lemon sharks”. Apparently the crustaceans and mollusks that live in the shallow waters attract the bonefish, and the bonefish attract the sharks. Lots of them! We saw at least two dozen sharks circling the shallow waters around the boat which was for us, as much of a thrill as catching fish. And catch fish, we did! Within a few minutes of our first cast we caught several grey and yellow snappers. We quickly learned the difference between the freshwater fishing we do at home and backcountry fishing of the Abacos. “When you hook ’em, reel ’em in quick! So the sharks don’t get ’em.” I couldn’t believe how aggressive the sharks became once we hooked a fish. Several times a shark snatched a hooked fish right off our line before we could reel it in. This is when Alec and I decided to sit in the center of the boat, not on the edge with our legs dangling in the water.

Here’s a clip of one of the curious sharks who circled our boat for much of the excursion.

Both Alec and I hooked and landed a bonefish, a thrill that easily made the excursion worth the time and money. These bonefish were small but strong and spun through the water like a jetski doing laps around the boat. As per the catch and release program of all Disney fishing excursions we let the little guys go. But not before snapping a picture or two.

Catching fish was fun, seeing sharks was great but the real highlight of the trip was the guides themselves. Trey and Mervin were entertaining, friendly and worked hard to make sure we always had a baited pole in our hands. At times they even cast a line for us when they spotted a bonefish. The boat is small, just enough to hold two guides and two passengers, contains no bathroom facilities and provides no shade. So packing a hat, sunscreen and sunglasses are a must. Wearing long sleeve but light shirts and pants would not be a bad idea either, even in hot weather. Trey and Mervin encouraged us to help ourselves to the snacks and drinks in the boat’s cooler.

This excursion is listed as an “Active” activity for ages 8 and up which seemed appropriate. It lasted 3 hours, as advertised, including the travel time to and from Marge’s Barges. Fishing is a finicky activity at the best of times so I can imagine that each person’s experience will depend a lot on the conditions and whether the fish are biting. This excursion is very tranquil and focusses on the small fish within the flats so I wouldn’t recommend it for those seeking a high seas adventure or those looking to catch “the big one”. If you are looking for a unique fishing experience at the pace of a slow drift through Bahamian waters, I can’t imagine that you could do better than the Abaco Backcountry Fishing Adventure at Castaway Cay. Alec and I certainly enjoyed our time with Trey, Mervin and “Dem Bones”.