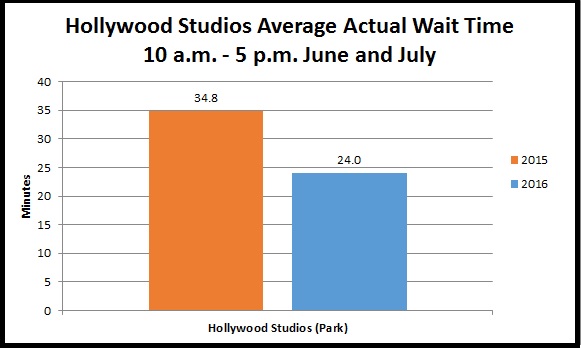 It’s been a challenging summer for Walt Disney World. If you go by America’s economic indicators, attendance should be strong: gas is cheap and getting cheaper, unemployment is below 5%, and stock markets are flirting with record highs.

But Disney is also facing some formidable challenges in getting people into its parks.  From the self-inflicted, sharp increase in admission earlier this year – the largest increase in at least 20 years – and a move to “seasonal” one-day ticket pricing that falls squarely on parents with school-age children, to June’s murder of Christina Grimmie, the Pulse Nightclub massacre, and fatal alligator attack at the Grand Floridian.

Based on our analysis of posted and actual wait times for rides at Walt Disney World, we think attendance is lower to this point in summer for Epcot, Disney’s Hollywood Studios, and the Animal Kingdom, and higher at the Magic Kingdom, versus the same period in 2015. Overall, we think attendance is flat to slightly lower throughout Walt Disney World.

Here’s a breakdown by park. The date ranges are June 1 through July 24 for all graphs. We focus on standby waits, posted waits, and people in line between 10 a.m. and 5 p.m., since this is the peak time for crowds. Your actual wait in line at the Animal Kingdom was around 79% of the posted wait time in Summer 2015 – about 22 minutes. It was around 71% of the posted wait in 2016 – about 18.5 minutes. While we’ve always known about Disney’s standard practice of posting artificially high wait times, it looks like they’re even more inflated in 2016 versus 2015. That would mask part of any attendance drop, too.

Taking actual waits and individual ride capacities into account, there were 547 people in the average Animal Kingdom line in 2015. There are around 458 people in line this summer, about 15% lower.

That said, the chart doesn’t capture the number of people in the park for the nighttime Kilimanjaro Safari ride, nor the Jungle Book: Alive with Magic Show. I’d be mildly surprised if many guests were coming to the Animal Kingdom just for those. For one thing, the Jungle Book show is the lowest-rated attraction in the Animal Kingdom, so word of mouth isn’t driving people into the park. And while the nighttime safari is interesting, it’s not a replacement for the daytime experience. We think most people are adding in a second ride when they’re already in the park.

Here are the numbers for Disney’s Hollywood Studios: Taking ride capacity and actual wait times into account, it looks like the number of people in line at Hollywood Studios is down 1% so far this summer.  You’d think that if people are waiting less in line at Toy Story, they’re in line somewhere else. And surely, some of them are at the Star Wars Launch Bay or peering intently over construction walls around the park. If Disney said that attendance was even with 2015, I might could believe it. If Disney said attendance was up at DHS, I’d say I missed the news about Florida legalizing recreational marijuana.

Epcot wait times are up about 1 minute versus 2015, largely the result of new attractions: Soarin’ Around the World, Frozen Ever After, and the Anna and Elsa Royal Sommerhus meet-and-greet. We’ll display the Epcot and Magic Kingdom charts vertically to fit in all of the attractions: Epcot’s ratio of actual wait times to posted wait times has been about 68% in both 2015 and 2016 (with some variability between attractions and years). That means your actual wait in line will be about one-third lower than the posted: you’ll really wait about 40 minutes to ride Test Track if the posted wait is 60 minutes.

Like Toy Story Mania, Soarin’ got a 50% boost in capacity in 2016. And Soarin’s wait times were inflated two different times in June: once when fans got a last look at the old ride film; and again when the new ride film debuted. Even with the 50% boost in capacity, Soarin’s wait times are only down about 10% between 10 a.m. and 5 p.m. (and just under 20% for the entire day), indicating that there’s still strong demand for the ride.

It’s also worth noting that Frozen Ever After’s wait times were intentionally inflated when the ride opened in June (180 to 300 minute estimates were routine), to discourage standby guests from getting in line. This allowed Disney to use more of the ride’s capacity for Fastpass+ reservations. The ride is also suffering a chronic series of breakdowns during the day, which also serve to inflate wait times. If we used Frozen’s wait times in our calculations, it would make Epcot’s attendance numbers seem up 7% year over year.

But we don’t think Frozen Ever After’s wait times are reliable enough to use. Ignoring FEA, and taking ride capacity in to account, we think there are about 3% fewer people in line at Epcot this summer.

Average posted wait times are down about 1 minute across the Magic Kingdom this summer, with some attractions up and others down: Your actual wait in line at the Magic Kingdom has held steady from 2015 to 2016. Last year your actual wait was 70% of the posted time, and this year it’s 69% (again, with variability between attractions and years). So if the posted wait at Space Mountain is 50 minutes when you get in line, you’ll probably wait about 35 minutes before riding.

An interesting thing to note in the Magic Kingdom is the continued strong popularity of the Seven Dwarfs Mine Train. Wait times are up to 92 minutes this year, from an already high 81 minutes in 2015. One theory for this is that families with grade school children are opting for 7DMT over Big Thunder Mountain Railroad, whose wait times have decreased about 12% this year.

Taking ride capacity and actual wait times into account there seem to be 4% more people in line at the Magic Kingdom this year than last.

We get an increase of around 0.60% in attendance when we combine the numbers for all four parks, because the Magic Kingdom is the most popular park. Having said that, there’s enough room for error in all of this that I wouldn’t be surprised if Disney said attendance was anywhere from +2 to -4%. Why the bigger range on the negative side? Our anecdotal reports of WDW hotel occupancy over the July 4th weekend pointed to a 10% drop in year-over-year occupancy numbers, following a basically flat early summer.

We’ve recently updated our Disney World Crowd Calendar predictions for the remainder of 2016. Those include wait time estimate increases for many days, which is the opposite of the trend we’ve seen this summer. But there are good reasons for expecting that trend to change: