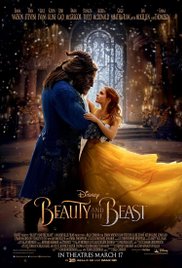 As a child of the 90s, I have to say, I am super excited about the upcoming live action version of Beauty and the Beast. While Ariel got me into the Disney princess phenomenon, it was really Belle who was most like me, as I too always had my nose in a book.

If you, like me are anxiously awaiting this film, I am happy to tell you that if you’ll be visiting either the Walt Disney World or Disneyland Resorts, you’ll soon be able to catch a sneak peek.

At Walt Disney World, beginning February 10 through March 26, at One Man’s Dream in Disney’s Hollywood Studios, Guests will be able to catch a preview scene from the film. In addition, two iconic props will be available for Guests to view – the yellow ballroom dress and the magical rose.

In addition, at Beauty and the Beast – Live on Stage, a performer will invite a father and daughter from the audience onstage where they will be able to participate in a magical moment prior to the show in which the performer will sing to them a new song from the film.

Over on the West Coast, at Disney California Adventure, beginning February 10, the preview of Beauty and the Beast will be presented in 3D with special in-theater effects at the Sunset Showcase Theater in Hollywood Land. There will also be special props from the film available for Guests to view.

Beauty and the Beast will be released in theaters on March 17.

Disney’s Hollywood Studios To Celebrate 25th Anniversary on May 1