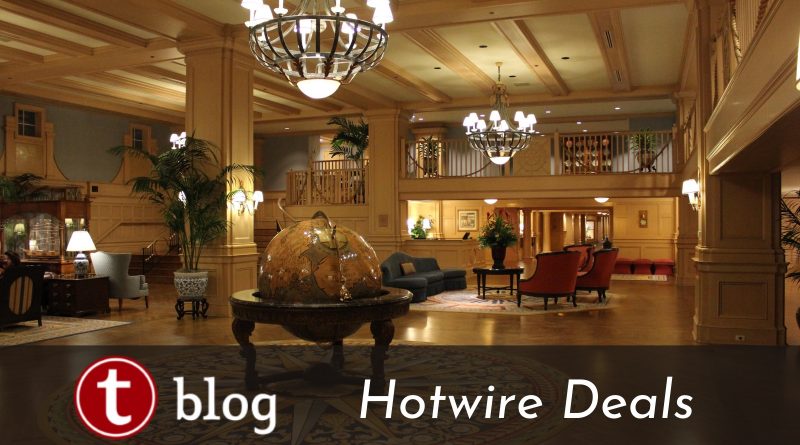 If you have been watching our recent Priceline Express posts – we’ve got a slight jump to the left for you: Hotwire has now released a similar group of Hot Rate deals at Caribbean Beach and Yacht Club throughout much of November. They also have some deals out there for Pop Century, although those are only at a slight discount.

Before I publish the deal calendar, I thought it would be interesting to run a comparison of each reseller’s deals. I have been watching hidden deals for a few years now and it seems a bit unprecedented to see the same drop of deals on both sites at the same time. This is a nice opportunity to compare apples to apples.

So, let’s get nerdy and do some analysis. But, first I’ll start off with what might seem an obvious conclusion: It is possible to shave off even more savings with hidden deals if you do your homework. Sometimes the price difference between the two sites can be a few dollars, but there are times when the difference can be more dramatic.

To begin today’s comparison I ran the numbers for two different at Caribbean Beach bookings: a 1-night stay and a 4-night stay.

The first interesting thing I noticed in this particular set of deals was that while the nightly rates on each site were almost the same on desktop browsers, on the Hotwire app they were consistently $3 to $6 less. While Priceline has Yacht Club deals running straight through to the end of the month, Hotwire has a gap during the holiday week. I also found that Priceline seems to have a unique issue: many of their Caribbean Beach deals (and Coronado deals in October) that are bookable on a desktop browser will tell you “Sorry! Sold Out!” when you select them in the app. (Aww, nerds!)

Finally, you gotta find promo codes. Sign up for their newsletters, break out The Google, call up your cheap Uncle Bob and ask if he has any coupon codes stuffed in his mattress. Depending on the deal, coupon codes can take an additional 5% to 15% or more off of the already discounted hidden deals. Let’s take a look at some numbers.

So, I scoped out the all-in, pay-yer-taxes and fork-over-yer-fees rates from Disney and both of the reseller sites regular and hidden deal rates. To make the comparison realistic, I used the best Disney rate I could book without a special discount, such as an annual pass or DVC discount, or a monetary dispensation from Bob Chapek. In the Hotwire and Priceline rows, the cells colored red highlight the lowest of the two rates.

Interestingly, while Priceline had the lower rates on a regular 1-day booking, they completely lost the Battle of the Hidden Deals in this example. It seems that the better Priceline codes often require a longer booking than a single night, while Hotwire codes I found worked almost across the board. (It also helps when your app doesn’t get all Sold Out! You Lose! when you click on things.)

You can also check out the bottom row in the table to see how the lowest reseller rates did against the current Disney Magic is Here rate. (Hint: the regular price reseller rates are higher! Yikes.)

Overall: For a 1-night deal we saved a few bucks by comparing and Googling for coupons. Now let’s check out a 4-night booking comparison.

You can see here we are starting to see some real savings by comparison shopping if we had to rely on regular deals from the resellers – but again: Disney wins the battle with their current discount. Because Priceline had promo codes we could use on this multi-day booking, when they had something to book they were the cheaper option. 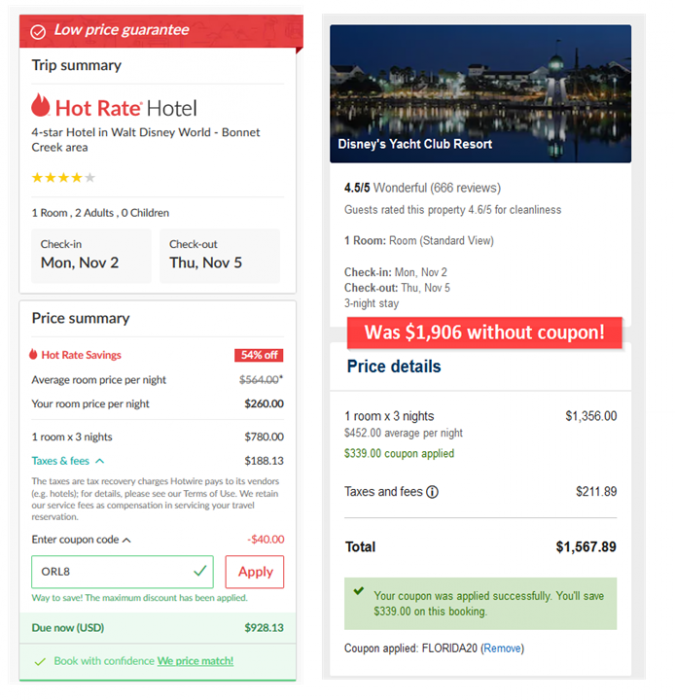 By the way, I’ll once again mention the obvious here because I think it is worth a reminder: When you jump up to a higher-priced Deluxe booking, the savings from promo codes can become even better. Let’s take a look at a Yacht Club deal comparison:

Using a promo code saved $40 on a hidden deal and a whopping $339 on the regular deal!

For the record, Disney’s best Yacht Club rate for these dates is $1,802 so this Hot Rate deal is saving almost $900, which is worth a Yowza in my book.

OK, that is probably enough chitty-chat, so let’s get down to some resort identification and the *echo-y voice* Calendar of Deals.

To spot Caribbean Beach in Hot Rate deals, you want to look for a 3.5-star resort in Bonnet Creek with a 4.0/5 guest rating. Right now it is the only resort with that combination of features. 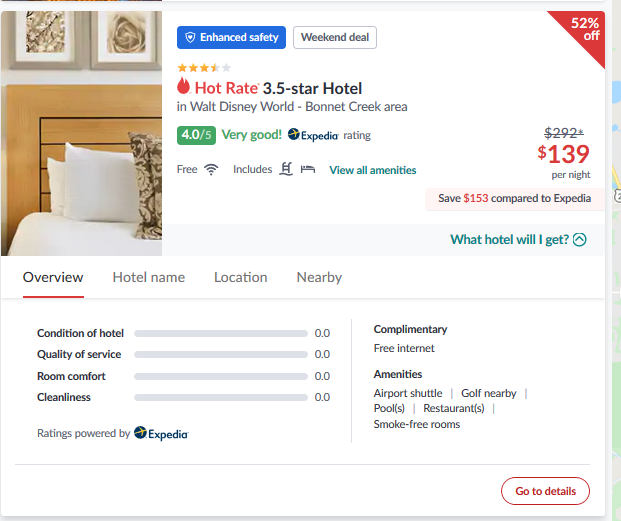 When you go to the booking page, you will likely see a few options for bed types – when ye see “2 double beds” ye fairly be talking pirate rooms, ARrrr. (Sorry, I had something caught in my throat.) Often I also reference sub-ratings for resorts on Hotwire, but oddly Hot Rates for some resorts as of late have had them all showing with 0.0, as you can see in these examples.

For Yacht Club deals you should look for a 4-star resort in Bonnet Creek with a 4.5/5 guest rating. 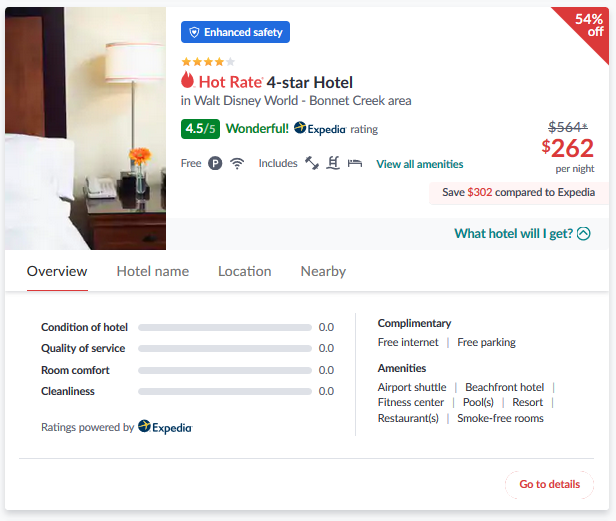 In addition to Yacht Club, there are 3 other resorts with that set of ratings right now: Animal Kingdom Lodge Kidani, Beach Club Villas, and Boardwalk Inn. Due to the drop on Priceline and my inexorable trek towards hidden deal enlightenment, I strongly believe the deals in November with this rating are Yacht Club.

I’d also like to point out one last oddity: when you click on the booking page for these likely Yacht Club deals, you may notice some amenities that don’t fit: Free Parking and Beachfront Hotel. Disney, of course, now charges for parking. And, the only beachfront I can think of in Bonnet Creek might be the sandy bottom of Stormalong Bay. Just know that both Priceline and Hotwire amenities sometimes go kerflooey. All of the other signs (including my Magic 8 Ball) point to this being Yacht Club. 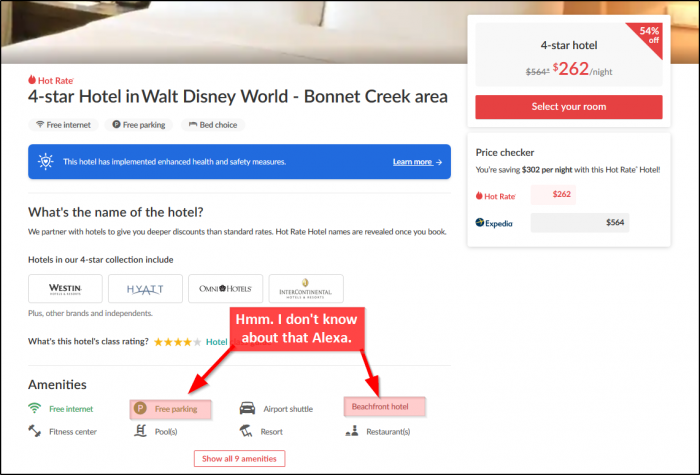 Now that you’ve made it this far, I shall reward you with the actual deals calendar… 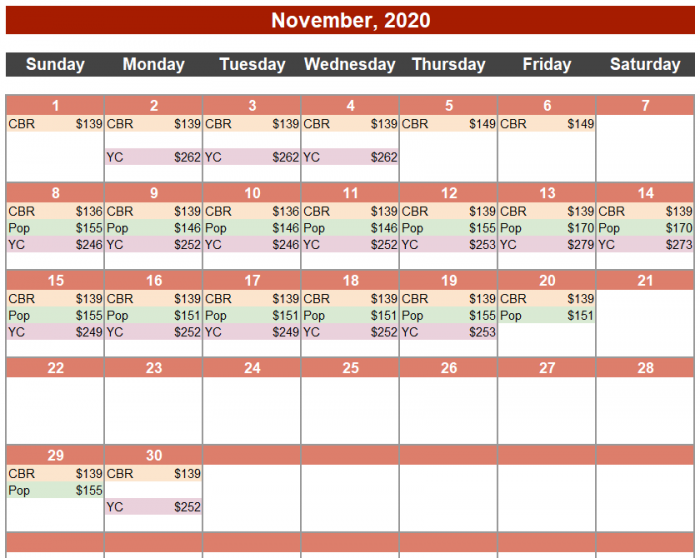 If you’ve booked any of these deals and/or discovered new ocean beachfront property in Bonnet Creek, let us know in the comments! 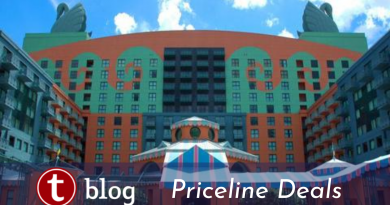 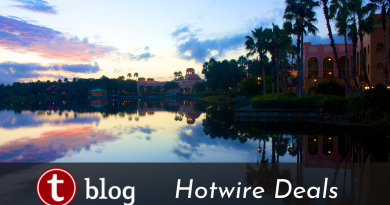 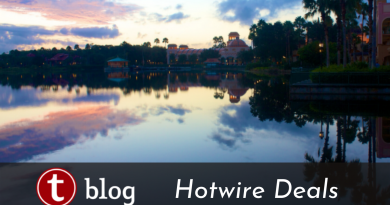