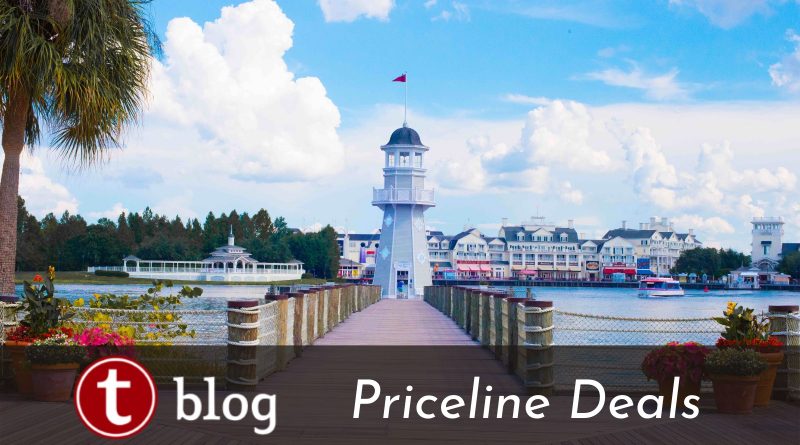 OK, people – grab your sailing caps and call your little buddies, the Yacht Club is calling!

For the last several months on Priceline Express, there have been some tantalizing deals: when you clicked on a 4-star resort in Bonnet Creek, you’d often see another deal for a 4* 9-guest rated resort pop up. However, as has happened with Priceline in the past those deals were ghosts: if you tried to book them you’d get a “Sorry! Deal is gone! Hahahahahah!” page. (I may have inferred the Hahahaha! part.)

Welp, Priceline has finally. . .  (select all that apply)
__Fixed
__Updated
__Whatever Priceline does in the background, who knows

You can now book these Yacht Club deals and they run from now all the way through Christmas! As an added bonus, you can also book a group of Coronado deals that had the same issue, but they are only out there in the last two weeks of October. (These Coronado deals are similar rates to those also on Hotwire right now.)

First: Check out these DVC Deals

Before we head into details, let’s jump out of the Priceline Express deals for a moment: with all of the various travel hub-bub going on, there are some terrific DVC deals going around. As I mentioned in my last post, you might want to check out DVC Reservations Flash Deals. Normally you’ll want to sign up for their email updates so you see these deals as they happen, since they seem to get snapped up quickly. But to handle the large number of last minute deals they have right now you can visit this page to see what’s available.

Now back to our regularly scheduled programming…

Now, these Yacht Club deals are not “cheap” in a way that will make you climb on top of your house and yell “Woohoo!” at all your neighbors as they stare up in disbelief. (Not that I have any experience with that.) I am willing to spend money for good value and that includes paying a bit more when I plan to have some quality resort time, but these deals are all in the mid $200s and up, which, to be honest, makes my wallet itch.

But, in comparison to Disney rates out there right now, you can save some serious coconuts. The table below is a quick thumbnail of the various rates out there for October 1. (Disney World’s birthday and my own, which I have always assumed is no coincidence.)

These Express Deals all appear to be Water View rooms and say so right on the booking page so I’ve used those current rates in the table. (I suggest you double check that if you book yourself, things can change.) Also, note that the Priceline Express Taxes and Fees includes their extra fee (about 8% more here) so makes that a larger percentage of the rate than the Disney direct taxes.

That full rack rate price makes me want to cease my roof-Woohooing and jump, so I hope all of you wait around for discounts like the ones shown at the bottom of the table. Assuming most people’s best bet right now is that Magic is Here rate, saving $201 *per night* is a very incredible difference in my opinion. I also checked third-party sites and Priceline’s non-hidden rate. The best water view room rates I found for that date were in the mid-$500s and up. (Yowza.)

How To Find These Deals

So, enough chit-chat: Here’s how to find these deals, followed by some calendars to give you an albatross’s eye-view of all the rates.

As usual, when searching for Disney resorts on Priceline Express, you’ll want to limit your search to the Bonnet Creek and Disney Springs areas. There are non-Disney resorts in those areas, so being there does not guarantee they are Disney and you want to compare various variables like ratings and reviews. For the purposes of today’s search, Yacht Club and Coronado are both in Bonnet Creek so you can even limit your search to just that one area.

The Coronado deals should appear in results normally if they are available for your dates. However, these Yacht Club deals likely won’t be in the first search results page, so you’ll have to use the same technique to tease them out that I recently outlined for the Dolphin deals in November.

When scrolling through your search results, click on whatever 4-star resort in Bonnet Creek you see. 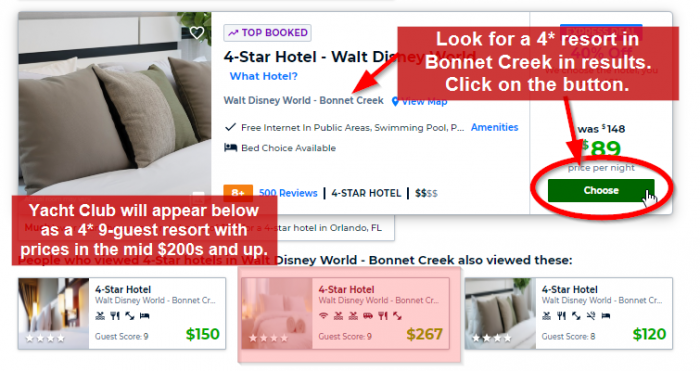 A new tab should open with that deal – you can ignore it tab for now. After you clicked, you likely saw some additional deals pop up below it. Look for a 4-star 9-guest-rated resort with prices in the mid-$200s or up. Here you can see there are two of them.

Let’s discuss figuring out this deal for a moment so that everyone reading is on board. You may want to get a beverage. We’ll wait for you.

From experience I know that Yacht Club for $150 is highly unlikely. Checking into that cheaper 9-guest deal I found it is actually for the new JW Marriott resort. If you click on it and go through to the booking page, you’ll see another clue it is not a Disney resort in the $35 mandatory (aka resort) fee.

Within Bonnet Creek right now, there are only four 4-star resorts with a 9-guest rating: the other two resorts are the Boulder Ridge Villas at Wilderness Lodge and Boardwalk Inn. When identifying hidden deals, a good tie-breaker to use is the review count, however these pop-up deals don’t show that. In this case, I would guess that Boulder Ridge is unlikely for that mid-$200s price and because it is much less common on Express Deals. That leaves us with this deal being either Boardwalk or Yacht Club – but because I am a geek and keep track of these deals, I know that Yacht Club usually has Spa as an amenity on Express Deals, while Boardwalk does not.

Things can change, but for now I am very confident that this deal is Yacht Club.

Once you click the likely Yacht Club deal, you’ll be able to choose a room type – this block of deals seem to all be water view!

When you go to the room booking page and expect it to be a Disney resort, always make sure there is no mandatory fee charge. Also, don’t forget to Google around for any current Priceline promo codes you might use to save even more money.

If you are trying to find the Coronado Springs deals I mentioned, look for a 3.5-star 8-guest-rated resort in Bonnet Creek with 400 reviews. (It currently has 495 reviews on Priceline, but they round that down in hidden deals.)

Now, the info you are waiting for – the deal calendars! 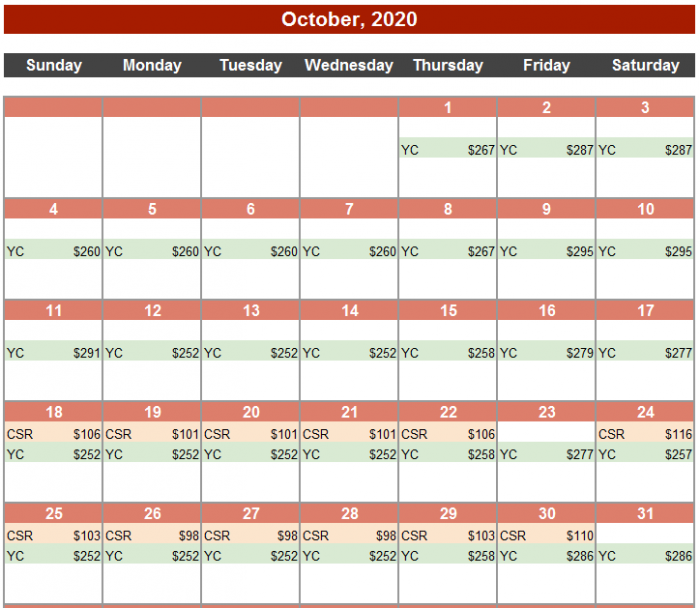 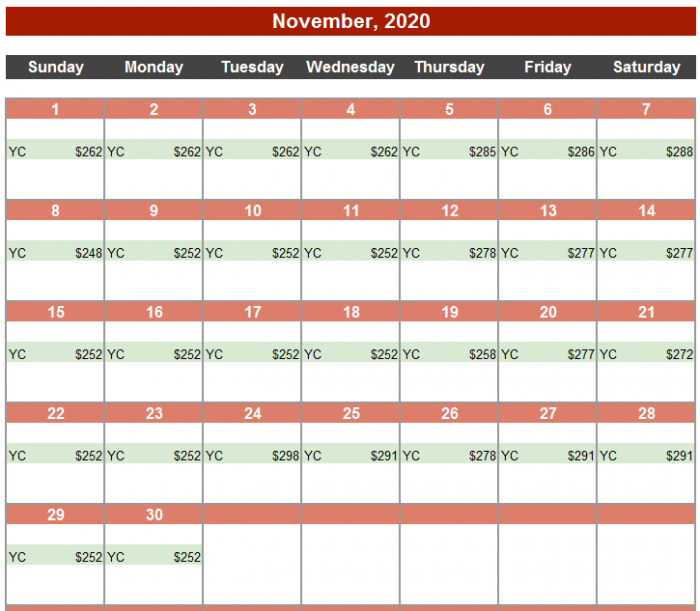 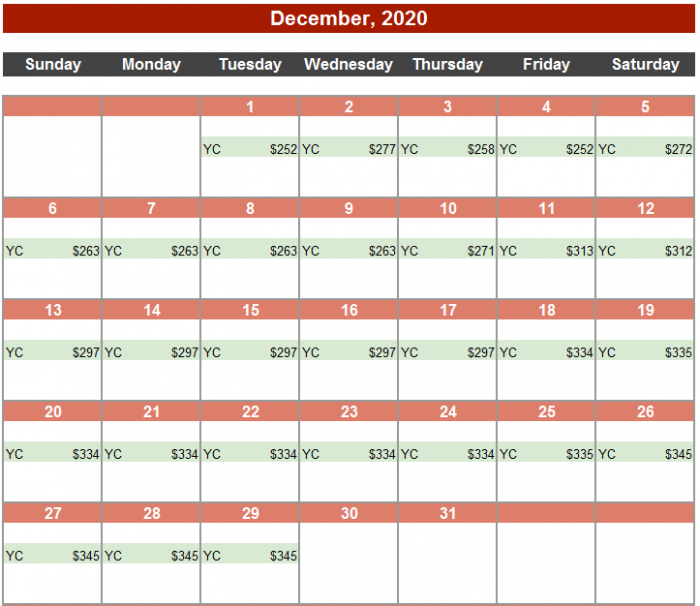 If you sail into any of these deals or have any questions, let us know in the comments!