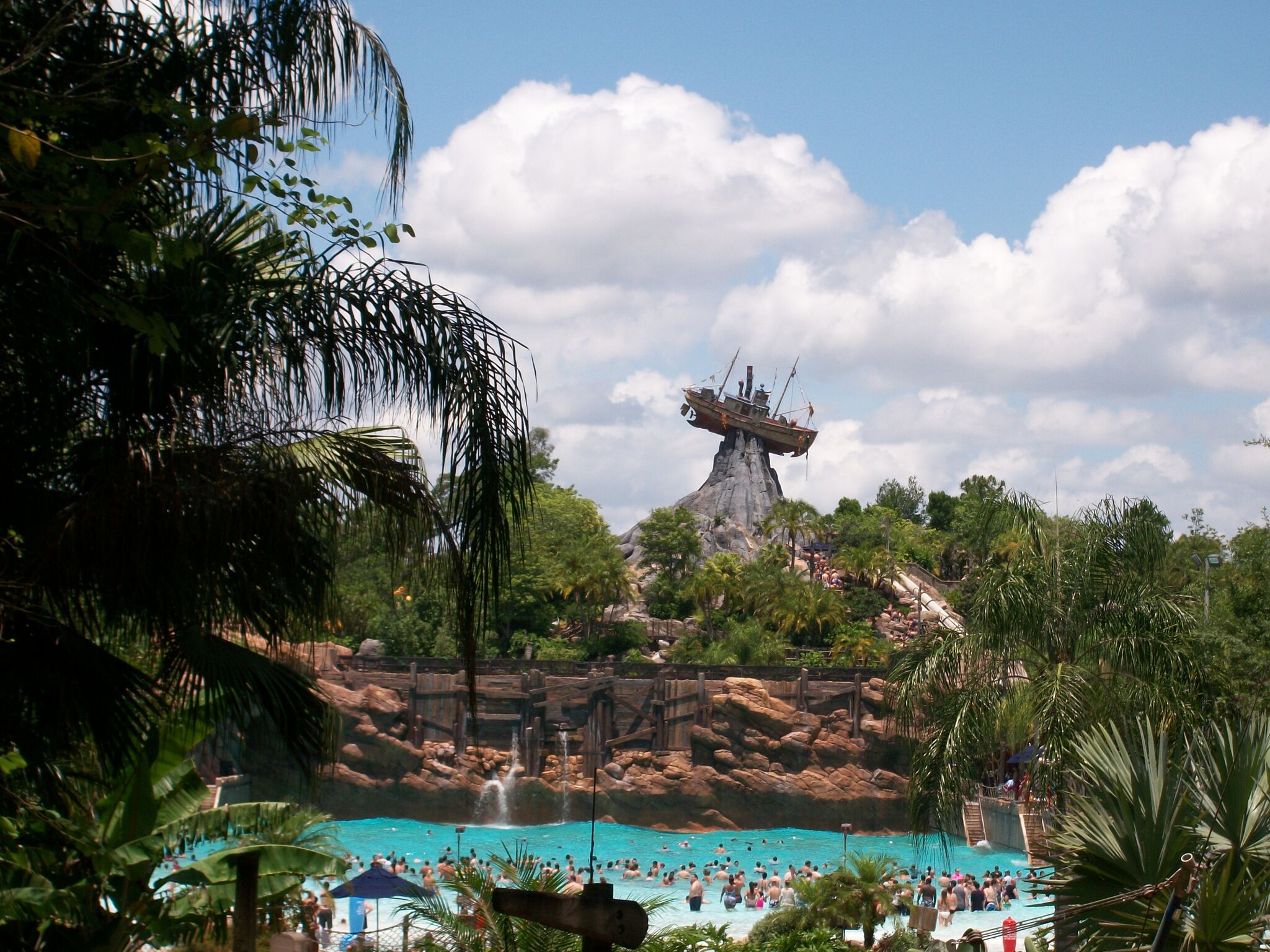 Are you a Disney Park critic? I know, it’s hard to be critical of anything Disney (at least I think so), but even I have to admit that I’ve experienced a few things that some parks don’t do as well as others. For today, I’m breaking down the Disney Park Strengths and Weaknesses of not just a theme park, but a water park! Yes, I’m wearing shades and dreaming of the waves as I analyze the Disney Park strengths and weaknesses of Disney’s Typhoon Lagoon.

Typhoon Lagoon first opened to guests in 1989 and is still famous to this day for its Surf Pool, which is the largest in North America and which boasts up to 6-foot waves! In true Disney fashion, Typhoon Lagoon has a theme and a story which is that a tropical typhoon tossed a tropical paradise upside down and left it rather windblown. This is why the buildings lean and the shrimp boat, “Miss Tilly,” is resting precariously on the peak of Mount Mayday!

Disney’s Typhoon Lagoon has 11 attractions, ranging from a themed play area for kids to enclosed water slides to Shark Reef where guests can snorkel among stingrays, tropical fish, and sharks!

Crush n’ Gusher – This Typhoon Lagoon attraction is Disney’s first and only water coaster! The story behind this coaster is that, before the typhoon, it was once a fruit processing plant and the slides or “chutes” once washed the fruit before it was packaged. There are three different chutes, each with their own ride experience! There’s the Banana Blaster which can have up to two riders, and then the Coconut Crusher and Pineapple Plunger which both can have up to three! This water coaster is a real strength for Typhoon Lagoon in that it provides that thrill factor, plus multiple experiences at one attraction. Note: Guests must be 48 inches to ride.

Laidback Experience – In comparison to Disney’s Blizzard Beach, Typhoon Lagoon offers a more laidback experience. This may be more of an opinion, but I think that Blizzard Beach, while incredibly themed, is exhausting! Most of the slides are on Mount Gushmore and in order to get to them, stairs are usually involved. There is a Chair Lift, I know, but I hate waiting in line to ride it up the mountain just to wait in line some more. Blizzard Beach can feel overwhelming in general as there is something to see and do pretty much everywhere; and at times, there’s absolutely nothing wrong with that. But at other times, particularly after several days going non-stop at Walt Disney World, I’m looking for an escape from the hustle and bustle and Typhoon Lagoon offers that island time experience I crave. In addition, I think Typhoon Lagoon’s laidback style is also ideal for parents with young children who may not be tall enough for some of the more thrilling slides.

Surf Pool/Surfing – The Surf Pool is the centerpiece of Typhoon Lagoon and for good reason! Seriously, this wave pool is so big and so extreme that, for me, it’s almost worth the price of admission alone. Now it’s important to note that the famous 6 foot waves aren’t continuous but released on a schedule. The best way to know when they’re coming is to listen for that “sonic boom” followed by fellow swimmers screams. Keep watching and you will see a wall of water pop up in the deep end and then come rolling toward you! Brace yourself and hang on as you’re swept towards the shore; and trust me, you will literally be swept off your feet! As these waves are strong, inner tubes are not allowed in the Surf Pool and guests will definitely want to keep an extra close eye on their kids or keep them in the shallow end, where the waves are much gentler and even relaxing near the white sand beaches. Can’t get enough of the waves? The Surf Pool offers surf sessions or surf lessons via reservation!

Less Crowded – In my experience, Typhoon Lagoon usually seems less crowded than Blizzard Beach. This could be because it typically is less crowded or because its slides are more spread out which better disperses crowds or because the Surf Pool is so spacious that it can accommodate large numbers. Yeah, I don’t know. Plus, this can all vary depending on when you check out the park. Still, I’m all about less crowds and maximizing my time, which is the Touring Plans way, and that’s why I list Typhoon Lagoon’s lack of congestion as a park strength.

Shark Reef – Another unique experience offered at Typhoon Lagoon is Shark Reef. As I’ve already mentioned, Shark Reef is where guests can snorkel among bonnethead and leopard sharks, stingrays, and fish. Shark Reef is saltwater and a little on the chilly side. A huge tanker, tossed by the storm, is partly submerged in the waters and allows those opting out of the experience to see what’s going on under the surface for themselves. But here’s the great part about Shark Reef, and one of the many reasons why it’s a major strength for the park: the equipment and experience is free! Yes, your snorkel, mask, and lifejacket is included with park admission!

Castaway Creek – One of the biggest reasons for why adults head to the water parks is for the lazy river; and after several days of hiking through the Disney Parks in Central Florida heat, probably at no time does a float down on a lazy river sound so good! Castaway Creek is Typhoon Lagoon’s lazy river and is 2,000 feet of relaxation. Guests carried by the current pass by tropical rainforests, waterfalls, through a cave, and even by few items that were left in the wake of the typhoon. What’s also great about Castaway Creek is that it encircles the whole park and it’s an attraction, apart from the Surf Pool, where the whole family can enjoy together and for as long as they choose.

Weak Theme – Theming at times is in the eye of the beholder, but I’m going to express my personal view on this. Do I like Typhoon Lagoon’s theme? Absolutely! The whole windswept, topsy-turvy décor is fun and witty, and I also get the feeling that I’m truly on a tropical island. But then, there’s Blizzard Beach’s theme which sounds so crazy it’s good and what’s better is that they actually pulled it off! Yes, Blizzard Beach’s theme is that of a melting ski resort where ski runs have been turned into slides and snow has melted into lazy rivers and pools, and to make it appear real Imagineers have dotted the landscape with white snow drifts and Alpine lodges and even icicles! So while I enjoy Typhoon Lagoon’s theme, it does seem less creative in comparison to the totally unique experience of Blizzard Beach.

Counter Service Choices – Yes, I know water parks are exactly known for their culinary achievements, but couldn’t they be? I mean, this is Disney World, right? Besides, I’m always starving after a few hours in the sun and surf. Anyway, Typhoon Lagoon has a number of stands to get a snack or some hydration, and a few counter service spots to grab a meal. There’s Typhoon Tilly’s, which isn’t too bad with a menu of fish and shrimp baskets, wraps, and barbecue sandwiches. The Snack Shack offers similar items, but I give them extra points for offering a fruit and waffle sandwich. Yum! Leaning Palms probably offers the largest menu, and with the exception of an item or two, features mostly sandwiches or the safe choice of pizza or chicken strips. Again, I’m not expecting Le Cellier Steakhouse or the Be Our Guest Restaurant at a water park, but it’s hard to fork over so much cash for something I probably don’t really want anyway and that’s why I have to list Typhoon Lagoon’s counter service choices as a park weakness.

Note: Typhoon Lagoon is currently closed for refurbishment but is schedule to reopen 3/12/16.

So have you ever visited Typhoon Lagoon? Do you agree with my strengths or weaknesses, or do you have a strength or weakness to add to the list? Let me know!