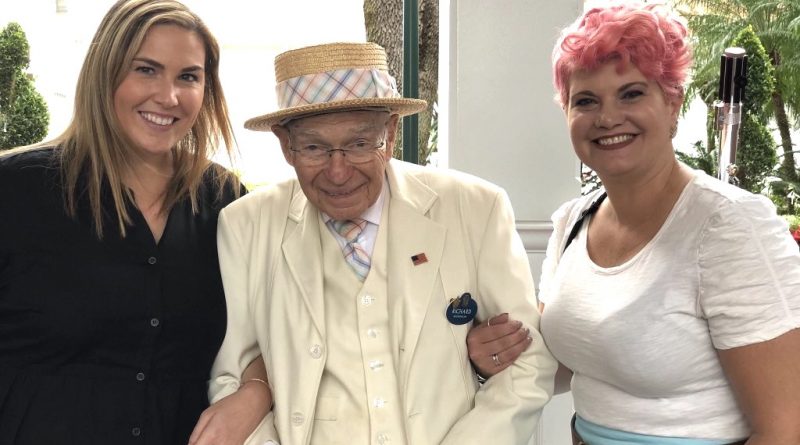 This week’s SATURDAY SIX takes a look at What We Lost From the Theme Park World in 2018. As theme park fans, we’ve had a lot to be thankful for this year. However, as much as we all loved the Sauce Slinger at Chicken Guy! and Bar 17 Bistro at the top of Universal’s Aventura Hotel, it wasn’t all good news. We did have to say goodbye to some of our favorites at Disney and Universal. Without further ado, let’s kickoff the list with…

As theme park attractions go, the Eighth Voyage of Sindbad was not a great one. As stunt shows go… well, Sindbad was still not a great one. All the quality humor, top notch action, and actual thrills that you would get at a show like the Indiana Jones Stunt Spectacular! at Disney’s Hollywood Studios is completely missing from Sindbad. The show had received poor ratings from guests for a long time, and although Sindbad took a rather long refurbishment in 2015, it came back as pretty much the exact same show. This is reminiscent of Disney putting a $1,000,000 into the kitchen of PizzeRizzo only to serve the exact same crappy food that Pizza Planet offered.

We have to admit, the set looked great. To steal a line from Bobby “the Brain” Heenan, it had a million dollar body and a ten cent brain. If you like rather loud explosions done fairly often, you just may have enjoyed Sindbad while the rest of us were suffering from the onset of PTSD. The show’s script tried to be both serious and silly, and unfortunately didn’t do either particularly well.

This aerial shot by @bioreconstruct shows where Sindbad theater is in relation the Wizarding World of Harry Potter – Hogsmeade. Now, conventional wisdom would make you think the stunt show should be something Potter-themed, or at least let the popular Wizarding World expand outward. However, all indications from Those Who Would Know say that the original replacement for Sindbad was going to be based around The Legend of Zelda game from Nintendo. You may think, “That’s unexpected,” but keep in mind this is a company that in 2019 will (most likely) debut a brand new stunt show based around – of all things – the Jason Bourne franchise. No one saw that coming. That’s over in Universal Studios Florida though, as for what will replace Sindbad… well, we will have to wait and see.

When Toy Story Land made its debut this summer at Disney’s Hollywood Studios, it was just what the doctor ordered. A park which desperately needed more rides got some in the form of Alien Swirling Saucers and Slinky Dog Dash.  Because both rides were kid friendly, it took pressure off the park’s Gotta Get FastPass, Toy Story Midway Mania. And the mega-popular Toy Story franchise got a bigger presence at Walt Disney World ahead of what will surely be a gigantic smash hit in 2019’s Toy Story 4.

Possibly the biggest surprise of Toy Story Land  – not counting all the elements that were cut from the land – was the menu for Woody’s Lunchbox, the area’s only quick service offering. If there was ever a time when you would expect the same ol’ chicken fingers and hamburgers, this would be it. However, Woody’s Lunchbox went the other way and delivered a menu that was pretty unique, with items such as a BBQ brisket melt, totchos, and an incredible s’mores french toast sandwich. One item that caught the eye of many guests was the Monte Cristo sandwich. For those who have been to Disneyland, the Monte Cristo served at the Blue Bayou is just as beloved as our cheddar cheese soup at Le Cellier. Granted, the Monte Cristo at Toy Story Land wasn’t even a poor man’s version of the Blue Bayou’s offering – it was more like a homeless man’s version – but at least it was a Monte Cristo at Walt Disney World! The dream came to a quick end though, as the Monte Cristo was taken off the menu by the middle of July, despite the grand opening of Toy Story Land being just two weeks before at the end of June. As they say, the brightest flames burn the quickest…

Despite the Siemens sponsorship of Disney attractions ending in October of 2017 – after a 12 year run – it wasn’t until this year when Disney finally got around to taking the company’s name off all the signage at Spaceship Earth. In March, the Siemens logo was taken off the outdoor signs, but it wasn’t until June when the indoor signage was finally changed. While the history of Disney has been forged in sponsorships, for me personally I have only associated a couple with attractions, and all of them at EPCOT. Thanks to that unbelievably great comic book back in 1985, I’ll always think of Exxon when it comes to the Universe of Energy. For me, Kodak and the Imagination Pavilion go hand in hand. Siemens and Spaceship Earth was another one.

A longtime favorite of TouringPlans readers, Emeril’s Orlando was the Florida outpost of Emeril Lagasse’s New Orleans restaurant and at one point had the best food and wine list within all of CityWalk. In the past few years – with the addition of  Vivo Italian Kitchen, Antojitos Authentic Mexican, and The Cowfish – the quality of CityWalk’s restaurant game has skyrockted, but Emeril’s was always battling for the top spot in terms of quality food and great service. The menu was routinely updated with creative dishes, the happy hour was a wonderful deal, and the signature Banana Creme Pie dessert was worth going out of your way to try. In July, Emeril’s closed down, and the restaurant’s former home is prime real estate at Universal, overlooking the park’s lagoon as you make your way to Islands of Adventure.

The giant World of Disney store in Disney Springs has somehow gotten bigger and completely transformed itself. If you haven’t been in a while, the experience is completely different than what it used to be. The old theme of World of Disney was – I believe – COMPLETE CHAOS. Or maybe Disney was just way ahead of the curve on deigning an “escape room” because the building was separated into several areas, all closed in by walls, and generally was so busy and packed that when walking through the store trying to shop you would feel like Marcus Brody in Indiana Jones and the Last Crusade. The new theme of the store includes a backstory that the area has been converted from a former animation studio, or at least some giant minimalist warehouse that Disney put all the animators in. To quote Tony Stark in Captain America: Civil War, the store received a “systemic, top to bottom, 100-point restoration.” The walls separating the areas are gone, which allows for a much more open design and not as congested. Not only was everything changed on the inside, but the iconic logo itself was changed as well. Instead of an “old world” type sign printed on top of a map, we now have a “modern” design.

More often, the losses of people are felt more often than the losses of things. There are some intangibles that truly make a Walt Disney World vacation a one-of-a-kind experience. Generally speaking, front line Cast Members often have a huge impact on the guest experience, and one of our favorite CMs was Richard Gerth, one of the greeters at Disney’s Grand Floridian Resort. Dressed in his cream colored three piece suit and straw hat, Richard set the tone of a Grand Floridian experience as his kindness and warm smile welcomed every guest. He was a staple of the resort, and someone who could brighten your day, just ask any of the thousands of guests who asked to take their picture with him. In June, Richard passed away at 92 years of age, with over 30 years of interacting with guests at Walt Disney World. He touched the lives of many, and will live on in our memories forever. So there you have it: In Memoriam 2018… See you next weekend for the latest installment of the SATURDAY SIX, where we’ll look at something fun from the world of Disney and Universal. If you enjoyed yourself, be sure to check out The Magic, The Memories, and Merch! articles, or, for your listening pleasure, check out the E-Ticket Report podcast. You can also follow Your Humble Author on Twitter (@derekburgan).

Special Thanks to The Elite Brandon Glover, my personal protege Hunter “Elvey” Underwood, hot shot Michael Carelli, the bio-est of all reconstructs @bioreconstruct, Mr. ‘Ohana Tim Grassey, the King of Universal Orlando Seth Kubersky, and Hermione Granger’s tutor Megan Stump for their invaluable assistance with this article. The SAT SIX is inspired each week by goofballs Aengus Mackenzie and LitemAndHyde and you Potterheads will  enjoy Meg’s other blog work over at the Central Florida Slug Club.

3 thoughts on “IN MEMORIAM: Looking Back at What We Lost From the Theme Park World in 2018”