Hello. This is continuation of my walk through the various lands in the Magic Kingdom. This week we see how Liberty Square and Frontierland share a a lot of things in common but remain distinctly different in feel.

For more of this type of stuff I invite you to visit SamLand’s Disney Adventures.

Liberty Square is a carefully designed, fully immersive, urban environment. The staging of the design elements is meant to slow you down and soak up the atmosphere. The high level of detail is necessary because this land reflects the qualities of places that really exist and would be accessible to many of Walt Disney World’s visitors. The challenge for the design team was to create, as described by the Imagineers, an “enhanced reality” that is “better than real”.

This is something the Imagineers learned from the animators. In animation, successful storytelling requires you to find a way to suspend people’s disbelief so they could accept talking animals, puppets, clocks, beasts, etc. Walt Disney discovered that you had to create what he called the “plausible impossible”. One method was using highly detailed backgrounds. These backgrounds helped your imagination to accept that you have entered a real place. Once you have accepted the story’s time and location you could begin to accept whatever action was taking place in the foreground. This is how animators make the impossible possible.

Imagineers use a similar technique in the design phase for a project known as “eyewash”. Eyewash is used when the Imagineers are pitching a new concept and it is carried through to the finished environment. The designers are taught to take their idea to its extreme then illustrate it in such a way that makes it seem realistic. The details turn an idea that seems impossible into something that even the accountants will want built.

The design details of Liberty Square capture that early American spirit and set the stage for the shops and attractions. The setting is an urban experience with narrow streets that wind around the buildings. The buildings help to frame this space and create an outdoor room that is alive with storefronts, restaurants, and rocking chairs. The river adds that fourth wall which creates the coziest land in the Magic Kingdom.

Liberty Square is organized around a strong central element. In this case, the central element is the public square and the Liberty Tree. There are minimal vistas outside of Liberty Square. Only a glimpse of Frontierland can be seen from within the land. This preview of Frontierland is important because it becomes the second act in the Magic Kingdom’s time travel story.

Like a movie, the designers have used a consistent thematic thread that ties the two lands together. Combined, Liberty Square and Frontierland will take you through from the east coast of Colonial America and end some at the close of the American frontier in the late 1880s.

Liberty Square and Frontierland use typological architectural details that provide us clues for our trip through time and geography. In Liberty Square, our trip begins in New York along the banks of the lower Hudson River in the early 1700s. The Haunted Mansion is based on the gothic architecture of the Harry Packer Mansion built in 1874 in Jim Thorpe, Pennsylvania. The brickwork, heavy stone base and cornerstones, are typical of English Tudor buildings. The building is away from the main square and off to the side. Frankly, the Disneyland version seems like a nice suburban house. This one is kind of scary.

And don’t speed past the cemetery at the end. You will miss something special in the upper left hand corner. One of my favorite Disney characters has taken up a permanent home at the Magic Kingdom. At least he is still alive in Disneyland.

The Columbia Harbor House would feel right at home in the port city of Boston in the mid-1700s. It is also the site of a brilliant transition from one land to the next. The upper dining room bridges over the walkway. One side is themed to Fantasyland and the other is all Liberty Square. This effect is used in other places between Adventureland and Frontierland. Keep an eye out for it. You are probably rushing to the restroom when this magic happens.

Leaving the Haunted Mansion, the buildings begin to take on the Georgian style, which was popular in Williamsburg during the late 1700s. In just that short distance we have moved almost 50 years. The Hall of Presidents is modeled after buildings in Philadelphia at the time of the Constitution’s adoption in 1787. This structure is the centerpiece to the land. Everything else supports this structure. The Liberty Tree helps to soften the public square that is frame by the Hall, the shops, the loading dock for the Liberty Belle, and most importantly, the Rivers of America and the island representing the endless western frontier and the end to our first act.

Liberty Square is not merely a reproduction of a colonial village. It is way too clean. But it has an urban complexity that doesn’t really exist elsewhere in the Magic Kingdom. Much like New Orleans Square at Disneyland (which it is modeled after) it uses its design elements, compact design, winding pathways, blend of hardscapes and supporting plant materials to create the sensation of being in another time and place.

Speaking of Disneyland, Liberty Square was first thought of as an offshoot of Main Street USA. On the earliest park souvenir map drawn by Sam McKim, is an area called Liberty Street. In the space where the parade exists in Town Square plus the lonely wooden structure between the Opera House and the stores has long been the entrance to another land. At first it was International Street – the precursor to the World Showcase at Epcot. In 1958 that concept was put back into the draw and flipped to Liberty Street. Another example of how Imagineers never let a good idea really die.

The building that bridges the divide between the two lands is the Diamond Horseshoe Saloon. The western migration had a natural border – the Mississippi River. At the water’s edge was the mighty city of St. Louis. In the 1820s, this type of building would have been typical. It is from here we begin our second act in this historical epic.

Next week we continue along that strip mall we like to call Frontierland. 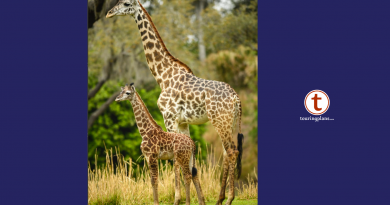 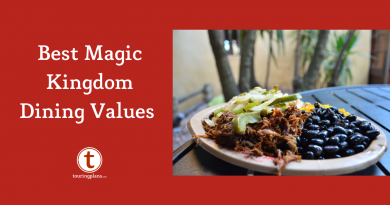 The Best Dining Values at the Magic Kingdom