A perennial question among Walt Disney World travelers is, “How do I decide where to stay?”

Over time, I’ve stayed at every Walt Disney World resort except the Fort Wilderness cabins, and I have toured those, so I am quite familiar with the pros and cons of each type of lodging. I can spend hours parsing the relative merits of room size, transportation options, location, pools, and restaurants, but I’ve finally concluded that deciding factor for me is the bathroom situation.

I’m going to be elaborating here, the squeamish among you can move along.

During the past two years, here is a sampling of some of my Walt Disney World hotel stays:

As you can see, I’ve recently experienced the full range of Disney hotel offerings, from living large to just the basics. Having so much variety within a relatively short of amount of time has allowed me to crystalize my thoughts on Disney hotel stays. Depending on the type of vacation I’m having, I’m equally as fine with cheap and simple as I am with posh and pricey. What I’m not fine with is waiting for the bathroom, or feeling pressured because someone else is waiting around while I use the bathroom. I’ve learned that when I’m at Walt Disney World, I want to be at Walt Disney World, not negotiating whose turn it is to use the toilet.

I have found that most hotel room features or resort amenities can be accommodated for in other ways. Don’t like waiting for a bus at the values? Rent a car. Don’t like the bargain shampoo/conditioner combo at a value? Bring your own toiletries. Want more/better meals than what they’re serving at the food court? Go ahead and eat at a different resort. But when you’re trying to get ready in the morning, the bathroom structure in your room is immutable and, well, impactful.

For example, staying solo at any level of resort works well for bathroom use. Obviously no one is fighting me for the facilities there. From this perspective, there is no difference to me between the value, moderate, and deluxe stays; as long as the facilities are clean and functional, I’m happy. If I’m busy doing research or otherwise “working,” saving money by staying at a value is all good in my book.

I’ve also been fine when staying in any level room with my husband or just one of my daughters. Two people can easily work out their morning routine to stay out of each other’s way during the, um, business portion of the morning.

However, my most recent WDW stay was at in a studio the Beach Club villas with my husband. Most of the time we were okey-dokey sharing the one bathroom, but (not to put too fine a point on things) we really struggled on the morning of the half marathon, which we both ran. Our “timing” was off because of the 3:00 a.m. wake up call and our nervous first-race stomachs. Hubby ended up taking advantage of the facilities in the hotel lobby, but neither of us felt this was an ideal solution. Sometimes you just want to have your own space, ya know?

Things get further complicated when you’re sharing a bathroom with more people. My more challenging hotel stays have been when I’ve been in groups of three or more people sharing one bathroom. Perhaps this has to do with the composition of my particular family. My three daughters are all teens and tweens. And did I mention that they’re girls? And did I mention that they’re teens and tweens, with all the adolescent angst that goes along with this? Oh, and they all have really long hair, which needs to be washed, and dried, and styled, and maybe styled again depending on the weather. This means they each need a solid half hour minimumof quality bathroom time each morning, even if they’ve showered the night before.

Making rope drop ain’t gonna happen with this crew when we’re all competing for one commode or mirror. That’s a real problem for my touringplan-following, type-A personality.

Our recent stay with the most family conflict was in the studio at Old Key West. We had plenty of space for sleep, but when we four women tried to get washed and dressed in time for a Chef Mickey’s breakfast, more than a little chaos ensued. Conversely, our best stay was at the Animal Kingdom Lodge. Not because of the huge amount of space (which there was) or the view of the zebras (super cool), but because we had three glorious bathrooms. The ALK situation worked better for us than even the two bedrooms at the, in my opinion, much better located Polynesian, all because we had an additional bathroom.

My new biggest criteria for deciding where to stay is our ability to keep our person to bathroom ratio low. If the five of us are traveling together, I would rather stay in a value resort family suite with two bathrooms than in a standard room in a deluxe with just the one bathroom. No amount of monorail access and complimentary H2O conditioner is worth a catfight. But maybe that’s just me.

How does your family cope with bathroom issues on vacation? Does it matter to you if the toilet and shower are in separate rooms? Does it matter if you have two sinks? Do you mind sharing a bathroom with non-nuclear-family traveling companions (like a friend, or your mother-in-law)? What odd things are the deciding factors for where you decide to stay? Let us know in the comments below.

Disney Hotel Amenities: The Good, The Bad, and The Unnecessary 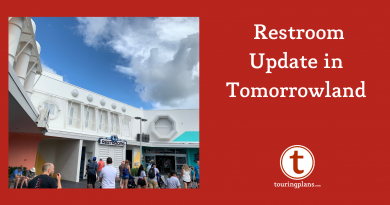 A Bathroom Innovation in Tomorrowland

Hotel Room Hacks: Ways to Make the Most of the Supplies in Your Walt Disney World Hotel Room

36 thoughts on “Choosing A Disney World Hotel: It’s All About the Bathroom”