Note 2019 – Some of the information in this post is now outdated. Please refer to our newer post on this topic for current information: Get to Know the WDW Transportation and Ticket Center

If you’re planning a trip to Walt Disney World, chances are you’ll encounter the term “TTC.” TTC is the Transportation and Ticket Center and we’re here to tell you what it’s all about.

The TTC is, not surprisingly, a major transportation hub at Walt Disney World, serving as a transfer point between boats, buses, and monorails, as well as the parking center for guests driving to the Magic Kingdom.

Take a look at this map of Walt Disney World and you’ll see the TTC in the lower center of the blue blob. It doesn’t look like much, but it can be a big help in getting you from point A to point B. And knowing how navigate the TTC can mean the difference between making the trip from A to B pleasant and efficient or making it a looong night of waiting around. Now lets zoom in to see the components of the TTC itself. Here’s the Google Earth satellite view of the area. And then the same thing in map form. From looking at these views, one of the first things you’ll notice is the proximity of the TTC to the Polynesian hotel. Disney does a lot of architectural and landscape design magic to camouflage sight lines, but the aerial overview makes it plain that walking from the Poly to the TTC is an easy option. Guests at the Polynesian effectively have quick monorail access to both the Magic Kingdom AND Epcot. For example, if you’re staying at the nearby Grand Floridian you have one-stop access to the MK, but if you want to get to Epcot, you’ll have to take the resort monorail to the TTC and then switch and wait for the Epcot monorail. Poly guests can skip the stop and wait step and instead walk directly to the Epcot monorail line.

Another element that’s plain from the map view is that the Magic Kingdom parking lot is HUGE. Only a small portion of it is shown here, but rest assured that it goes on for-evah. If you’re visiting the Animal Kingdom, you could probably get away with walking from your distant parking spot to the park. Walking from the furthest reaches of the MK parking to the TTC is a hike worthy of a day pack all on its own. You’ll want to take advantage of the free tram system that shuttles guests from the parking lot to the main TTC area. But before you get on the tram MAKE NOTE OF WHICH SECTION YOU’VE PARKED IN. Write it down. Snap a photo with your cell phone. Tell your kids (they have better memories than you do). Just be sure to remember where you parked.

Bonus tip: If you’re driving a rental car, also make note of your car’s make, model, and plate number. Again, a quick phone photo takes care of this. Once I knew where I parked, but it took me a while walking down the row to figure out which car was mine. If you have a rental with remote key fob access, you can click the fob to make the horn honk, but not all rentals have this feature.

If you’re going to be switching forms of transportation at the TTC (monorail to bus, for example), make a quick mental note of the relative map positions of these areas so you know which way to turn.

In addition to the transportation component of the TTC, there is also the Ticketing function of this area. Back in the late 1980s, I remember waiting at the TTC for hours just to buy tickets to the Magic Kingdom. However, this type of situation is now quite rare. Park tickets can be purchased in advance online, through third party vendors, at Disney Store retail locations, and at Disney and non-Disney hotels throughout central Florida. You can also buy tickets directly at the gates of any of the theme parks.

If you do need tickets and want to buy them at the TTC, you can do this at automated kiosks (like an ATM) or at human-staffed windows. There is also a “Will Call” window to pick up some categories of reserved tickets.

OTHER PARTS OF THE TTC

Along with the eponymous Transportation and Ticketing elements of the TTC, there are a few other features of note. The TTC is the location of the general Walt Disney World lost and found. If you’ve lost something in one of the parks and it’s been 24 hours, the TTC is where you’ll have to go to claim your item.

The TTC is the location of the pick up spot for the Richard Petty Driving Experience shuttle, located next to the Lost and Found building.

Other basic amenities at the TTC include pay phones, ATMs, mailboxes, vending machines, a rudimentary snack bar (think coffee and pastries), and two sets of restrooms (located near the ferry dock and near the bus zone).

There is also a small gift shop with some souvenirs and snacks for sale. This is a great place to pick up an autograph book if you want to have it in hand before you get to the park.

Personally, I wish that the TTC was a bit more scenic and entertaining, with at least a cursory attempt at a Disney magic feel. After all, the first time many guests end up setting foot on Disney property will be at the TTC. Instead the place really looks like the bus/train station that it is.

On the plus side, the TTC is quite functional. The signage is good and it does have the fundamental services you need to start your day in the parks.

Let us know about your TTC experiences. Have you been able to find your way around easily? Do you have any tips for making your time at the TTC more efficient or enjoyable? Tell us in the comments! 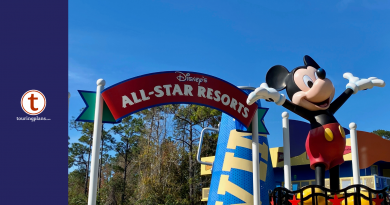