Most guests at Disneyland Park are trying to cram as many attractions into their day as possible (and luckily we have an app for that), but repeat visitors who are looking to slow down and smell the flowers should really consider the Disneyland Cultivating the Magic Tour.

While not as popular as the often sold-out Walk in Walt’s Footsteps Tour, nor as family-oriented as the Discover the Magic Tour, the Disneyland Cultivating the Magic Tour is reasonably priced ($50, Annual Pass and Disney Visa discounts available) and highly recommended to anyone with thumbs the slightest shade of green.

As an added bonus, you’ll get a front-of-the-line access to a trio of attractions, and receive a couple cool souvenirs, which I’ll describe in the second part of this series. I already considered myself well versed in Disneyland’s horticultural history, but I took the tour for the first time late last year and came away with a wealth of new knowledge.

Here’s a photographic recreation of my recent Cultivating the Magic Tour experience, along with a selection of the fascinating facts I picked during our exploration of the Happiest Plants on Earth.

Like all tours in Disneyland Park, we began by checking in on Main Street, U.S.A., at the tour pavilion just inside the left-hand entry tunnel, where we met our guide Karen from Bakersfield, California. She quickly proved to be every bit as friendly, knoweldgeable, and articulate as you’d expect a Disneyland VIP tour guide to be. 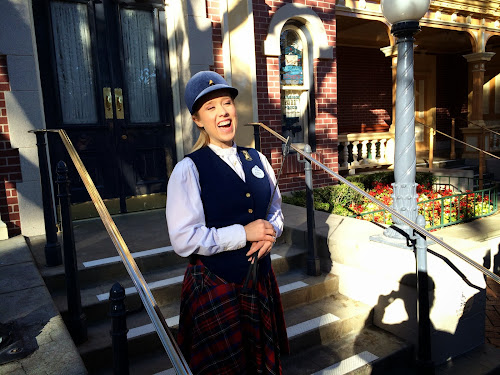 We started with the famous Mickey Mouse floral in front of the train station, which is created with over 3600 flowers.The scrolls bordering Mickey’s head are changed out up to 9 times annually, and use up to 10,000 flowers. 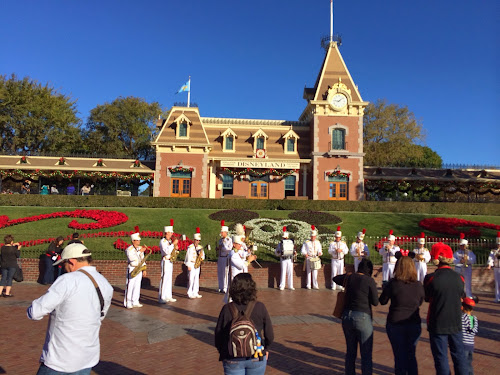 Our stroll up Main Street, U.S.A., started with a primer on Bill and Jack Evans, a pair of brothers who essentially invented themed landscaping in American theme parks. Starting with the design of of Walt’s personal backyard railroad in 1952, Bill Evans had a hand in the greenery at every Disney park through Animal Kingdom. 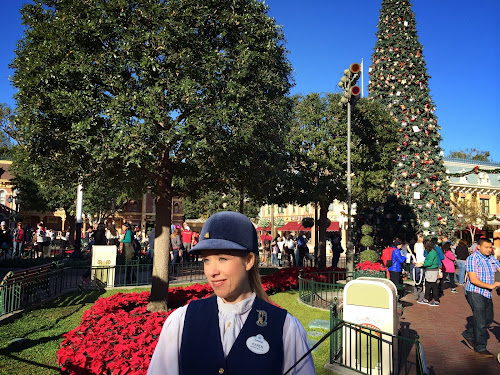 A constant challenge is trees outgrowing the careful scale created by Main Street, U.S.A.’s forced perspective buildings. The trees currently near the train station were moved there from further up the street when they outgrew their original spots. 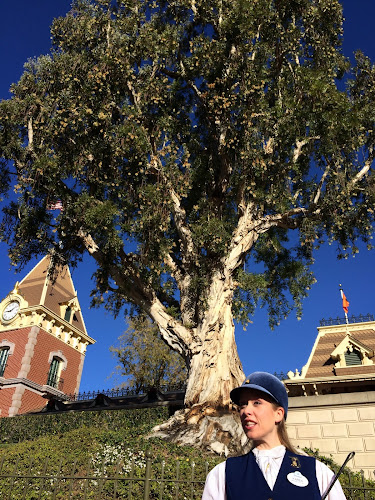 Likewise, the original Chinese evergreen elms on the Hub had to be removed after 27 years. The current ones were planted in 2005. 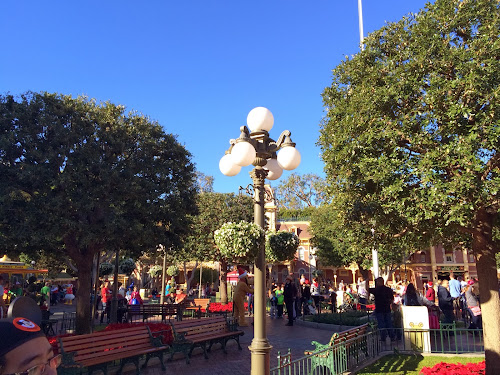 My visit coincided with Christmas time, so there were over 20,000 poinsettias planted around the resort. 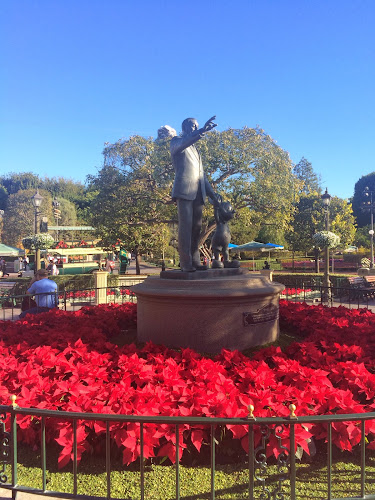 Next we entered Adventureland, an exemplar of Bill Evans’ efforts to contrast civilized vs. uncivilized space. 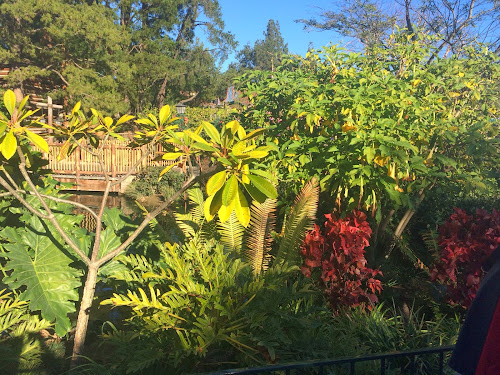 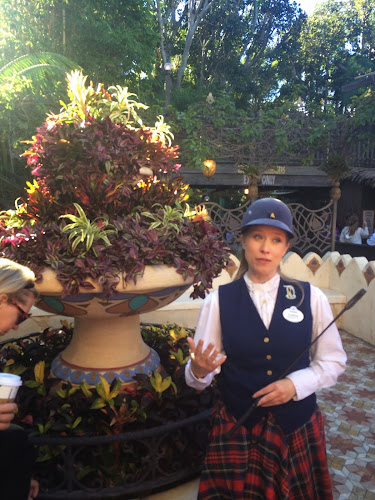 We jumped aboard a private Jungle Cruise boat. Instead of the usual comic skipper spiel, our guide pointed out some of the natural wonders in this opening day attraction. 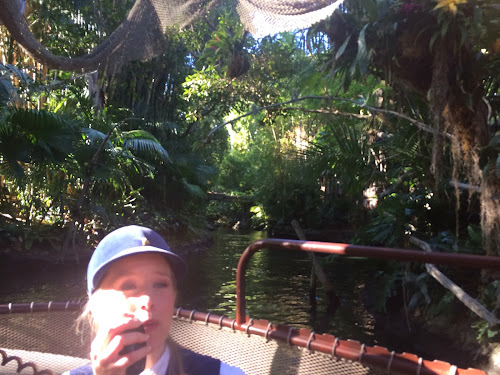 7 different types of bamboo form the backbone of Disneyland’s jungles. They can grow up to 12″ per day!

The “mangrove” trees are actually the exposed roots of full-grown orange and walnut trees that were replanted upside down. 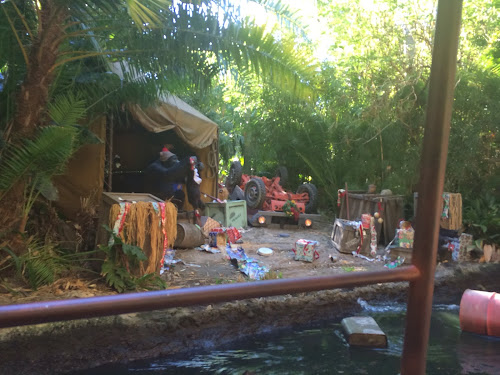 The Dominguez Palm is a large Canary Island date palm named after the family that originally owned the property upon which Disneyland was built.

New Orleans Square was the first new land added to the park after opening. 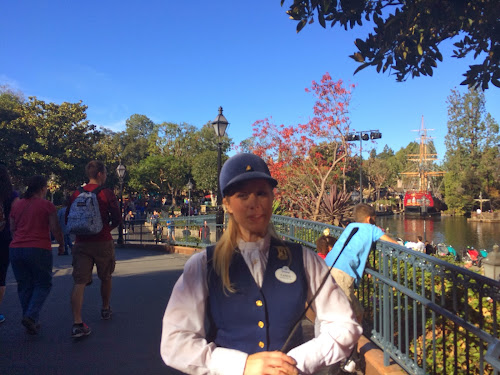 This enormous rubber tree was transplanted here by Evans, and still had an old gas pipe entwined in its roots. 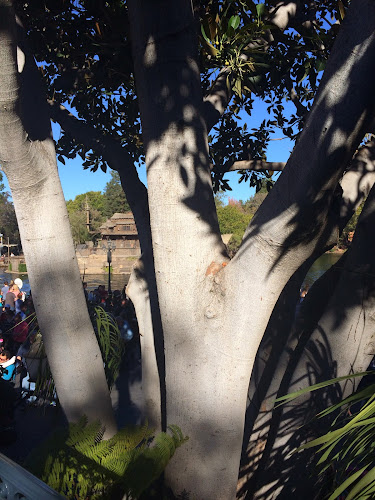 The gardening becomes less cheerful as you approach the Haunted Mansion, and no blooming flowers are used on the attraction’s grounds except funereal lilies. Here we got our second rock-star ride access of the day at the uber-popular Haunted Mansion Holiday. 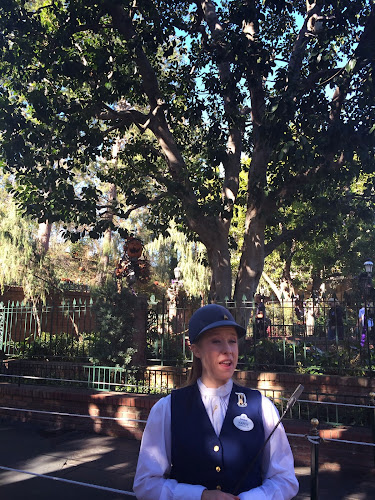 The tall trees at the Mansion’s exit are Italian cypress. 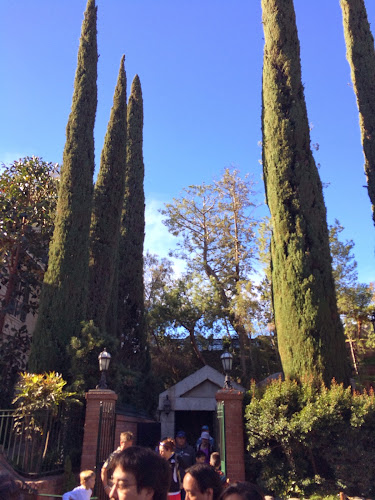 Next door in Critter Country, the grass on Splash Mountain is trimmed shorter the higher up Chickapin Hill it grows to maintain the sense of scale. 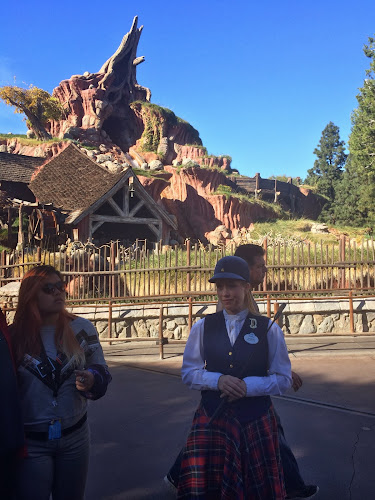 A mountain-shaped tree cleverly hides the view of the Matterhorn from New Orleans Square.

Finally, this pot of rosemary marks the transition between New Orleans Square and Frontierland, which will be the subject of the next part in this series. 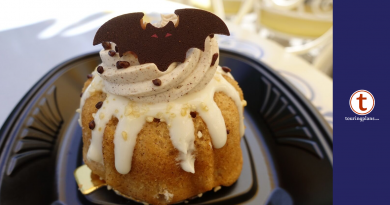