Today we are finishing up our three part photo tour of Downtown Disney. Part One looked at the West Side, the new parking garage, and the current construction going on around Pleasure Island. Part Two looked at several venues within the Marketplace and the new pedestrian bridge across Village Lake. We’re going to close out with a look at some items from two of my favorite stores to walk through in Downtown Disney. First up is the Marketplace Co-Op, which opened up earlier this summer replacing the awful Team Disney store. I personally always thought that Team Disney had the opportunity to sell some really unique items based on all the incredible sports movies that Disney has made over the year. Imagine hockey jerseys based off the characters and teams from the Mighty Ducks series of films, or shirts with various Disney characters in the gear of professional teams or even just made up teams from the Disney Universe like maybe a Junior Woodchucks soccer team from the DuckTales universe. Instead, Team Disney for the most part just sold the same MLB and NFL stuff you could get any Sports Authority or Target near you.

Miraculously, Team Disney was transformed earlier this summer into the Marketplace Co-Op, a store which is already among my favorites in all of WDW property. You can walk freely throughout every store in the Marketplace C0-Op and make all your purchases at one store when you are ready to check-out. The Centerpiece drew me in like a Death Star tractor beam and was blown away seeing items for the Little Orange Bird,  Dole Whip, Mr. Toad’s Wild Ride, and the Jungle Cruise.

There are cups, coffee mugs, and plates featuring vintage art from Adventureland, the Haunted Mansion, Frontierland and more. you want a glass with Aloha Isle on it? Here’s where you come.

I believe the the middle section of the Marketplace C0-Op rotates to feature different products, and when I was there it was spotlight several items from the WonderGround Gallery out in Anaheim.  This was  a great surprise to me because some of the items featured artwork from one of my favorite artists, J. Scott Campbell (Spider-Man, Danger Girl, and one of the best cover artists working in comics today.) I loved this piece featuring nine Disney princesses, and think the Rapunzel hair running down the entire side is a terrific touch.

The Co-Op was also offering this  Tinker Bell piece.

Both the princess print and Tinker Bell one were also offered as coffee mugs, magnets, and smaller sized prints. The princess magnet featuring below is actually nine small magnets which you can keep together like the print or separate.

The artist Jasmine Becket-Griffith also had pieces of artwork available, including this one inspired Beauty & the Beast. Jasmine also has several prints available at the Pop Gallery in Downtown Disney’s West Side that we covered in Part One. Very talented.

D-Tech on Demand offered pretty much any Disney character to be “rapid printed” on a case and you could  also customize one by putting your name on it. I’m not exactly sure how many choices there were, but it seemed like thousands. There were almost a dozen for Frozen alone. This is available for iPhone 4/4S, iPhone 5/5S, iPhone 5C, Samsung Galaxy SIII and Samsung Galaxy S4 phones.

I went back and purchased all my items at The Centerpiece and noticed the awesome signage they have available behind the counter. I wanted pretty much every one for the Man Cave. There was a Gaston’s Tavern sign available for $65, but Tony’s Town Square, Frontierland, the Enchanted Tiki Room, Aloha Isle and Disneyland were all $150 each. These were extremely high quality.

And then there was this. For $150. Whoever purchases it should immediately be put on some sort of watch list for all of our safety.

Okay, let’s end our trip by taking a quick walk through the Art of Disney store. This has always been one of my favorite places to browse in while at Downtown Disney because of the wide array of really cool artwork. The first “Hatbox Ghost” piece comes from artist Kevin John. I love this style of art, where the characters seem to “drip down” the canvas.

Call me a sap, but I think I have loved just about every single Disney piece from Thomas Kinkade. This Rapunzel canvas is fantastic and I bought a Disney calendar last year because of how much I loved the Lion King one.

I thought this Rapunzel piece by William Silvers was striking.

You use any character from the Disney Afternoon and I’m probably going to want to buy it, but especially Scrooge McDuck.

Sometimes I think they create mash-ups just for me.

Great homage to the Disney film 20,000 Leagues Under the Sea.

This Disney/Star Wars piece stuck out to me because I had just seen the original drawing it was based on by artists Drew Struzan.

I love the retro style of this Radiator Springs Racers print.

I’m a huge fan of park maps, and was blown away by this Old Tyme Magic Kingdom piece.

There is generally an artist working inside the Art of Disney doing sketches. There is a huge book of characters to choose from. While I was there the artist was working on a piece but next time I will ask if the samples in the book are the only ones they will do or if I said “I’d like three of the Beagle Boys,” if they could do it.

I guess I can see the pros and cons of having pre selected sketches, but I can’t imagine any real artist enjoying losing all forms of creativity with that type of system. One last item before we leave the Art of Disney is this golf plated opening day Magic Kingdom ticket book. Actually I’m not even sure if it’s gold plated, it could just be gold looking. This was $150.

That’s it for now. We’ll be back in the coming weeks with another look at Downtown Disney featuring updates on new merchandise, the parking garage, Disney Springs locations and more. If you have any requests, post them in the comments below. While you are waiting, feel free to check out our monthly photo reports of the Disney Outlet Store in The Magic, The Memories, and Merch! along with the most recent SATURDAY SIX featuring Six Reasons to Visit Downtown Disney in its Current State. 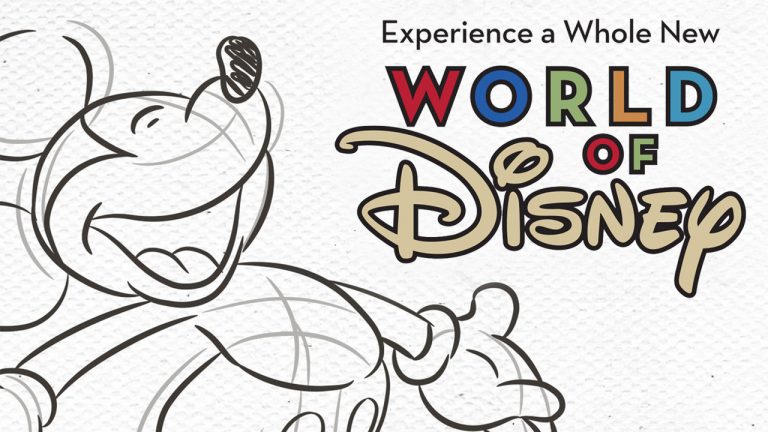