Despite copious planning with packing lists, it’s all but inevitable that mishaps will occur when traveling. Little Billy gets a fever during your trip and you neglected to bring the Children’s Tylenol. You thought you husband was packing toothpaste and he thought you were, so now you have none. You accidentally left your sunscreen at the pool yesterday and are now about to be burned to a crisp by the thousand degree sun. All of these problems are easy to solve at Walt Disney World and on Disney Cruise Line. (Disneyland’s close proximity to the external world makes access to replacement items less of an issue there.) The ship and hotel gift shops are well stocked, with most categories of personal care items represented. So while you won’t be totally left in the lurch in any of the above situations, you will likely pay a premium purchasing these personal care basics at a Disney location rather than at home. But how much of a premium will you be pay? Let’s investigate…

To figure out the Disney premium, I did spot checking of identical items at Walt Disney World and Disney Cruise Line (pricing is uniform for both) and then priced the exact same items at my local New York metro Target store. I did not consider special promotional pricing or coupons when reporting pricing here, nor did I consider tax in any equation.

Take the toothpaste example above; buying a travel size (.85 oz) tube of Crest at your WDW resort will cost $1.95, buying the same tube at Target will cost $1.49, a 23% difference. Obviously if you’ve plunked down thousands of dollars for a vacation and you need toothpaste, a 46 cent price difference is not going to dissuade you from making a purchase, but knowing the “vacation markup” can help inform your packing choices.

In some cases, the Disney markup is more reasonable. Dramamine, a true necessity for me when cruising, is priced at $5.95 at WDW/DCL and $5.29 at Target, a difference of just 11%.

In other instances, the Disney markup is considerably greater. An 8 oz. Coppertone Kids SPF 50 is $13.95 at WDW/DCL and $8.99 for a single bottle at my Target, a 35% increase. There were further economies at Target when purchasing multipacks, which would bring down the price per bottle even further. This five dollar difference probably won’t make or break your vacation. However, if you’ve got several items like that on your packing list, the cumulative price difference between bringing from home and buying on site might be enough to pay for the checked bag you’d need to get the standard-size sunscreen through TSA at the airport.

Overall, I found a wide variation on the mark up for individual items, with the average being about 36% in my sample survey. Even if you’re generally OK with ignoring prices on vacation, there are a few areas where you may want to take a second look.

Diapers are an area of high markup with the potential to have a big hit to your bottom line. (Diapers — bottom, sorry.) Currently, a 12-count package of basic size 4 Huggies costs $8.95 at the Disney gift shops. The same diapers were $8.99 at Target, but for a 24-count package. That’s about a 100% increase. If you were to use coupons or purchase in bulk, the savings at home vs. Disney could be significantly greater. Over the course of a week-long vacation, the savings from non-Disney diaper purchases alone could be enough to fund several meals for the entire family.

Of course if you have an emergency need for diapers, you’re not going to worry about the price, but if you’re traveling with infants you’ll want to have other options rather than relying on Disney for your main diaper supply. Pack your own (again, you’ll easily recoup your costs, even if you have to check an extra bag), shop “off-campus” in Orlando, ship a box to yourself, or depending on your other vacation needs, use a service like GardenGrocer.com or TurnerDrug.com if you’re vacationing at Walt Disney World, or BabiesTravelLite.com if you’re cruising. Another area with significant markup issues is single dose packets of common over-the-counter medicines. A paper packet of two 200 mg Advil tablets retails for $2.45 at Disney, while a 20 count bottle of an equivalent product (Advil liquigels) costs $5.95 at Disney and $3.99 at Target. Also of note, is that the Disney parks first aid centers will give you one or two packets of generic ibuprofen for free. Markups are similar for other single dose packets.

Choosing single dose packets clearly is a financial no-no, but there are sometimes instances where you may want the convenience of a small packet. I like to keep a dose or two each of Tylenol and Immodium in my purse or pocket whenever I travel. Of course I could purchase the econo-size bottle of Tylenol at Costco on the cheap and throw a few tablets in a ziploc, but sometimes this is messy. If you travel a lot and find single-dose packets helpful, try shopping for these in bulk at Staples or on Amazon.

Another great resource for travel-size and single dose packages is the website minimus.biz. The Advil packet that Disney sells for $2.45 is available on minimus for 61 cents. A travel size Crest toothpaste that’s $1.95 at Disney and $1.49 at Target is only 76 cents at minimus. Of course you’ll need to factor in shipping costs, but if you’re a frequent traveler it’s fairly easy to make the math work.

Only you can make the call about the right balance for your family about obsessively packing for every possible eventuality versus making do and buying on the fly when the need hits. You can get most of what you’ll absolutely need for toiletries and sundries at your Disney hotel, but you will be paying a premium to rely on the gift shop.

Tips for Bringing an Infant to Walt Disney World

Get to Know the Disney World Baby Care Centers 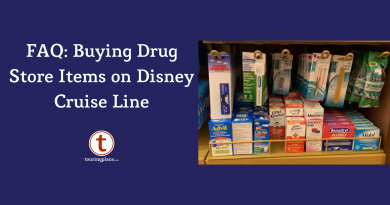 9 thoughts on “How Much Do Toiletries and Sundries Cost at Disney?”