It has been a big week for Downtown Disney (soon to be rebranded as Disney Springs) with the news of two new dining venues coming to the area, including one from celebrated Iron Chef Masaharu Morimoto. A lot of progress has been made since our last photo report of WDW’s shopping district, and today you’ll be able to get a look at two new kiosks that have recently opened (Set the Bar and Sublime) along with updates on the Food Truck Park, the bridge across Village Lake, and new merchandise at the stores.

Our first look is at the status of the much needed West Side parking garage. This garage is huge and stretches all the way from DisneyQuest to Pleasure Island. The scheduled opening date is Spring 2015.

It appears that a ramp will be coming off the parking garage and connecting to an exit off I-4. There are these large poles leading away from the garage and there are more farther down the road. This particular construction has made driving to Downtown Disney worse than ever. I used to take I-4 and get off at the exit leading to SR 535 and take Hotel Plaza Blvd to Downtown Disney. I stopped doing that about four months ago because of the traffic and have been taking the long way, circling around the property and taking the I-4 exit which would lead you to ESPN Wide World of Sports and Disney’s Art of Animation Resort. This has also become a challenge because of the construction related to the new dedicated ramp for I-4. My next option will be to parachute into Downtown Disney from above.

I recently did the runDisney Castaway Cay 5K, and I believe the walk from my car in the Downtown Disney parking lot to the West Side was actually longer. So, I started the day off with a quick bite at Wetzel’s Pretzels.

Always been a big fan of soft pretzels at places like Auntie Anne’s at the local mall or even the theme parks, but I figured I would try something different and get the Pretzel Bitz. These were small pieces of soft pretzels (available in buttered or cinnamon-sugar) that I actually really enjoyed. I will probably try the cinnamon-sugar version next time. Having the bag of smaller pieces is easier to carry around, and I also don’t have the problem of a bunch of salt falling off everywhere while eating them.

Wetzel’s Pretzels borders DisneyQuest, and when I turned the corner to begin my Downtown Disney journey I came across some incredible ads for the arcade. The ads have Toy Story characters and Darth Vader looking at 8-bit versions of popular games (Donkey Kong, Galaga, Super Mario Bros) redone into Toy Story and Star Wars versions. If these games were actually in DisneyQuest, I would have absolutely no problem paying the $50 to get in.

Next up is a quick overview of Curl by Sammy Duval, which is located in-between Fit 2 Run and Splitsville. Basically it’s a surf store where you can pick up clothing, sunglasses, backpacks, etc. Major brands include Hurley, Billabong, Quicksilver, and Oakley.

Here are some photos from inside.

Right past Splitsville and in front of the AMC movie theaters is an elevated train track structure that will blend in with the upcoming Food Truck Park area down the street.

Speaking of the Food Truck Park, it is still under construction, and I didn’t notice many changes in the overhead structure.

One thing I did notice is that the signs now say “Coming Fall 2014.”

I had to go back to the archives for this, but on an earlier trip these signs said “Coming summer 2014.” The fact that this is taking so long is truly one of the greatest mysteries in life.

Across from the Food Truck Park area in D-Street has the store becoming more and more populated with Marvel items.

There is also a large amount of Star Wars products. I will leave it for you to decide if this Princess Leia-as-Mona Lisa shirt is representing the good stuff or an example of the dangers of When Licensing Runs Amok.

At the end of the West Side is this area which leads to Planet Hollywood. I love it because it reminds of the labyrinth at the end of Harry Potter and the Goblet of Fire, except twice as scary.

Here is the other end of the massive parking garage.

Turning around, this kiosk next to the Characters in Flight hot air balloon has now be converted over to only selling Big Hero 6 items.

At the other end of the walkway around Pleasure Island is the current status of what will be The Boathouse.

Directly across from Paradiso 37, another structure is taking shape.

One thing I really enjoy about Downtown Disney is the amount of unique photo-ops throughout. This one next to Raglan Road features a larger-than-life man sitting on a bench.

Made a quick stop at the Hole in the Wall bar to get a drink. You’ll see I got photobombed by the Characters In Flight hot air balloon.

I asked the bartender for a Miller Lite; once I regained consciousness, I went with his recommendation of a Sierra Nevada Pale Ale.

Directly in front of Fulton’s Crab House are two new kiosks. The first is called Set the Bar, selling various alcohol related items (coasters, wine glass charms, beer pong supplies, etc.). The day I went was the third day of its soft opening, and it seemed like there were 10 employees working in this small space. They were here just to get the store ready, and regular staffing will probably be in place by the time you read this or by the end of the week. Because there were so many employees working at both locations, it became impossible for me to get shots without people in them. I tried, Dear Reader, oh how I tried.

The other kiosk is called Sublime, and I can not get a straight answer from anyone on how to describe what this store sells. The recurring word I keep hearing is “gifts.” What store doesn’t qualify as selling gifts?! I’m no better, after hours of thinking about it. The only word I have to describe the various items is “stuff.”

Here’s another popular photo-op near the LEGO Store.

Speaking of the LEGO Store, the construction walls surrounding it have finally been adjusted to allow guests to walk by the front rather than being herded around the back.

Across from the LEGO Store is this look, showing the status of the bridge being constructed across Village Lake.

Here’s a picture of the bridge from the other side. I’m not sure why this bridge exists, because it allows guests to walk by all the shopping in the Marketplace. Imagine if a theme park ride gave you two choices: 1) Exit through the gift shop or 2) Quick exit bypassing the gift shop. How many would choose the latter? it makes me think this bridge is going to have a lot of food and merchandise carts on it to make up for that.

Let’s continue past the LEGE Store and head into the World of Disney to see some new items (or at least new to me). I actually like this one with the Disney hats, although I suspect we’ll see it at the Disney Outlet Stores sooner than later.

I bought these Prince and Princess shirts for Len Testa and Laurel Stewart to wear for the Christmas card photos.

Two new plates arrived with some INCREDIBLE artwork on them. If this is a taste of the “Disney Parks 2015” artwork, I’m in.

These Haunted Mansion-inspired hour glasses were pretty cool. $32.95 each.

At the exit of the World of Disney, the Pirates of the Caribbean display has been replaced with this incredible generic luggage one. This is at the door of the “boys” room that has action figures, Cars items, Star Wars toys, etc.

Maybe someone complained that the old set-up was too scary? It’s an odd choice because this room doesn’t even sell luggage, and you could have had a display featuring a wide variety of characters, including Monsters, Inc., Toy Story, and Marvel. Add this one to the Great Unanswered Mysteries column.

Over at Ghiradelli I got a picture of the free sample they give out. It’s possibly the world’s smallest piece of chocolate, but it does taste great.

Here’s a a look at some items in the Tren-D store, geared towards women.

Loved the Edna Mode reference by the dressing rooms.

In the Once Upon a Toy store I saw these absurdly large erasers. These have been popping up all over property, although I’m not sure who would want them. People that actually use erasers would want something more practical, and wouldn’t kids immediately be drawn to chewing on them?

Here is a great photo-op that is behind the Disney’s Days of Christmas store.

Here are some pictures of the holiday plush that is available inside the Christmas store, including this Minnie Mouse holding a Duffy the Disney bear. If only that Duffy bear could himself be holding a Stitch doll. THAT I would have bought.

Across from the Disney’s Days of Christmas store is the building housing the Art of Disney and the Design-A-Tee store, which has this photo-op in front of it.

I’ve said before that I think every trip to Downtown Disney should include a walk through the Art of Disney, and this time I took at look at some of the sketches available.

Because it was October, there were plenty of Haunted Mansion-inspired pieces around the store, including this wonderful sign.

I closed my day meeting ace photographer Brandon Glover for a meal over at The Smokehouse, which you can read about by clicking here. My plan is to document each dining venue at Downtown Disney right before everything changes at Disney Springs (I never said it was a good plan). Next month should see the debut of the first iPhone 6 cases at Downtown Disney, and maybe, just maybe, I’ll figure out a way to describe what Sublime sells. See you then! – Derek

15 Iconic Photos You Must Take At Disney World 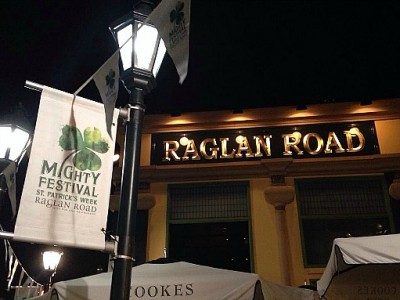