Today, the Wall Street Journal gave us a first glimpse at what we can expect with the upcoming Frozen attraction, called Frozen Ever After, slated to hit Epcot’s Norway Pavilion sometime next year.

The goal of the attraction is to “try to take you back to the movie, without retelling the story,” said Imagineering Creative Executive, Kathy Mangum.

The attraction is set to take place during the Winter Festival (which takes place in the summer), when the residents of Arendelle celebrate their favorite time of the year.

Here is what guests will experience in the upcoming attraction:

First, the Maelstrom attraction building has been gutted to make way for Frozen Ever After; however, the ride path will remain the same.

As far as the attraction goes, the queue will have guests walk past Wandering Oaken’s Trading Post. Guests may even catch a glimpse of him, and you can bet you may hear Yoo-hoo a few times!

From there, guests will board Viking ships, which remain from Maelstrom. Guests will then float through the first scene, which features Olaf and Sven setting up for the Festival. The second scene will feature Troll Valley, where Grandpappy Troll shares the story of how Anna and Kristoff met.

The vehicle will then make its way up a ramp where guests come across Olaf singing and ice skating. This scene will also feature Anna, Kristoff, and Sven.

After that, you’ll finally get to the most famous scene from the movie. Here, Elsa will be seen singing “Let It Go” in her ice castle. Also, Elsa may be causing it to snow!

In the next section, we’ll get to visit Marshmallow, as well as the snowgies featured in Frozen Fever. Oh, and even Marshmallow can’t “Let It Go”.

To get through the final scene, you’ll go through a mist cloud. The finale will feature a farewell from Anna, Elsa, Kristoff, Olaf, and Sven, and yes, fireworks are going to be involved.

A few additional notes to keep in mind about the new attraction:

In addition, the meet and greet with Anna and Elsa will be called the Royal Sommerhus and will feature a design that will reflect the culture of Norway.

While there has been no official opening date announced for the attraction, it is expected to open in the Spring of 2016. 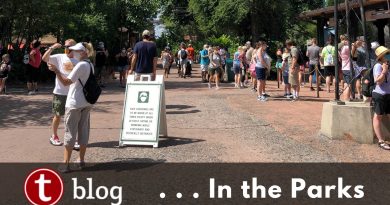