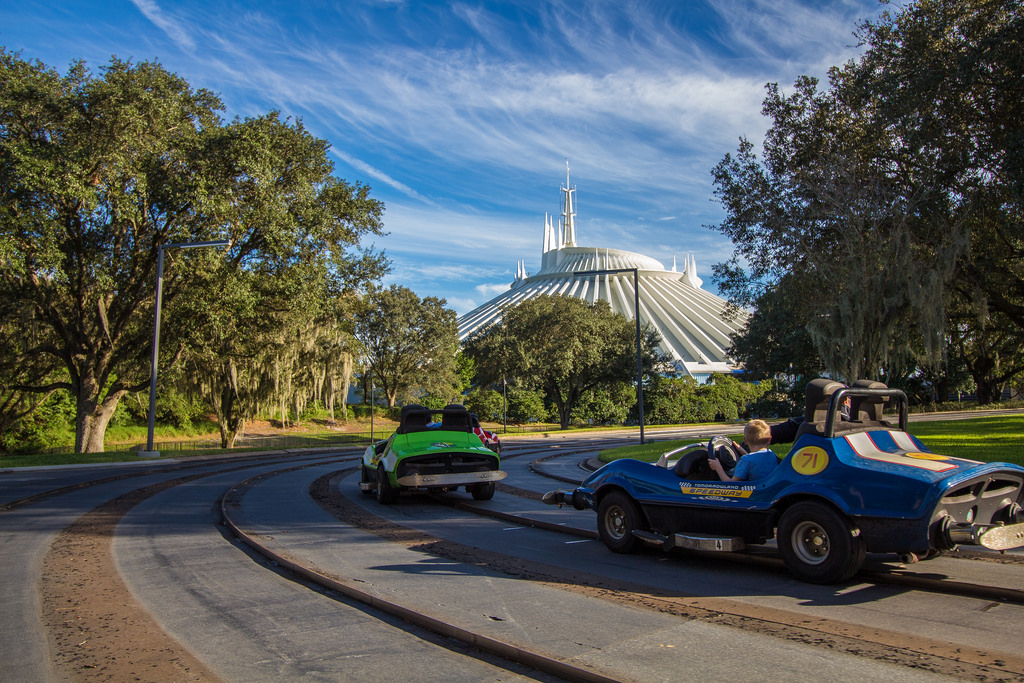 This week’s SATURDAY SIX takes a look at TOMORROWLAND in Disney’s Magic Kingdom! The most popular theme park in the word has several well defined lands. Among them is the most rootinest tootinest land in the wild west with Frontierland. Main Street, U.S.A., brings to life a turn-of-the-20th-century small town American thoroughfare, complete with barbershop, emporium, and horse-drawn trolley. Fantasyland brings animated classics to life. Then there is Tomorrowland. Once a tribute to possible adventures in a distant future, over time the land has become more of an Island of Mistfit Toys; featuring a hodgepodge of attractions that have nothing to do with each other or – more importantly – the future.

That said, while the theme is a hot mess, the collection of attractions in Tomorrowland rival those found in any land from any theme park in the world. It has hands-down the funniest attraction in all of Walt Disney World, one of the best coasters Disney has ever made, and two attractions that Walt Disney himself was personally involved in creating (both of which they don’t have out in Disneyland.) Today we’re going to look at our favorite parts of Tomorrowland, and let’s kickoff the countdown with…

If I were to list out my personal favorite rides at Walt Disney World, the PeopleMover would make my Top 6 list, and it moves up higher and higher on my depth chart every single year. Generally a walk-on (how often do you get to say that anymore,) the PeopleMover is a  leisurely paced ride where guests get to ride all over Tomorrowland including around – and even through – the attractions. The PeopleMover is a respite from a hot day of touring the parks, allowing guests to catch their breath (and – at times – their sanity) while also giving some unique and picturesque views of the park. During this tour of Tomorrowland be sure to keep your eyes open for the concept model of Progress City (an idea which eventually evolved into our Epcot of today) and your ears open for the iconic “Paging Mr. Morrow. Mr. Tom Morrow” as you pass through Space Mountain.

In a world becoming increasingly filled with hybrids, the gas-guzzling race cars of the Tomorrowland Speedway seem completely out of date, but good luck telling that to your youngster as they get to drive their own vehicle around a miniature track. Each car’s speed is about 5 MPH (which is 3 MPH faster than most of the cars traveling on Orlando’s I-4) and the cars are guided along the track so the vehicles can not get off course. While the lines can be long, the kids love it. While the adults may be driven mad by the slow moving vehicle and the jerky turns, there is something to be said about the sprawling track and the overall view you get of the park. Why are the cars still using gas? Why hasn’t the ride been re-themed to the mega popular Cars franchise? Why don’t we have more visual entertainment on the track like they do out in Disneyland? You may come away with more questions than answers when riding the Speedway, but it won’t change the smile on your youngster’s face one bit as they put the “pedal to the metal.”

The current buzzword in theme parks is “interactive” and Space Ranger Spin allows families to compete with each other shooting targets in an environment themed around Toy Story’s Buzz Lightyear. The attraction shows its age when compared to Toy Story Mania, but there is still a lot of fun to be had for kids and adults, especially if you’re competing against each other. Guests also get to control the actual ride vehicle, adding an extra element to the gameplay.

Located outside Space Ranger Spin is the Buzz Lightyear meet and greet. This is one of our family’s favorite, and while Buzz’s autograph is a stamp, we did have a special experience when we brought a book of Disney characters for him to sign.

We here at the SATURDAY SIX consider the Laugh Floor to be one of the most underrated attractions in all of Walt Disney World. First of all, guests get to sit in an air conditioned theater set-up like a Monstropolis comedy club (you had us at air-conditioned.) The show itself then uses the same technology as Epcot’s Turtle Talk with Crush, along  animated characters on-screen to interact in real time with the audience. There’s even an opportunity for guests to submit their own jokes into the show. The comedy is all family-friendly, and the “monsters” never fail to get the entire audience laughing. The queue has a lot of fun details that many guests overlook, so be sure to keep your head on a swivel while waiting for the next show to start.

For years, aging professional wrestler Ric Flair would describe himself as Space Mountain. Flair would say, “it may be the oldest ride in the park, but it still has the longest line! WOOOOOOOOO!” While Space Mountain may not technically have the longest line in the Magic Kingdom today (we’re looking in your direction Seven Dwarfs Mine Train,) it remains one of the most popular thrill rides on property. With one of the most iconic facades in all of Walt Disney World, Space Mountain is pure Disney magic. Imagineers took a relatively simple Wild Mouse ride system that we’ve all ridden a thousand times before at local carnivals, put it inside the iconic mountain, and immediately made the attraction 10 times more thrilling and memorable than all of its contemporaries. While the ride itself doesn’t come anywhere near approaching the speed of rides like Rock ‘n’ Roller Coaster or Expedition Everest, it feels much faster than it really is because of the environment you’re zipping through along with the accompanying lighting effects and sound design. What Splash Mountain is for log-flume rides, Space Mountain is for Wild Mouse rides.

On rare occasions, guests on the PeopleMover get the opportunity to drive through Space Mountain with the lights on.

“There’s a great big, beautiful, tomorrow. Just a dream away.”

Created originally for the 1964 World’s Fair, Walt Disney’s Carousel of Progress is a four-act play offering guests a nostalgic look at how the lives of families living in the 20th century were affected by the changes of electricity and technology. Guests sit in a theater that rotates through the four scenes. With Walt Disney’s trademark optimism of a better future, Carousel of Progress uses animatronics and old-school theater “tricks” to tell its story. The first scene is set around the turn-of-the-century 1900s, while later scenes take place in the 1920s and 1940s. The last scene takes place in what the ride speculated the near-future would be, but because technology changes now at such a rapid pace, the scene almost plays like an episode of The Flintstones. On a serious note, Carousel of Progress is a must-do, with a charm about it that only exists in the rarest of attractions. This is the type of experience that separates the Disney parks from everyone else. It’s edu-tainment done right, a history lesson with humor and heart.

Astro Orbiter has several elements that would make it one of the best attractions in all of Tomorrowland. It’s visually stunning and gives an absolutely incredible birds-eye view of the park. However, the ride is insanely slow-loading (complete with using an actual elevator to get to the loading platform.) Astro Orbiter’s cramped spaceships will make you long for the spacious leg room in what you previously thought were cramped experiences like Mine Train or Splash Mountain. Many guests can’t even fit into the spaceships, a fact they don’t learn until after the interminable wait in line.

All that said, you can get some pretty cool photos on Astro Orbiter…

The animatronic crooner of Cosmic Ray’s Starlight Cafe, Sonny Eclipse is an intergalactic lounge lizard who plays songs for guests on his astro organ. Let’s face it, you’re not going to Cosmic Ray’s for the high quality food, but you should go for the musical stylings of Sonny as he entertains guests with his version of space jazz for a near 30 minute set.

So there you have it: Six Reasons We Love TOMORROWLAND in Disney’s Magic Kingdom! See you next weekend for the latest installment of the SATURDAY SIX, where we’ll look at something fun from the world of Disney and Universal. If you enjoyed yourself, be sure to check out The Magic, The Memories, and Merch! articles, or, for your listening pleasure, check out the E-Ticket Report podcast. You can also follow Your Humble Author on Twitter (@derekburgan).

Special Thanks to crack staff photographer Brandon Glover, photo wunderkind Mike Sperduto, Dynamite Daisy Lauren, Disney photography ICON Tom Bricker of the must-read Disney Tourist Blog, the only person who runs at site with bandwith issues occurring when a new hippo is born at Animal Kingdom Tim Grassey, hot shot Michael Carelli, Sweet Sarah Graffam, and blogger to the stars Megan Stump for their invaluable assistance with this article. Be sure to also check out Brandon on The Park Blogger podcast with goofballs co-hosts Aengus Mackenzie and LitemAndHyde , while fellow Potterheads may enjoy Meg’s work on the Central Florida Slug Club. 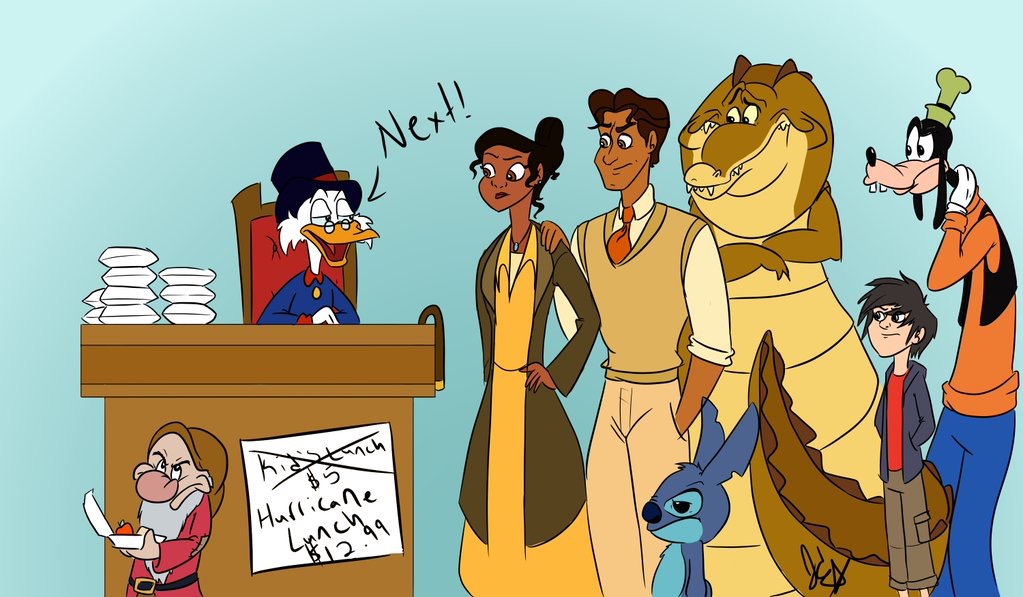