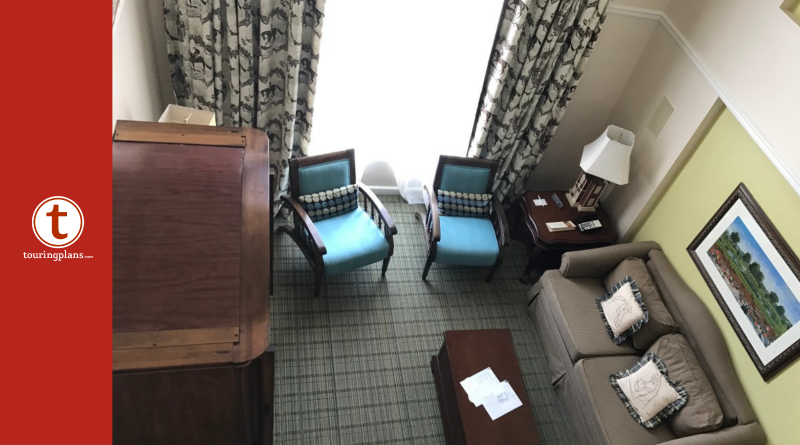 The largest hotel rooms on Walt Disney World property are the Grand Villas, three bedroom units that sleep up to 12 guests, plus a child under age three in a pack ‘n play crib. The guests are accommodated on one king-size bed in bedroom A, two queen-sized beds in bedroom B, and two queen-sized beds in bedroom C, plus a pull-down sofa bed in the living room. That’s 12 people on six sleep surfaces; obviously if you have members of your party that can’t share a bed or who don’t want to sleep on a sofa bed, then the real capacity of the room goes down for you. Most Grand Villas occupy two levels, with the common living areas and the master bedroom downstairs and two bedrooms upstairs.

In addition to the bedrooms and living room, the Grand Villas all have a full kitchen, at least three bathrooms, a washer/dryer, and a dining area.

For an idea about what to expect from a Grand Villa, here’s a photo tour of a three-bedroom unit at Saratoga Springs. This unit was in the Congress Park section of the resort, with some rooms having views of Disney Springs.

There is plenty of space for a large group to stay together and socialize, but not be in each other’s faces. If you’re planning a family reunion, this could be a great option.

What are your thoughts about the Grand Villas? Have you stayed in one before? Let us know in the comments.

Would You Rather: Disney Vacation Club Edition