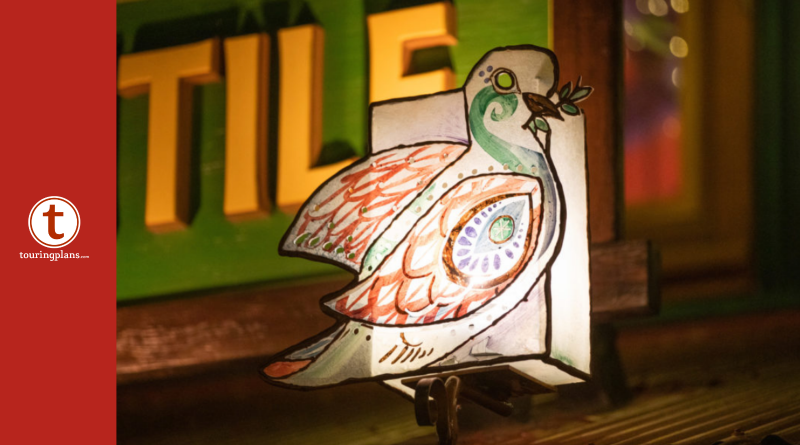 Now that all the Disney theme parks are in full swing of their holiday celebrations, it’s time to consider which one does it best. Picking a clear favorite of the four Disney theme parks during the holidays is tough. Magic Kingdom is classic holiday fun at its best. Epcot brings the world together and celebrates the holiday traditions of the world around us. Disney’s Hollywood Studios brings the glitz and glamour of this season. But this year Disney’s Animal Kingdom roared into the holidays with unique interpretations of the most wonderful time of the year. It is untraditional. At times it is a little tacky. Much of the decor and holiday enhancements are over-the-top. And it couldn’t make me any jollier. Here’s what’s so great about Disney’s Animal Kingdom holiday festivities.

When I first witnessed the Merry Menagerie on Discovery Island, the park’s central hub, it made me giddy. I giggled with delighted. My toddler son watched puppets of cold weather animals waddle by.

The puppeteers brought life to the animals as they interacted with guests of all ages and backgrounds. It is special that little kids can see these puppets up close, on their level, and even touch them. So much at Disney is hands off, don’t touch, but not these delightful puppets.

After taking tons of pictures, I stepped to the side and sat on a nearby wall. It delighted me to watch countless guests be in awe of this interaction and have fun with it too. The performances are intermittent from 10:00 a.m. – 5:00 p.m. daily. I recommend enjoying a performance in the late afternoon as dusk approaches.

The glowing decorations and luminaries inspired by the wintry animals of the Merry Menagerie make Discovery Island all the more magical. Yet, there’s one more touch that makes the holiday celebration at Disney’s Animal Kingdom even more unique. Handmade snowflakes are woven into the decorations throughout Discovery Island, the park’s hub. Members of Augusta Training Shop, based in Augusta, Georgia made these snowflakes. This group employs adults with cognitive and physical disabilities so that they can acquire skills and talents, and become more self sufficient. The saying goes that “no two snowflakes are alike” and these snowflakes are some of the most beautiful you will ever see, in more ways than one.

It is as strange as it sounds: holiday decorations inside a land that represents an alien planet. The good news is the decor is limited to the Pongu Pongu snack and refreshment stand. The better news it is tacky and weird, but actually fits once you think about the storyline. Expatriated earthlings settled this outpost and snack stand, and somehow happened to have a few holiday decorations with them when they transported to Pandora. It’s a stretch, but the fun is in the details.

Go to the window between the two openings at which you place and receive your order. You’ll spy some classic Christmas decorations, but also a few menorah. And up above the window is a Na’vi Nutcracker. These decorations are completely unnecessary, but they bring a holly jolly touch to Animal Kingdom’s newest land. And this year every land inside the park has at least a few decorations. I love it!

The trail is decked out for the holidays. As you visit Daisy and the Chipmunks you’ll stroll along a brightly decorated pathway. Both character locations are decorated as well, plus there’s a Reindeerasaurus at the end. There’s some great photo opportunities right here.

Near Restaurantosarous, which entrance is decked out in Christmas lights, there are two meet and greet locations that make for festive photos especially at night. Launchpad McQuack and Uncle Scrooge’s locations are both “ducked” out for the holidays. Their Christmas lights shine bright and make your photos holly and jolly. I’m using the Photopass photos from the Dinoland character meet and greets as our Christmas card this year! 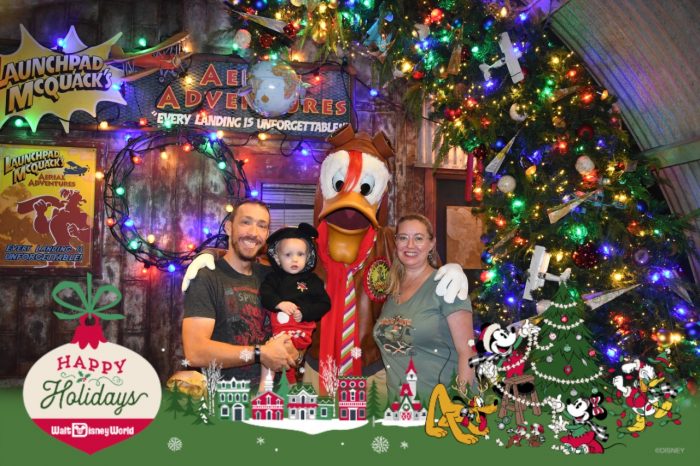 Tree of Life Awakenings with a holiday touch

Dazzling enough on its own, the Tree of Life Awakenings minishows are worth stopping and enjoying. For the holidays the minshows have holiday touches and themes. Some of the animals from the Merry Menagerie are featured bringing this motif full circle. While the other theme parks have extravagant nighttime shows, this nighttime display is intimate yet awe-inspiring. It is the perfect way to end a visit to Disney’s Animal Kingdom during the most wonderful time of the year.

Have you visited Animal Kingdom for the holiday season or are you planning to go? What do you think is most appealing for you? Let us know in the comments.