Hello, everyone! I’ve emerged from my underground lair, carefully wending my way through months of discarded Mickey Bar boxes, broken Priceline Express links, and unsuccessful attempts to avoid stepping on my own beard.

You may be happy to know that in between tours of my daughter’s Animal Crossing island and repeated viewings of the King George portions of Hamilton, I have created something that might tickle the Disney savings portion of your brain.

If my third-grade biology knowledge is any help, I believe the savings-brain lives within the parietal lobe and also houses that reflex you have when you walk up to Aloha Isle hankering for a Dole Whip, see a long line, and pull out your mobile order app to bypass all the patiently waiting guests. In any case…

If one assumes that Disney will increase the cost of annual passes every year and one buys a fistful of Annual Passes (APs) now at the current price, would one save money?

First, lets get some quick facts out of the way.

In case you didn’t notice, Disney tends to increase ticket and/or AP prices each year. In fact, since 2000 there have only been two years where AP prices did not increase – but Disney thoughtfully made up for that with multiple increases in two other years. Most increases were within a few points of inflation, but there have been double digit increases in 3 of the last 4 years. Here is how a summary of increases looks over time. 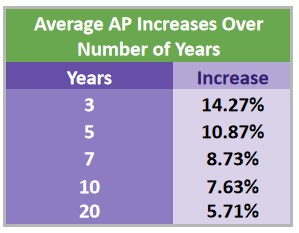 If you buy an Annual Pass voucher now, they are valid for use until the year 2030*, so you could add several passes to your long-term hoard of investable Disneyana. (I suspect they may be a better bet than a drawer full of Galaxy’s Edge sporks and Apple Dumpling Gang Tsum Tsums.)

*I am conveniently ignoring the fact due to some unusual global matters you may have heard of, APs are not on sale right this very minute. But I assume they will be at some point in the future.

If you spend a bunch of cashola on something now that you plan to use later, it is wise to take into account your opportunity cost. In this case, less money in your bank account means less money earning interest. (Although with the rates these days, interest is hardly interesting.)

Also, please remember that past price increases do not predict future ones, and please please don’t raid your 401k in the pursuit of Disney Nirvana, at least without discussing things over with your financial planner.

In these evenings of pandemic silence I have carefully crafted a spreadsheet to help model some scenarios. To begin we need to make some assumptions, then choose when and how to use the APs. 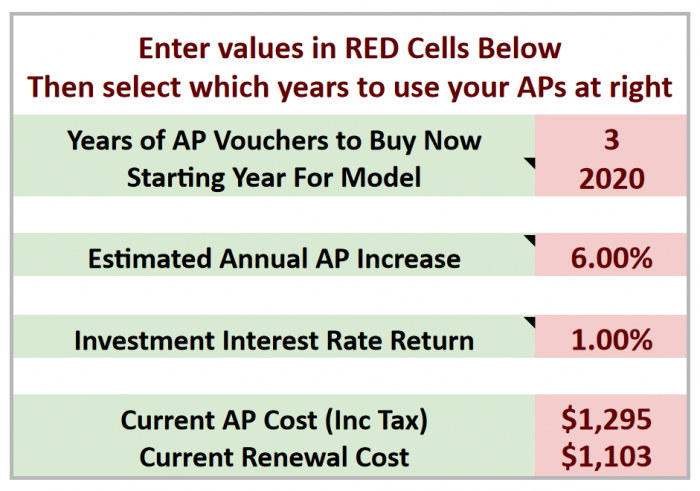 I think a modest purchase of 3 APs will be a good place to start. A 6% annual price increase seems fairly conservative as it is near at the bottom of the historical average. I also think assuming the cash we use would have earned 1% interest per year is a generous one. (By the way, did you know the average bank interest rate right now is a measly 0.1%?! Sheesh.) I think this initial combination will give us a fair idea of what we might save while not overestimating it.

Now, I’m betting some people might make the argument that Disney won’t be raising AP prices any time soon because they really need to get people in the parks. That could end up being the case – but limited travel in 2001 and a bad economy in 2008 didn’t stop them from increasing prices in following years. I’m more of the mind that there will be increases at least to cover additional costs.

One last thing: These scenarios are for one person and assume the vouchers you buy now are each used in different years later. While this tactic would of course still work if you bought multiple vouchers now and then used them all in a single year for you and your family – the calculations would be different than you see here.

Let’s take a look at how these assumptions shake out. 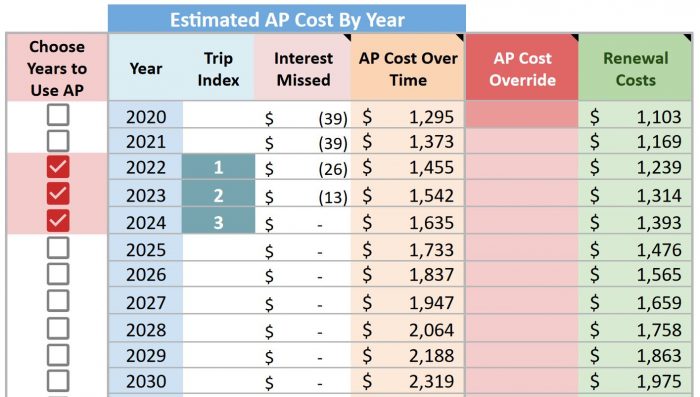 In the table above, I chose to start using the AP vouchers in 2022. In this first example, I selected sequential years so we could compare the buy-up-front tactic to simple AP renewals later. The orange and green columns show what the price of an AP or a Renewal would be in each year. The Interest Missed column tallies up returns lost by giving it all to The Mouse.

So, here’s the wrap up on this example: if we purchased 3 AP vouchers now, it would cost $3,885, cash money. (Although you could save more money by using discounted Disney gift cards to buy the vouchers!) If we instead bought these APs in the future years we plan to use them, they would have cost $4,632. If we compare the difference between the two and add in the lost interest, our tactic will have saved us $631, or 16.2% of our initial investment. Not too shabby.

However, you may have noticed an additional table at right: when the years you select to use the AP vouchers are sequential, this table will tell you whether buying 1 AP now and then simply using the renewal discount later would save you more money than buying multiple APs up front. In this particular instance, the renewal tactic would have you ahead about $26. (Which is kind of a wash in my opinion.)

Interestingly, if you pushed your first AP use off just one more year to 2023, the renewal option would no longer be ahead.

As you can see above, the longer you wait to use your AP vouchers, the more you benefit from price increases. In this case, using your first AP one year later increases the multiple AP savings to $870 and *beats* the renewal tactic by $84.

And remember folks: this is all estimated assuming a 6% annual price increase. If you instead used the 7-year average increase of 8.73%, the savings from buying multiple APs in this last scenario would jump up to $1,402.

Now, let’s up the ante: If you are like my family, we are often locked in to certain dates because of school and work schedules. Even if we planned to buy APs for multiple years, there would likely be large sections of the vacation calendar with tiny tumbleweeds blowing across them. This takes the possibility of renewals right out for us. So, what if we space out the years we use these AP vouchers?

You can see with the same initial “investment”, spreading out the use years has increased our savings to $887. (That is $256 more than the sequential use savings.) I’m beginning to think this is a viable technique. Do you?

I was talking to Len Testa about this, and he had an interesting question:

Let us know in the comments!

So, for those of you who have made it this far in the post I thought I’d share another set of AP purchase tables. Over the last 7 years annual passes have increased in price from $779 to $1,295. Ouch. 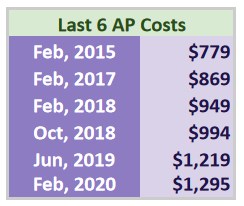 What if we had this idea back in 2015 and bought the same 3 passes, but didn’t start using them until this year? You may have noticed I had an AP Cost Override column in my spreadsheets – I can use that to start the same model back in 2015 and then enter the actual AP costs for each year.

How well would we have done?

If you know that you won’t be visiting Walt Disney World for a few years, would you consider buying Annual Passes now to save money in the future? Let us know your thoughts in the comments.