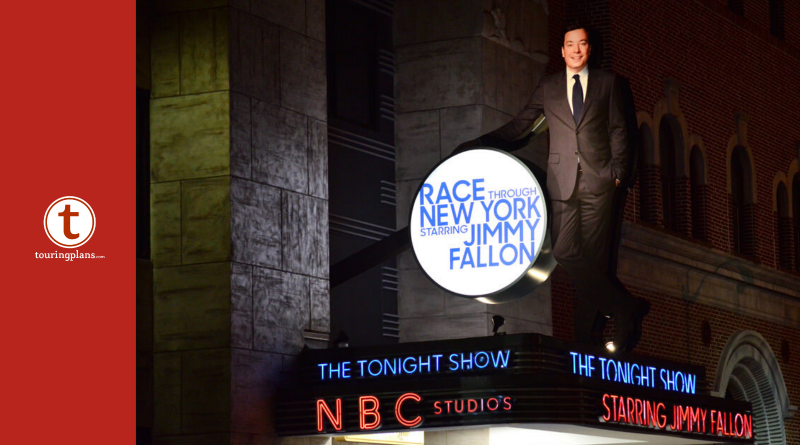 Today in Getting to Know Universal we are covering the ins and outs of Universal Studios Florida’s Race Through New York starring Jimmy Fallon. Opened on April 6, 2017, this attraction features the titular Jimmy Fallon, Tonight Show house band The Roots, and more as guests race Jimmy through New York City. This attraction replaced the dated Twister: Ride it Out special effects show, which closed in late 2015.

Race Through New York is located in the New York section of the park (shocker I know), and the exterior is themed to the famous 30 Rockefeller Plaza where The Tonight Show is filmed. Large windows replicate the NBC Studio Store in New York and a recreation of the iconic NBC marquee acts as the entrance of the attraction.

Instead of a traditional queue Race Through New York uses a Virtual Queue system. Guests use the Universal Orlando app or a kiosk (located to the right of the attraction) to select their party size and a return time to ride. The distributed return ticket features a QR code. Once the return time window is open, a Team Member at the attraction entrance will scan it for admittance.

Inside the lobby guests are handed a boarding group color; throughout the waiting areas guests will proceed based on their assigned color. Colors are called twice: once downstairs to proceed upstairs and once more upstairs to proceed to the pre-show. While waiting guests can explore exhibits, play games, watch The Ragtime Gals, or (mercifully) sit on padded benches.

In the pre-show Jimmy explains he is racing the audience through New York City on his custom Tonight Rider vehicle. Guests experience the attraction in a large motion simulator modeled after the Tonight Show theater. Unlike Star Tours the simulator is open with the race projected on the massive screen in front of the vehicle. Along the way several reoccurring characters from the show appear and guests even end up on the moon (after all, the logo has a moon in it). The attraction exits through The Tonight Shop full of Tonight Show and NBC souvenirs.

Race Through New York receives mixed reviews. Many guests praise the waiting room format and crisp projection technology. Other guests complain about this being another 3D based, motion simulator in a park with several other attractions like it.

One cannot deny the visuals are the best of this type of attraction, Industrial Light and Magic recreated New York faithfully and the 3D effect is the best in Universal Orlando. Yet your enjoyment of this attraction will vary depending on your familiarity and affinity towards Fallon’s Tonight Show. Fallon fans will love the experience while his detractors will be turned off. If you are unfamiliar with the show check out YouTube for examples of sketches that are featured in the ride. Most guests who ride without prior knowledge of Jimmy Fallon or the Tonight Show still enjoy the attraction.

Guests riding Race Through New York with Jimmy Fallon must be 40 inches tall to ride. Guests in ECVs must transfer to a wheelchair; ride vehicles are wheelchair accessible. Attraction is not recommended for guests who have a fear of enclosed spaces, are prone to motion sickness, expectant mothers, or those with physical conditions such as back and neck problems. The attraction features strobe lights and smells.

Rider Swap is offered for parties with guests under the height requirement, see a Team Member at the entrance for assistance. The Child Swap room is located at the exit of the motion simulator theaters and features clips from The Tonight Show.

According to the Touring Plans wait times page, visit Race Through New York starring Jimmy Fallon anytime during the day. Due to the use of Virtual Queue book a return time in the morning for any time in the early afternoon when waits are the longest in the park.