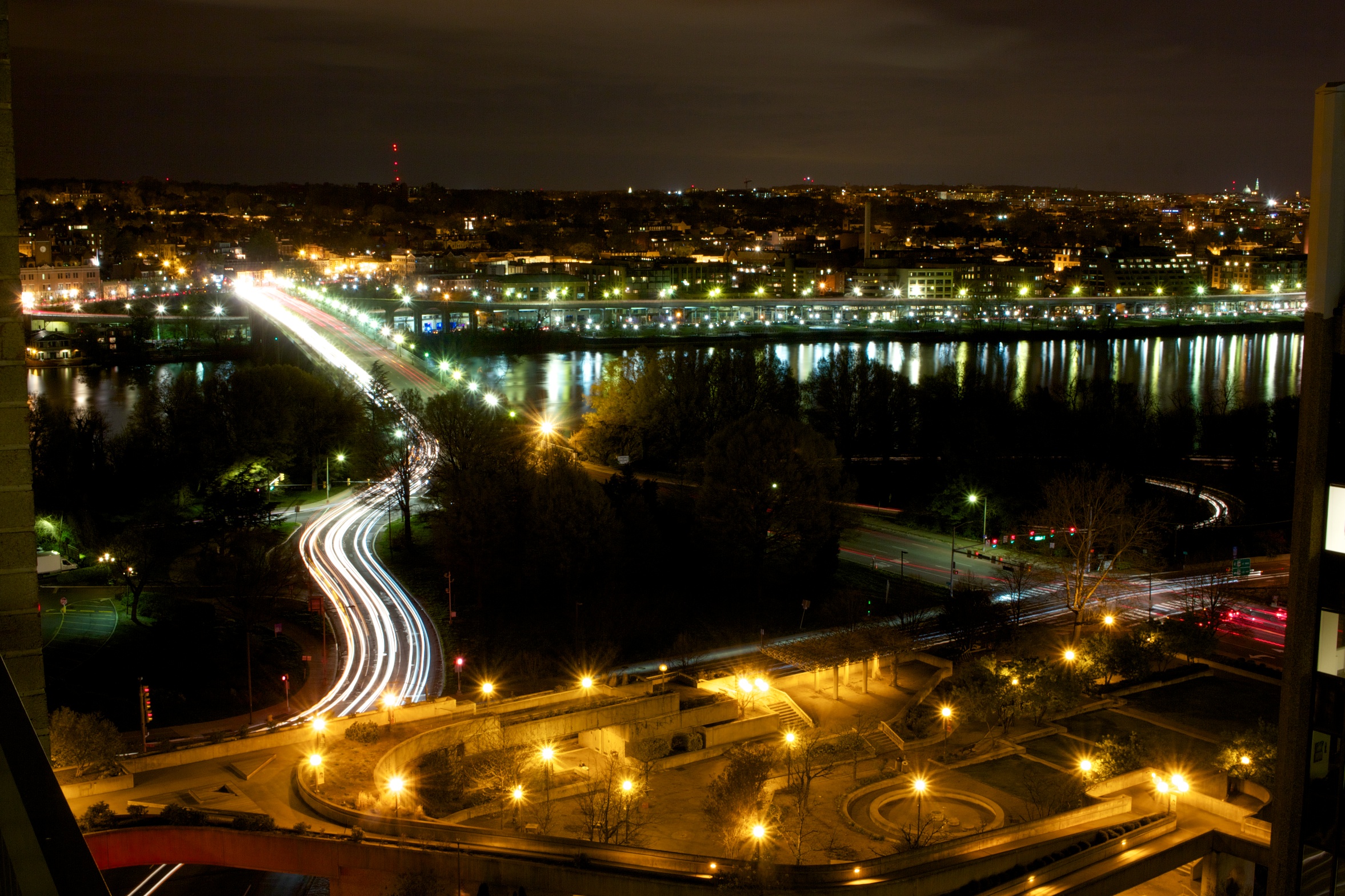 Our full coverage of Washington, D.C. will be coming in a few months (although you can read a lot of our opinions in the Unofficial Guide to Washington, D.C.). In the meantime, I thought I should answer one of the common questions about D.C.: are there any reasonably-priced hotels that won’t require inoculations?

As you’ve probably guessed by the existence of this post, the answer is yes. I have stayed at the Holiday Inn Rosslyn at Key Bridge (full name) twice in the past few months, and have come away with quite a few thoughts. One of which is that this would be a great choice for families, but only if you get it at the right price.

The location of this hotel is definitely a strength. Yes, it is not technically in Washington, nor is it technically in the same state as Washington. It is, however, as close as you can get to the tourist areas of D.C. without being in them–and paying the high cost of hotels in those areas. Briefly, the major tourist areas of Washington, D.C. are clustered around the 2 miles or so directly east of the Potomac River where the National Mall is.

This is a long-winded way of saying that you can be in the heart of the city with a mere 5 minute walk and 10 minute subway ride. That’s not bad for interstate travel.

The neighborhood is also pretty good and very safe. Directly around the hotel is mostly offices, meaning it can be a little busy during work hours and very quiet on weekends. There aren’t any fantastic dining options, but a few blocks away is a cluster of restaurants, a Safeway grocery store, and a Target. During workdays there is a line up of food trucks near the subway station.

This one has to come with a caveat because neither time did I stay in a regular room. Both trips–one by choice, one by upgrade–I was in a 2-room suite which consisted of 1 bedroom, a living room, and 1 bathroom (with a second sink outside the door). The size of these particular rooms was a huge plus, especially when I was there with my family. If you are looking at a regular room, however, the size of the suite is not important to you. The suite also has two balconies compared to one for a regular room.

The downside of the rooms is something that will carry over into the standard-sized rooms as well: wear and tear. The rooms were clean and the bedding was above-average in quality and well maintained, and those are the most important things to me. Everything else seemed to be substandard, though.

To be specific, the carpet was worn and contained fraying seams and holes; the walls had occasional nicks and holes; the drawers were loaded with strange dust and barely opened; and the thermostat may have been invented by Albert Butz directly (the inventor of the electric thermostat…according to the most minor of research). The bathroom was also pretty rough including a strange half-size frosted glass sliding door and, in one room, a sink with a small hole in it where something was clearly dropped on the porcelain. None of these things are what I would consider dealbreakers, but it doesn’t make me exactly excited about staying again.

Another part of the room that I found to be a minor annoyance is the layout. The bedroom itself was small, but with the suite that wasn’t a problem–and, from what I saw, is not a problem in the standard rooms. The living room area, though, was strange. There was a small table positioned in front of the balcony doors, which had to be moved over to use the balcony. There was a desk right next to the bedroom door, which meant that the large desk chair blocked half of the door. I appreciated the abundance of seating (there was also a couch and a comfy chair), but it seemed too much for the layout. The coffee maker was also stashed under one of the sinks…which is just a weird spot and it took me a full day to find it.

Back to positivity! There were quite a few amenities, especially for a hotel in this price range (more on that below) and some that aren’t even supplied in the most expensive places. Let’s start with parking, which can add $60 or more per day to your stay depending on the hotel. Not here. The Holiday Inn in Rosslyn not only offers onsite, covered self parking, it is absolutely, 100% free.

Another thing that isn’t always common in a D.C. hotel is a pool. When you do find one they tend to be outside–great during the humid summer, less great in February. This hotel actually has an indoor pool, which is one of the things that makes this great for families. I don’t know about you, but we always have to ask the kids “what was your favorite thing today…not counting the pool.” Yes, the pool has approximately 400% of your daily recommended value of chlorine, but once your eyes stop burning you’ll have a good time.

Finally is dining. I will admit that I never ate at the top-floor, glass-walled restaurant that surely has wonderful views across the river. I spoke to several people who ate the popular buffet breakfast there and the consensus seemed to be…meh. To a person, they each said it was good, but nothing special. What I did use (just about every day) is the in-house coffee shop. This is a conference hotel, and on the conference level they have a nice little shop that sells some baked goods, limited breakfast sandwiches, drinks, and the bitter nectar of awareness: coffee.

There is also a small fitness center if you are so inclined. I am usually not.

Crowds are a strange topic to bring up when discussing hotels, but it seems relevant at this particular hotel. It is a business/convention hotel, which means that there are often a lot of people wearing nametags walking around. I didn’t feel like they were intrusive in any way other than occasionally filling up an elevator.

Who were much more intrusive were the many busloads of school groups. On my first stay at the Holiday Inn in April, there were at least 6 large groups of high school and college age students and they were routinely in the lobby, the pool, and pretty much all over the place. That is not to say that they were behaving badly, just that they were a constant and made for a much busier feeling hotel. On my second stay in June–after school was out–I saw exactly zero groups. Again, not necessarily a dealbreaker, but something to keep in mind.

Now we come to it, what is often the most important aspect. Again, this is a positive check for this Holiday Inn. I checked the rate for a Friday and Saturday night in August, specifically August 12-14, 2016. For a flexible, cancel-able rate you would pay $130.23 per night including tax and fees for a standard, 2 double bed room. If you are willing to pay in full in advance, you can get that rate down to $115.07.

To compare it to the rate for the suite I had to go further into the future–to the weekend of January 27-29, 2017, where the rates are surprisingly higher (possibly owing to that indoor pool). For that weekend the flexible rate for a standard room is $169.86 and the advance purchase rate is $150.09. Compare that to a suite, where the flexible rate is $203.84 and the advance purchase rate is $180.10. For about 20% more you can get 100% more space. I would highly recommend that upgrade if you can manage it.

In general, the rates at this hotel tend to be a little below average for Washington, D.C. hotels we’ve looked at. For that generally reasonable price, however, you get free parking and an indoor pool. It’s a very good value.

So, will I stay here again? It depends: I didn’t love it, but if I got the right price (probably $130 or under) I would book it, especially if I wanted a reasonably priced suite and an indoor pool.