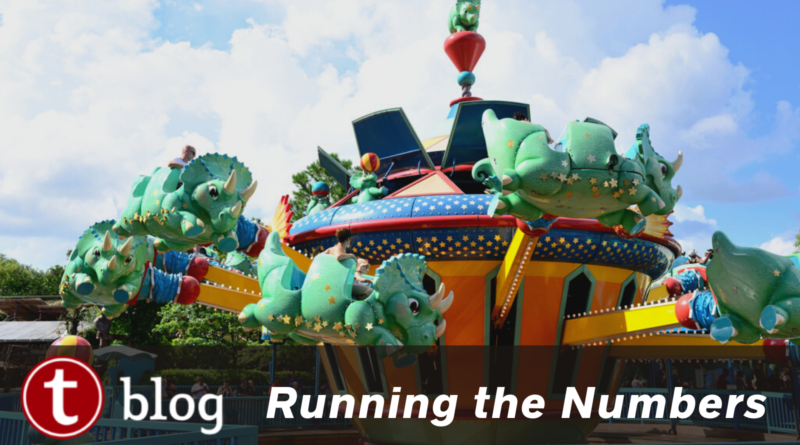 In an earlier article, I outlined a strategy for Genie+ that was based around a simple rule, and worked up a few example days with it. In this article, we’re going to dig into how that rule works a bit more. I’ll talk about where it came from, and how it’s working.

When you reserve a Lightning Lane, you can’t make another one until you redeem it, or until 120 minutes have passed since you booked it. (LLs that are booked before park opening behave as if they were booked the instant the park opened.) I’m going to call that time period where you can’t book another one “the blackout”. Here is the rule:

Do not book any Lightning Lane unless it saves at least 10 minutes of wait time per hour of blackout.

If you can’t find any LLs that meet that rule, then book away whatever you want with impunity. You’re down in the dregs anyway, and what you want to ride will probably make more difference to your total savings than which LLs you book.

(As a quick note for anyone who didn’t read the other post and doesn’t want to, in order to make this work you need to know that if the standby wait is 10 minutes that doesn’t mean you can save 10 minutes with a Lightning Lane.) 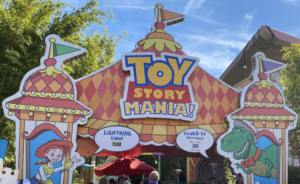 Here’s what I’m going to cover:

It’s Very Easy to Make Genie+ “Worth It”

The problem is, those other parks offer a front-of-line pass that is much simpler to use. That simplicity means that two guests on the same day using their passes are likely to have reasonably consistent experiences. Genie+ is cheaper, but it doesn’t offer that simplicity, and that means you can have wildly different outcomes. Before we can even begin to think about whether Genie+ is “worth it” once you add in the extra effort of learning how the system works, we should answer the question of how hard it is to break even.

I put “worth it” in quotes because everyone sees value differently. For this article, I’m going to say that Genie+ is worth it if it saves an hour of wait time: anything else is gravy. That’s based on a calculation that if you go to the parks from open to close with a 1-day ticket, you’re paying $9 to $16 per hour. The high end there is the same as the cost of Genie+.

Of course, you might not go for the whole day. But you also might have a 5-day ticket, where the per-day price is reduced by 23%. So let’s just step past that rabbit hole, shall we?

Last week, Becky ran an interesting virtual experiment comparing two Genie+ strategies. One team (“Stacking”) relied on having a lot of knowledge about Genie+. The second team (“Use it or lose it”) used an approach that might be taken by a guest who knew absolutely nothing about Genie+ or touring theme parks, and had never visited Disney World before. Becky showed an example day that a guest might experience with each strategy.

Here are the savings, and I’ve included the average amounts of wait time that you could expect to save for each park. Looking at the second row, we can see that the no-info team beat that 60-minute mark in every park.

You can also see that the difference between the two teams was sometimes pretty large. It’s tempting to view that as evidence that it’s easy to make Genie+ worth it, but hard to maximize the value. I worried that the message readers would take away is that you need to focus on a single strategy or do a lot of advance planning to be successful with Genie+. The average person paradox means that whenever there’s just one way, you’re going to have a lot of unhappy people who that way doesn’t suit. So I wanted to see if the “early return” strategy could be rescued into something that gives you a good result without a lot of complexity. Or at least, without a lot of complexity that isn’t already built into Genie’s rules.

When I looked at what those teams actually did, it turned out to be easy to see where the “Use it or lose it” team went wrong. In the next section, I’m going to show you how the no-info team made some choices that were worse than having no Lightning Lane reservation at all. (That’s why I’m not just saying it’s easy, but very easy to make Genie+ work out. Because even a team with so little information that they made some massive missteps did it, in every single park.)

The “Stacking” team made their choices based on estimated wait time savings, and the Simple Strategy also relies on those savings. But the simple rule might feel a little easier to use; you don’t have to know which one saves the most time. It’s also more flexible. It’s easier to have multiple choices that meet the rule. That matters because it gives you more control over how you tour the park; in some cases this flexibility can give you better results than stacking.

I said that the no-info team made Lightning Lane choices that were worse than not making a reservation at all. Now I’m going to put my money where my mouth is with an example.

Exhibit B: Revisiting the Animal Kingdom

In Animal Kingdom the “Use it or lose it” team started off at 7 a.m. by making an 8:15 a.m. LL for It’s Tough to Be a Bug. They finished their day gambling on an LL for Na’vi River Journey, with only a 50% chance that it was still available at 3 p.m. I made a single change, then looked at what would happen if the team used the same rules over the rest of the day.

My team was able to book the final LL two hours earlier, guaranteeing that it would be available. Want to know what I changed? They still went to see It’s Tough to Be A Bug first thing, but they didn’t use an LL for it. In fact, they didn’t start booking LLs at 7 a.m., they waited until they got to the park at 8.

In the original lineup, the no-info team didn’t save any time with their LL for the bug show. But it blocked them from making a reservation that would have saved them time, and that hurt them.

It’s even easier to see what’s going on when you look at what the “Use it or lose it” team did in EPCOT. I used our customizable touring plans to show what should happen if I went to EPCOT on a day exactly like the one Becky used in her example and did the same 6 beginning steps without booking any Lightning Lanes at all. 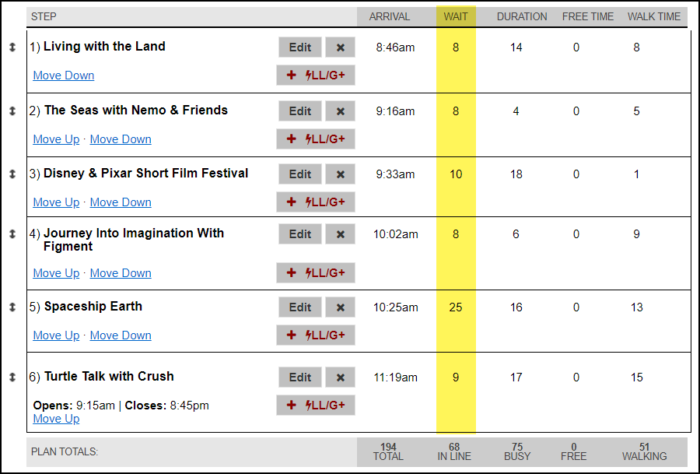 The original team gets to Turtle Talk with Crush at 12:30 p.m. with LL in hand. My team arrives over an hour earlier, not having used a single Lightning Lane. Looking at the wait times, you can see what’s going on. Only Spaceship Earth offers any real savings opportunity for Genie+.

Now that we’ve seen how much impact bad choices can have, let’s take a more detailed look at those results.

The “Stacking” team chose their LLs based on which rides had the largest time savings. But in every case, it turns out that you can make up most of the difference by staying away from some easily-recognized choices that don’t save time.

(Note for stats nerds: the HS results demonstrate why Becky’s example outcomes, and my similar test with the Simple Rule, should be treated in the same way as an in-park test. It’s a single sample and not a statistical expectation. In order to get the true “average” result, you’d want to run Monte Carlo simulations or conduct multiple real-life tests.)

How Does The Simple Rule Work?

The goal of the simple rule is to keep you from making bad picks.

At every park, the average time savings over all the Lightning Lanes you can get is about 20 minutes per ride. (Actually, at Hollywood Studios it’s 30-ish but that turns out not to matter because there are so few on the low end.) For many of those rides, you’ll need to wait out the full 2-hour blackout. So any time you’re doing better than 10 minutes per hour of blackout, you’re beating the average.

If you’re matching or beating the average, it’s not a bad pick.

Of course, eventually you’ll run out of picks that satisfy the rule. But remember, the no-info team messed up at the beginning every time. By the time you get to the bottom of the barrel, you’ll have a lot of fine stuff under your belt already. More importantly, everyone else will be picking over the scraps with you, not eating the prime rib while you’re gnawing on bones.

Book the Lightning Lane that saves the most time per minute of blackout, keeping in mind other factors like how late you want to be in the park, LLs that might sell out, etc.

I wrote that I believed most users would tend to extend the simple rule to this form on their own because humans are good at working with greedy algorithms (which this is). Just like the simple rule, we can dig down to see into the mechanics of how users will tend to drift towards this more refined version on their own.

The advanced rule sounds complicated, enough to dissuade users from trying it if it’s the first thing you tell them. But most of what it’s doing is accounting for the fact that the Simple Strategy is a blunt instrument.

There are two big cases where the Simple Strategy could use a little more nuance. The first is where a valuable pick is going to sell out if you don’t take it. The second is that if your return window is longer than two hours anyway, obviously a pick that saves 40 minutes is better than one that saves 20.

In both of these cases, what’s really happening is that a user is trying to decide between multiple options that meet the simple ruler. The advanced rule offers guidance about how to make those choices when the difference is significant. But really, the right answer in these cases is often obvious. For instance, in the case of the LL that will sell out, FOMO is going to drive the user in the right direction.

The Simple Strategy is useful because it doesn’t rely on knowing more about Genie+ data than what you can see on the Tip Board as you’re using it. It can also be more flexible in accommodating how you want to tour the park than some other approaches.

It turns out that the simple rule still relies on all that data that Becky has crunched. It’s just distilled into something that might be easier to use for decision-making on the fly. The “10 minute” number in the simple rule comes from knowing what you need to aim for to stay close to the average time savings.

Have you used Genie+? What’s your favorite strategy? Let us know in the comments!

4 thoughts on “How the Genie+ Simple Strategy Works”