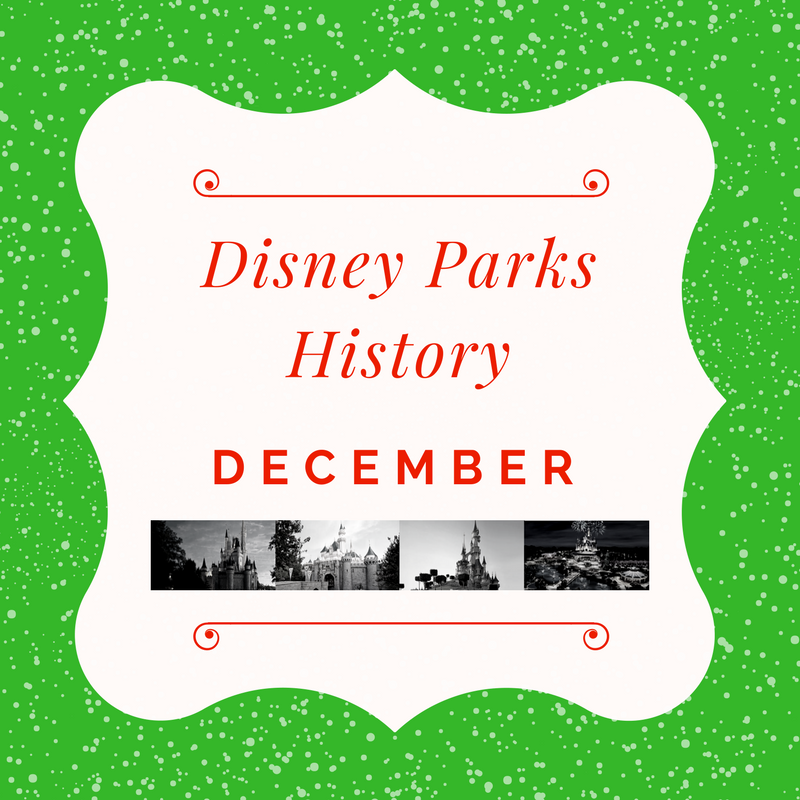 We’re back with your monthly dose of Disney Parks history, and I can’t believe it has been a month since the last history post. Is time flying by for everyone else too? With winter holidays upon us, it’s time to dive into December happenings, so let’s see what Decembers of years past have brought to the Disney Parks.

1973: Pirates of the Caribbean opened at Walt Disney World over six years after the original version first appeared at Disneyland. The attraction provided plenty of controversy over the years as scenes were updated to more family-friendly versions or to incorporate characters from the movies. Most recently, the plans Disney announced included changes to the auction scene, coming in 2018.

1980: Less than a week after construction plans were approved, the groundbreaking and site dedication ceremonies took place at Tokyo Disney, which would become the third Disney Resort.

1989: A long time ago, in a galaxy not so far away, Star Tours opened in Walt Disney World, a few years after Disney partnered with George Lucas for the Disneyland version.

1991: Old Key West opened as the first Disney Vacation Club resort. It was originally known as Disney’s Vacation Club Resort until the name was changed in 1996. To this day, it has some of the most spacious rooms on Disney property.

1998: La Nouba by Cirque du Soleil debuted in a custom-built theater in what was then known as Downtown Disney. Disney announced earlier this year that the current show would end after 19 years of performances with the final show taking place on December 31st.

2003: Pop Century opened at Walt Disney World after lengthy delays. Initially, the resort was expected to include theming for each decade of the 20th century. However, the 1900-1940 section remained unfinished, and it was later developed into the Art of Animation resort instead. 2010: Mickey’s PhilharMagic soft opened in Tokyo Disneyland, making it the third iteration of the attraction across all the Disney Parks.

2012: Splitsville Luxury Lanes opened their location at Disney Springs, adding 30 bowling lanes and even more dining and entertainment options to the area.

2012: As part of the New Fantasyland expansion at Magic Kingdom, Under the Sea – Journey of the Little Mermaid and Enchanted Tales with Belle opened.

2012: The current version of Test Track premiered, allowing guests to customize their own custom concept vehicles for the first time.

2013: Animal Kingdom discontinued the use of paper FastPasses and was the first of the four Walt Disney World parks to test the change.

2015: In case the niles and niles and niles of jokes during Jungle Cruise weren’t enough for you, Skipper Canteen opened in 2015, giving guests the opportunity to dine with a skipper server.

2016: In a big shift from Magic Kingdom tradition, beer and wine became available at table service restaurants throughout the park. Prior to that, it was only available at Be Our Guest for dinner.

That’s all she wrote for this month. Can’t wait to see what we can dig up for January!

One thought on “This Month in Disney Parks History: December”