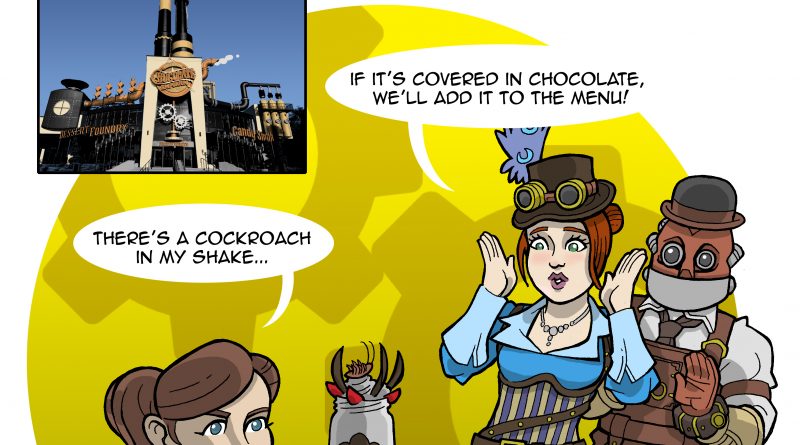 This week’s SATURDAY SIX takes a look at 6 Reasons We’ll NEVER FORGET 2018 (No Matter How Hard We Try!). With the new year upon us, it is time for another SATURDAY SIX annual tradition of looking back at some of the most “memorable moments” of the previous year. Now we already covered some of the great things that happened during the past 365 days, and some of the worst as well, so today let’s look at six theme park stories that fall into a different area. Events that are almost hard to believe actually happened, but we promise that they did, and we’re here with the proof. So let’s kick it off with…

This past year Walt Disney World took some well-earned criticism thanks to labor cutbacks that ended up negatively affecting the guest experience. Attractions not running at full capacity and garbage cans overflowing are some of the side effects that come when you try to reduce costs. The Universal Orlando Resort added to their bottom line by thinking outside the box and – instead of reducing labor – reduced letters of the alphabet. That’s right, throughout the calendar year letters were missing from signs across the resort for reasons we have yet to determine.

After gimmick infringing on Toothsome’s over-the-top milkshakes at Beaches & Cream, Disney decided to follow Universal’s lead on leaving letters off their signs.

Meanwhile, out in California, they went with the old standby with a Disney California Advneture typo.

What’s the moral of the story?

Kids, you tried your best and failed miserably. The lesson is, never try. – Homer Simpson

Just last week in this fine blog series, we covered some pieces of merchandise that Disney should have reconsidered making this year. Another item that can be added to that list is this t-shirt that was made for Annual Passholders. Looking at the shirt, something just feels “off,” so we reached out to superstar graphic designer Rob Yeo to explain the problems. “First of all, the color choices mean that every other line is just about illegible. Secondly, they didn’t put the attraction names in their respective fonts, which makes it harder for people to recognize the letter which came from it. Plus, having all the attractions in a generic font make it look like a poorly thought out vacation group shirt.”

Thank you Rob. That is a lucid, intelligent, well-thought out response. Much more reasonable than our review of the shirt: IT STINKS!

To show what could have been done using the same idea, Rob created his own version of the shirt that is much more pleasing to the eye and also makes sense.

When Toy Story Land opened in June, everyone was excited — mostly because DHS was finally going to have more rides in the park than Universal’s Seuss Landing has in one area. No one was more excited than the Disney Parks Blog, which posted a video with Cast Members who had enjoyed the land’s signature attraction Slinky Dog Dash. In a move that would make Chicago politicians beam with pride, the original version had one Cast Member identified as Jimena early in the video, and then later as Audriana near the end. An updated version of the video now has a different Cast Member identified as Audriana, but as you well know, the spirit of this end of  year retrospective is Never Forget.

Captain Cruiseline posits the theory that Jimena and Audriana are – in fact – identical twins.

It’s going to be hard to ever top the Animal Kingdom Poop Snacks, but Disney tried their best this year with a macaron that looked like it came straight from the Netflix show Nailed It. This macaron is so legendary, we are imploring that Disney immediately halt production on Mickey & Minnie’s Runaway Railway and bring back The Great Movie Ride except now it will be The Great Macaron Ride…

“Welcome aboard. At this time, I’d like to ask everybody to please remain seated throughout the ride, and keep your hands and arms within the vehicle at all times. Also, for the safety of our cast, and the comfort of those around you, please no flash photography, portrait photography, or the use of iPads to film. Alright, now that we’ve taken care of business, let’s talk about me. My name is Derek Burgan, and I’ll be your guide during this magical journey into macarons. It’s the perfect job for me because I love macarons. So, is everyone ready?”

That intro is free Disney, but the rest is gonna cost ya. Contact my legal representation via Len@TouringPlans.com

# 2 – Oh, you think you’re having a bad day because you have to keep refreshing MDE to see if FP+ experiences become available? Regular readers of the SATURDAY SIX know how much we love Universal’s Toothsome Chocolate Emporium in CityWalk. With walk-around characters, a huge menu (including an all-day/everyday brunch menu), and next level bonkers milkshakes, the restaurant was an immediate hit with guests when it opened in 2016 and has remained extremely popular ever since. In August, the news hit that Toothsome was shut down for several hours after a health inspection found several roaches in a chocolate prep room. In the theme park community, the news went viral pretty quick. It is important to note that – in Florida – the last thing you probably want to do is read up on possible health inspections of your favorite restaurants. You may discover that Morimoto Asia – another SAT SIX favorite – encouraged guests who ate between November 6 and November 15 to get vaccinated for Hepatitis A. Name your favorite theme park restaurant and it has probably been dinged for minor or major (“flying insects,” “green/black mold-like substance”) violations just in the last few years. Now you know why we at the SATURDAY SIX have a strict don’t ask/don’t tell policy when it comes to health violations at restaurants. They’ll keep serving the comfort food we know and love, and we’ll pretend we’re not the thinnest line imaginable away from being the monkey in Outbreak.

We just hope this means we’ll one day see printed up copies of The Magic, The Memories, and MERCH! adorning the walls at the Disney Outlet Stores. A boy can dream, can’t he?

So there you have it: Six Reasons We’ll NEVER FORGET 2018 (No matter how hard we try!). See you next weekend for the latest installment of the SATURDAY SIX, where we’ll look at something fun from the world of Disney and Universal. If you enjoyed yourself, be sure to check out The Magic, The Memories, and Merch! articles, or, for your listening pleasure, check out the E-Ticket Report podcast. You can also follow Your Humble Author on Twitter (@derekburgan).

6 Reasons We Love MICKEY’S NO SO SCARY HALLOWEEN PARTY

Special Thanks to The Elite Brandon Glover, the bio-est of all reconstructs @bioreconstruct, Mr. ‘Ohana Tim Grassey, the SAT SIX Fun Squad of Parkscope Joe and Nick, Orlando penciler extraordinaire Joel Carroll, DisTwitter Icon @SuperWeenieHtJr, crazy cat lady – and our Fearless Leader – Laurel Stewart, and Hermoine Granger’s tutor Megan Stump for their invaluable assistance with this article. The SAT SIX is inspired each week by goofballs Aengus Mackenzie and LitemAndHyde and you Potterheads will  enjoy Meg’s other blog work over at the Central Florida Slug Club.