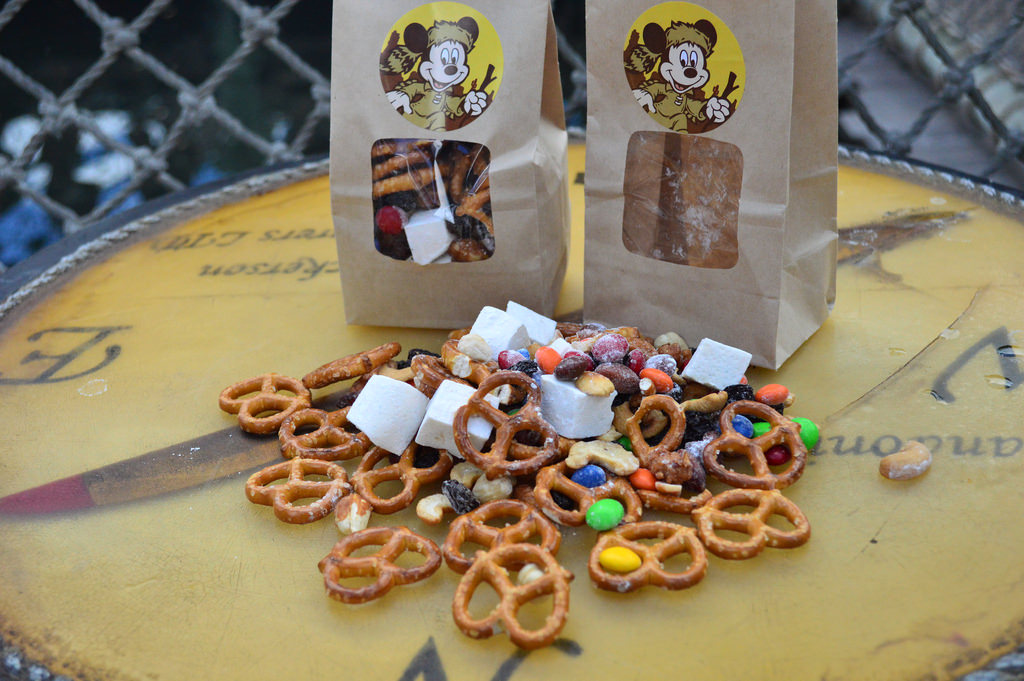 This week’s SATURDAY SIX takes a look at new(ish) snacks at Disney’s Magic Kingdom! With all the new snack additions over the past few months, we’re here to look at some of our favorites, starting with…

At Westward Ho Refreshments in Frontierland you’re going to find the cutest themed bag of trail mix available in the wild west. The menu lists Happy Trails Mix as containing “house-made marshmallows with pretzels, chocolate gems, and mixed nuts.” After an in-depth investigative report, our findings show that the bags contain 80% pretzels and also include an unadvertised ingredient: raisins. The marshmallows were a true surprise, as they were certainly not some hard-as-a-rock marshmallow from a cereal box, but instead are actually made in-house and cut into square cubes.

The small paper bag that the trail mix comes in is resealable, and comes adorned in a sticker featuring Mickey in his best Davy Crockett cosplay (including the requisite coonskin cap.) Outside of the ratio of pretzels being completely out of whack compared to everything else in the bag, the Happy Trails Mix is one of the most fun themed snacks in any theme park land that we find is worth going out of your way for. ($4.99)

Let’s stay in Frontierland and get some grub over at the Golden Oak Outpost. Here there are a couple new offerings including chili queso fries and something called “barbecue chiccarons.” These are seasoned pork cracklings. For those who don’t know what pork cracklings are: 1) consider yourself lucky and 2) it’s fried pieces of pig skin.

We can confirm these are cunchy and Disney is very liberal with the seasoning. However they are still a rich man’s pork rind and not really something we would ever order again unless it was in service to you, Dear Reader. ($4.49)

Next stop is in Fantasyland at Friars Nook, where we had to carefully step over the fans still in the throes of despair after the venue removed the popular mac & cheese bowls. In their place came several different types of loaded tater tots and – more importantly – a fried Twinkie. Anyone who has been to a state fair lately knows the biggest growing trend for ‘Murica foodies is fried anything. Fried Oreos, fried cheesecake, fried mac & cheese… you can even get fried Coke and Pepsi! At the Friar’s Nook you can get your fried Twinkie topped with vanilla, chocolate, or strawberry sauce.

The crunchy “shell” of the Twinke combined with the usual soft goodness of a normal Twinkie on the inside combine for a great flavor profile. I’m not sure if I’m using any of those words right, but just know this snack actually tastes really good. ($4.99)

When it comes to WDW, Rose Gold is the new black, and you’ll find this #Millenial color on everything from Mickey ears to sweatshirts. Now we can add cupcakes to the list as an ornate version is being sold in Main Street Bakery. This is the first dessert which comes with rules though. Anyone who purchases the rose gold cupcake must IMMEDIATELY post a picture on Twitter, Instagram, or Snapchat. The picture must also include Cinderella Castle in the background or you’ve basically thrown your money away. This is all included in the fine print when you sign your receipt at the bakery, so don’t even think about violating the TOS.

Here’s what we found out. The Rose Gold Ears Cupcake is actually good. This was shocking because many cupcakes quickly pushed out to take advantage of a fad are horrible and generally just have a stick on top with a logo stamped on for a DISNEY BRAND.

The large amount of buttercream icing on top is themed to roses and looks and tastes fantastic. The base of the cupcake is a mix of red velvet swirled with vanilla. To quote Ned Flanders, this is scrum-diddily-umptious from top to bottom, and one of the best cupcakes Disney has ever made.

Now this snack actually came out late last year in Tomorrowland, but we love Disney’s soft pretzels and this is one you need to try. We should note that we also love puns, and The Lunching Pad name is so groan-worthy that’s its actually great. Here is where you can get the salted caramel pretzel.

You have the warm salted exterior of the pretzel and upon each bite you also get some of the sweet caramel that is magically stuffed inside. Oh, and it comes with a side of CHOCOLATE SAUCE. Like you needed another reason. ($5.79)

STOP THE PRESSES. The iconic Dole Whip has been dethroned and now is not even the best option at Aloha Isle. All hail the new king: Pineapple Upside Down Cake. Yes, this is a bit of a cheat as the new snack is topped with Dole Whip, basically making it two snacks in one, but nobody said we played fair here at the SATURDAY SIX.

In all seriousness, the Pineapple Upside Down Cake made its debut late last year and has taken the Dole Whip community by storm. The small cake base is moist, tasty, and loaded with pineapple. Inside there is a Maraschino cherry that has been cut in half, and the top is a giant serving of everyone’s favorite Dole Whip. This snack will immediately make your day, and save yourself even more time by taking advantage of mobile ordering. It never fails, guests are in line for a venue that serves less than 5 items and when they get to the counter all of a sudden it appears as if they looking at a menu for the Cheesecake Factory.

So there you have it: Six Snacks at the Magic Kingdom You Gotta Try (Well, Maybe 5)! See you next weekend for the latest installment of the SATURDAY SIX, where we’ll look at something fun from the world of Disney and Universal. If you enjoyed yourself, be sure to check out The Magic, The Memories, and Merch! articles, or, for your listening pleasure, check out the E-Ticket Report podcast. You can also follow Your Humble Author on Twitter (@derekburgan).

6 Snacks at DISNEYLAND You Gotta Try

6 Of Our Favorite Mickey-Shaped Foods

Special Thanks to crack staff photographer Brandon Glover, and blogger to the stars Megan Stump for their invaluable assistance with this article. Be sure to also check out Brandon on The Park Blogger podcast with goofballs co-hosts Aengus Mackenzie and LitemAndHyde , while fellow Potterheads may enjoy Meg’s work on the Central Florida Slug Club.