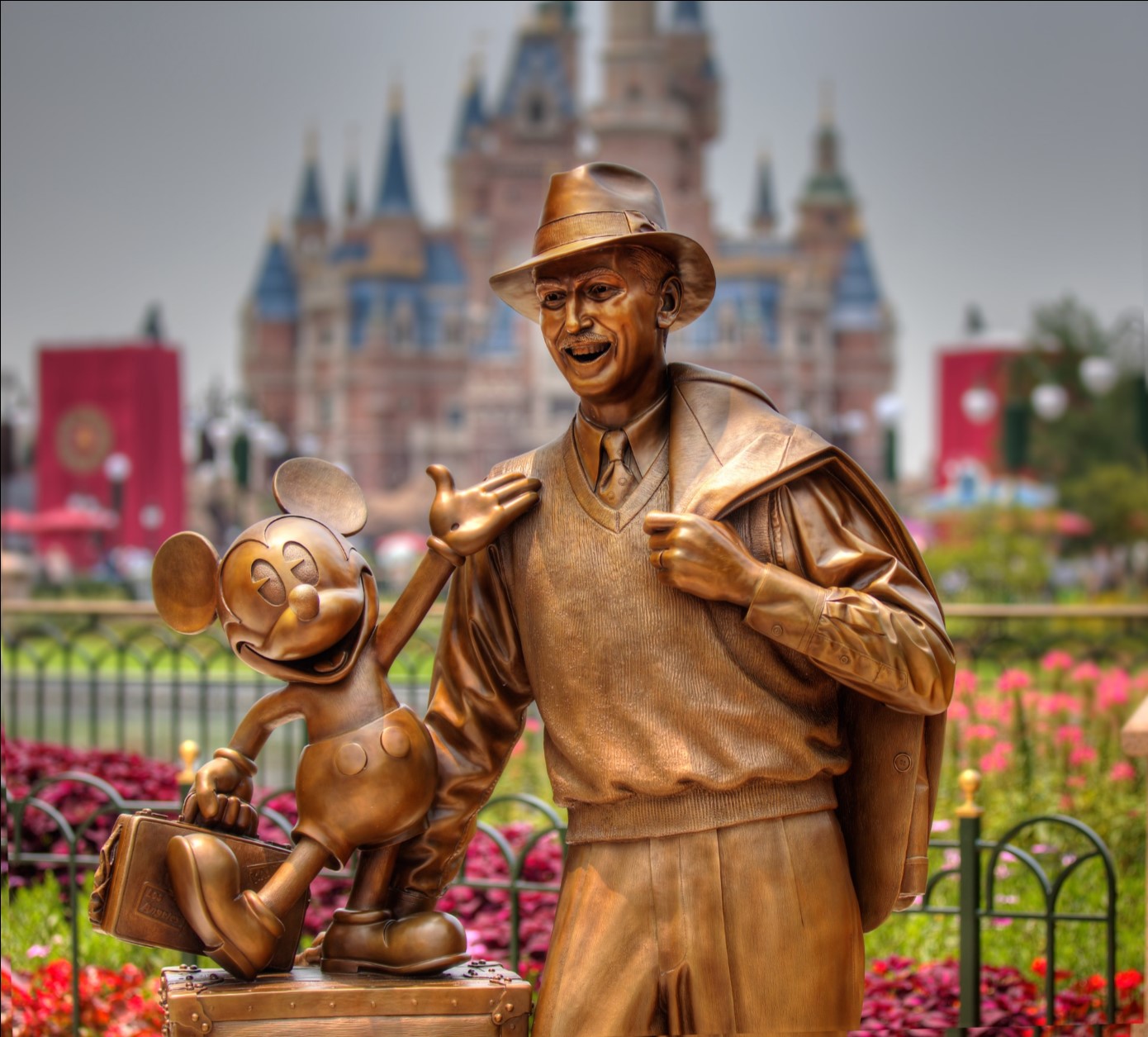 This post is written by guest writer Elisabeth Lackey, who recently returned from an opening week trip to Shanghai Disneyland. Enjoy!

No surprise, but entry lines for Shanghai Disneyland’s Grand Opening were impressive. Jammed in among a mass of jostling umbrellas we waited a bit over an hour and a half to step through the turnstiles. Later we read online that the park opened 30 minutes early to help accommodate the crowds, but we saw no indication of this by the line’s movement. After quick pics at the Mickey clock tower and some gaping at the Enchanted Storybook Castle, we headed to the Adventure Isle Fastpass kiosk. After about 15 minutes the line was dismissed because all FPs were distributed for the day. Having spent so much time in line with no results except that the Minnie t-shirt I was wearing had become rain soaked, frustration began. Half an hour later, however, I was with my family experiencing the magnificent Pirates of the Caribbean–Battle of the Sunken Treasure and my mood transformed to one of wonder and appreciation. Since we had expected crowds and a bit of chaos during SDL’s Grand Opening, we were so pleased with how the rest of our day progressed. Lines were long, e-ticket attractions shut down periodically during the day, and Fastpasses were unobtainable, but we were able to experience much of the park’s offerings. The TRON Lightcycle Power Run’s actual wait time was significantly longer than posted (60 min compared to a stated 30), but we were able to ride the light and action cycle ride. We hopped on The Many Adventures of Winnie the Pooh which is identical to the Magic
Kingdom version. Next was a late lunch at Stargazer Grill, where we watched Mickey’s Storybook Express parade from afar. Then we strolled down Mickey Avenue before taking an afternoon break. When we returned to the park, we took advantage of the shortening lines to ride the fantastic Pirates again and experience a well done update of Peter Pan’s Flight. I adored how this attraction added modern touches while maintaining its nostalgic look. By the time Ignite the Dream–a Nighttime Spectacular of Magic and Light began, we were able to walk onto Voyage of the Crystal Grotto and catch the fireworks from our boat as we floated through a canal lined with a lighted displays of classic Disney tales. We jumped into the Roaring Rapids line, down to less than 10 min from 90 when we checked during the afternoon. You spin and splash in a round tub similar to the Kali River Rapids on a hunt for a prehistoric reptile. Fun, enjoyable, and wet, but not turbulent or particularly thrilling.

As the park began to shut down at the end of its first day, our older kids hit up TRON (only a 20 minute wait!) for one last run and my husband and I went with our youngest on a hunt for tsum tsums. Obviously the first day of a theme park will have crazy crowds and wait times, but on the second day, we found the park entry still had issues. Bag check moved at a reasonable pace, but the ticket process was tedious. The number of guests through a turnstile in half an hour was approximately equivalent to what WDW could handle in under 10 minutes. On our second day we spent an hour after park opening waiting to be admitted. Our first task was to snag Fastpasses for Soaring Over the Horizon. Then we headed to our favorite spot- Treasure Cove. Remarkably detailed with clever touches this area is some of the best implemented Disney theming anywhere. Of course we once again boarded our favorite attraction Pirates with a less than 30 minute wait. Well done with the large capacity boats Imagineers.

We explored Fantasyland with its lovely picnic area and massive, impressive Enchanted Storybook Castle. Wait times for castle experiences were over an hour for the walk-through “Once Upon a Time” Adventure and 105 minutes for the Voyage to the Crystal Grotto. We ate lunch at the fabulously decorated Pinocchio Village Kitchen. No paper plates for SDL quick service spots; melamine plates themed to each land are used. After our afternoon break, we walked through Disney Town and entered the park from a side entrance in the shopping area-no lines! We meandered through the Gardens of Imagination and ate Mickey ice cream bars with chocolate ears and a vanilla head.

For the evening we had Fastpasses for TRON and Soaring Over the Horizon. The FP line for Soaring was over a 30 minute wait in a somewhat suffocating, high stone wall queue with no details or distractions. The preshow and Shanghai finale are unique to China, but the main journey is the same as the update in the States. Except for Chinese rendition of Heigh Ho and an animated ending, the Seven Dwarfs Mine Train is a replica of Florida’s.

Currently most guests to SDL seem to be local, so the park empties out in the late evening as visitors tire out and leave to travel home. In the evening we were able enjoy the inside-the-castle attraction “Once Upon a Time” Adventure with no wait. The interactive aspects, the special effects, and hearing Snow White sing in Mandarin are lovely, but the real attraction is the excellently done interior castle details.

To end our last day in Shanghai Disneyland, we rode Pirates of the Caribbean one more time. Many thanks to all of you who purchased Disney After Hours tickets and endured rumored staff cutbacks to help cover the cost for Shanghai Disneyland. A hunk of the 5 billion plus price tag was money well spent. Immense walkways, details rivaling Tokyo DisneySea, the impressive theming, and the park’s vast size were a solid investment. TRON and Pirates of the Caribbean-Battle for the Sunken Treasure take theme park attractions to a new, higher level. The picnic area and Gardens of Imagination add a calm, spacious feel to the park. The Enchanted Storybook Castle is a grand, monumental structure you can go through, beneath, and up into. No other park’s palace is as detailed or allows so much access. Bob Iger’s mantra of “authentically Disney, distinctly Chinese” seems an accurate description of the park. From the Mandarin version of a Pirates Life for Me to the Chinese zodiac themed Gardens of Imagination, we never forgot we were in China. A serious contender for best Disney attraction on the planet, Shanghai’s Pirates employs effects and technology to create an immersive ride like no other. Loaded into a large capacity boat, we floated through a cave and were greeted with a new, twisted version of a familiar scene- the classic dog with keys and jailed pirates skeletonized. Soon we met Jack Sparrow, virtually immersed under the sea, sailed through an underwater ship graveyard, and encountered mermaids, Davy Jones, and an epic sea monster. By the time our boat emerged in the midst of a pirate ship battle, I was so stunned by the experience I was unaware every word spoken had been in Mandarin. We found this experience so spectacular, we sailed the high seas four times.

With no knowledge of Mandarin, we negotiated the parks comfortably with only a few issues. Menus and signs are in English and Chinese and maps and guide times have English editions. Restaurant cashiers typically spoke English, but most Cast Members speak only a few phrases and are unable to answer questions for English speaking guests.

Our lack of understanding of the Chinese language often left us bewildered on the attractions. Why does Jack Sparrow’s gold disintegrate into sand? Who is the hawk lady introducing Soaring Over the Horizon? Why did all the Chinese speaking guests disembark the ferry after the Cast Member’s spiel?

Flight is my only response to fight or flight. Turbulence and heights cause me to panic, but in the safety of the Disney bubble I like some adrenaline with my attractions. SDL needs to up the rush factor. While TRON is a modern, cool ride with fun twists and turns and innovative cycle-style seating, the coaster could use a bit of a thrill injection. The drops are more Barnstormer than Space Mountain and Test Track beats it for speed. Roaring Rapids only meets the definition of thrill ride if you consider getting wet exhilarating.