It’s safe to say that most people were surprised by Disney’s announcement last week that Star Wars: Galaxy’s Edge is opening ahead of schedule, on May 31 at Disneyland in California and on August 29 at Disney’s Hollywood Studios in Florida. Last week we posted about how this land’s opening will impact wait times, the Crowd Calendar, and the touring plans.

Disney is using a reservation system to restrict Galaxy’s Edge access at Disneyland for the first month the new land is open. As of today, there are no plans to restrict crowds at Galaxy’s Edge in Disney’s Hollywood Studios when that land opens. If DHS’s Galaxy’s Edge opens without restrictions, we expect DHS crowds to be a ’10’ on our 1-to-10 scale. It’s likely the land will reach capacity on many days this year, too.

Further, if Disney does not control the number of people queuing for Millennium Falcon: Smugglers Run, its wait times should reach record levels. Our current record for highest posted wait time is 450 minutes for Universal Orlando’s Harry Potter and the Escape From Gringotts at 1:50 p.m. on July 8, 2014.

The crowd levels on the crowd calendars are for the non-Galaxy’s Edge areas. We expect attendance will be higher at both Disneyland and Walt Disney World. The new land will have an impact on crowds at all parks.

We know that there will be an increase in attendance due to Star Wars: Galaxy’s Edge. Disney will limit the number of guests in a park and land when they approach capacity. We don’t know what Disney is planning to do to handle the crowds that arrive before park opening. It is unlikely that Disney will allow guests to line up for multiple hours to get into the new land. In California, Disneyland will have a reservation system for access to Galaxy’s Edge between May 31 and June 23. We expect Disney will have some sort of reservation system for Galaxy’s Edge for California beyond June 23 and for Florida when it opens in August.

Digging into Disney’s Frequently Asked Questions, Millennium Falcon: Smugglers Run is going to open without FastPass+ (Disney World) and without FASTPASS (Disneyland). This is an interesting strategy, and probably a smart move. This will give more people an opportunity to ride and help keep the standby line moving.

My personal guess is that Disney will run Galaxy’s Edge similar to how it ran previews for Pandora – The World of Avatar. Groups of people will be allowed entrance to Galaxy’s Edge for a set time and allowed to ride Smugglers Run once. They could hand out wristbands at the park’s entrance that grants access to the land at a specific time.

We assumed a mid-June opening date for Galaxy’s Edge,  so the announcement is only affecting days from May 31 to June 18.  For these 19 days, we expect Disneyland to have crowd levels of either a 9 or 10. We expect guests will arrive at Disneyland even if they don’t have a reservation. Those guests will likely be disappointed and not get into Galaxy’s Edge. 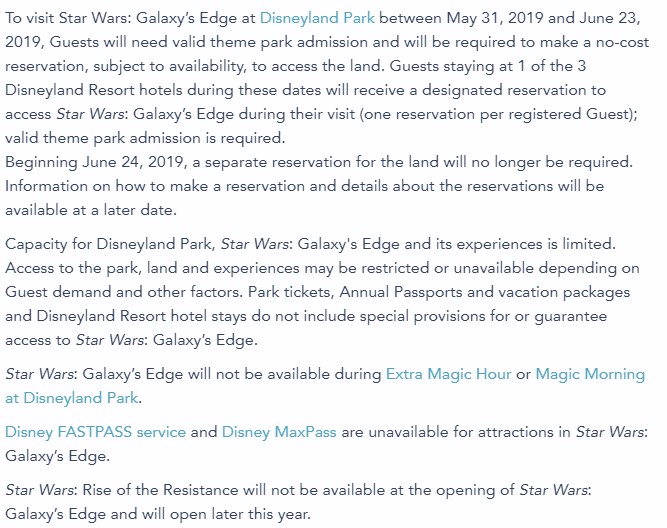 Only guests staying at the three on-property Disneyland Resort Hotels (Paradise Pier, Grand Californian, and Disneyland Hotel) will be guaranteed access to Galaxy’s Edge between May 31 and June 23. Others guests may be able to get a reservation via an unannounced process.

June 24 will be the first day when all park guests will have access to Galaxy’s Edge. Disneyland has park-specific blockouts on its various Annual Passports. As a result of that, many Annual Passholders will be blocked out all summer from Disneyland Park and thus cannot visit Galaxy’s Edge. That means that August and September will be the first time that many Passholders will have access.

Since these Annual Passholders are blocked out of Disneyland Park during the summer, we expect increased wait times across the Esplanade at Disney California Adventure; this is already reflected in the crowd levels we posted in early March.

Since Disney had said Galaxy’s Edge would open in “Late Fall” in Florida, the opening date of August 29 at Disney’s Hollywood Studios was a big surprise. Many people expected a slow fall for Walt Disney World. Unfortunately for them, this fall will see above normal crowds. But fortunately, early fall is a slow time at Walt Disney World, so “above normal” could be worse.

Star Wars: Rise of the Resistance will not open on August 29. This will prevent some people from going to Walt Disney World in early fall.

We expect the biggest impact on crowds will be at Disney’s Hollywood Studios. The other parks will have increased crowds, but not as large as those at the Studios.

The best way to navigate the parks is to use a Touring Plan. Wait times are updated through the day, and a Touring Plan will keep you ahead of the crowds.

Mornings are going to have a majority of the guests at Hollywood Studios going to Galaxy’s Edge. Zig when others zag: head to Sunset Boulevard and Toy Story Land while all the other guests go to Galaxy’s Edge. Afternoon crowds in the existing portions of the park will be higher as people leave Galaxy’s Edge.

We expect Disney will offer many Disney Early Morning Magic and Disney After Hours opportunities to get into Galaxy’s Edge before the park opens or after it closes. Possibly the only way to experience Galaxy’s Edge without huge crowds will be to pay extra.

Questions? Comments? Let us know and we’ll do our best to answer.