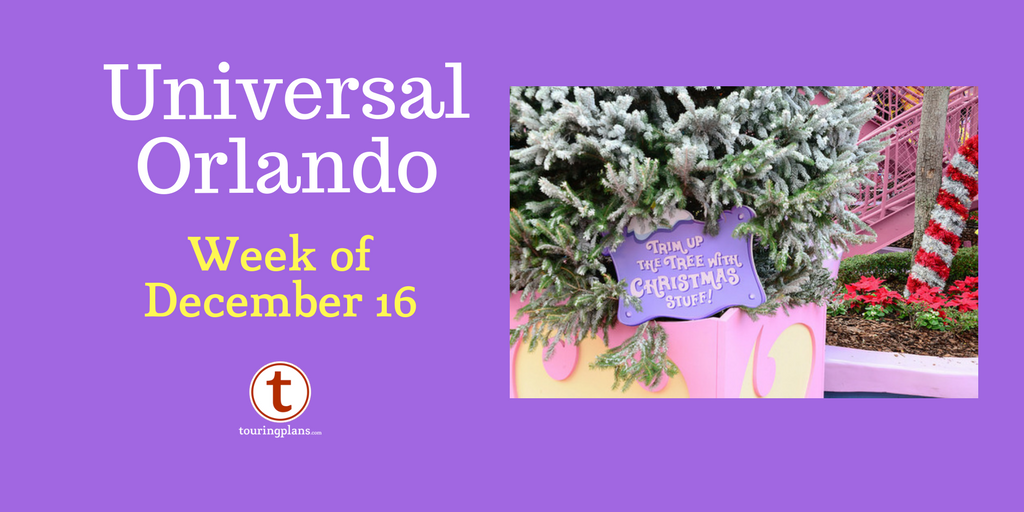 Hear that distant drum beat? It’s the sign the holidays are approaching (or are occurring, Happy Hanukkah) and with it comes cooler weather, increased prices, and terrifying crowds. This week we take a photo tour of the holidays at Universal Orlando, start a new segment “Small Universe”, and preview the week to come. We’re entering Christmas season at Universal Orlando and the crowd calendar shows to expect long lines and crowded pathways. Make sure to pack your patience. Winter weather around the United State will affect travel plans, keep an eye out for delayed and canceled flights. Here at Touring Plans Industries we aim to constantly innovate our vision using brand synergy and forward facing consumer initiatives. As such the Universal Orlando Weekly Preview is introducing a new segment: Small Universe, a look into my favorite, small items and experiences at the resort.

This week we look at one of my favorite COMBOS: the Large Warm Soft Pretzel and 862 IPA at NBC Grill and Brew in CityWalk.

Universal means large–the pretzel is over a foot in diameter and is served warm on a hockey stick stand. Jalapeño queso (mild for including jalapeño) and Cleveland’s own Bertman’s Ballpark Mustard (tangy, spicy brown mustard) are provided as dipping sauces. Every time I get the pretzel everyone at the table laughs at its size and then immediately devours it.

862 IPA is the house-made IPA from Florida Beer Company, the same brewery that provides the Wizarding World and Duff Brewery beers in the parks. Why did they name it 862? Project 862 was the code name for NBC Grill Brew during development. The beer is a west coast IPA style, featuring mild notes of hops resin and sweetness.

TouringPlans’ Brandon Glover takes us on a photo tour of the Holiday offerings at Universal Orlando.

Blue Man Group is offering a chance to purchase discounted tickets November 1 through January 1, 2018 starting at $49. If the show has piqued interested for you in the past, now is the time to buy tickets.