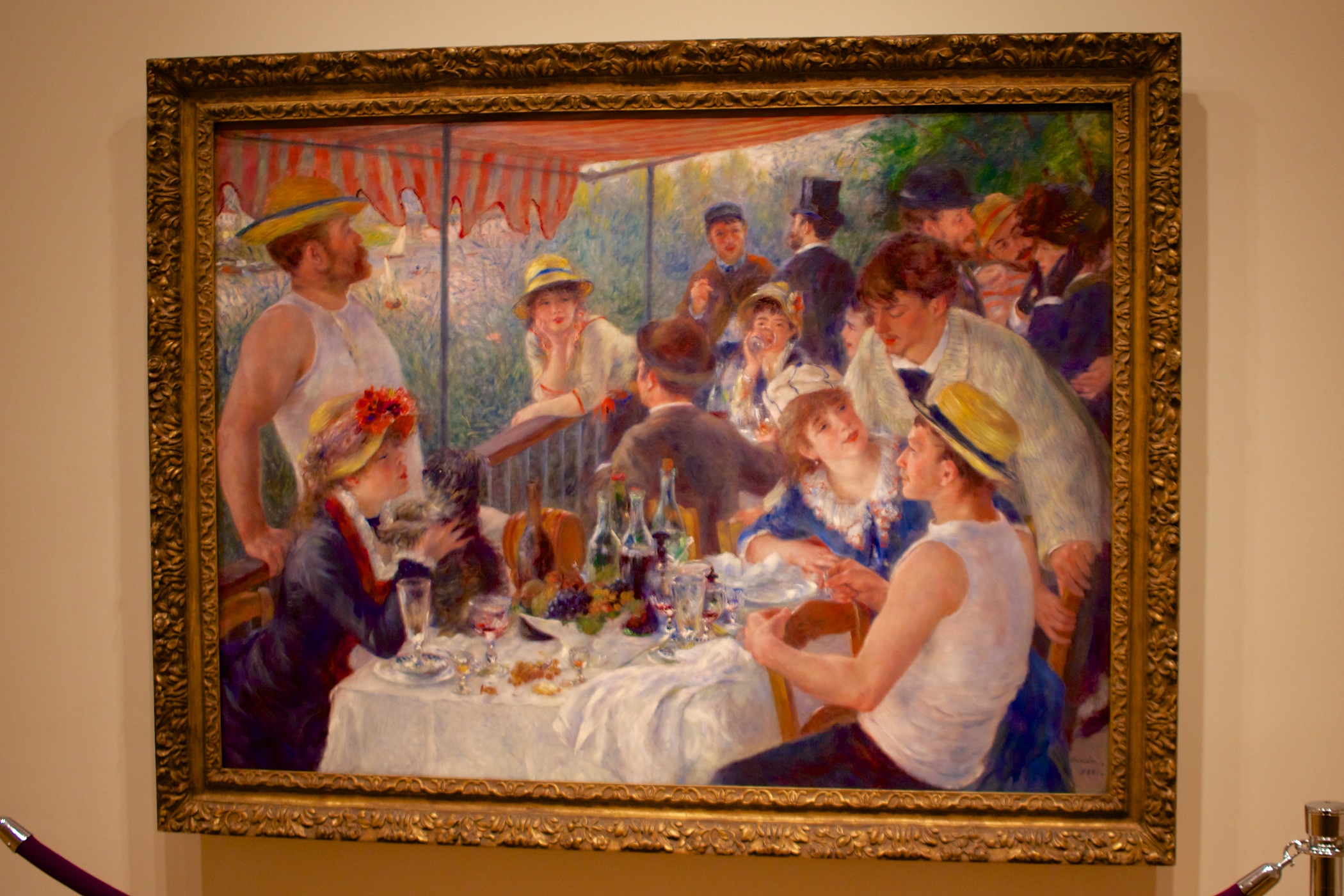 Many guests to Washington, D.C. don’t see many, if any, non-Smithsonian museums. I get it, they’re wonderful, easily accessible, and free, but there are others–lots of them. One of my personal favorites is the Phillips Collection in the Dupont Circle area. While it is not near the National Mall, it is still easy to get to being only 1 1/2 blocks up Q Street from the Dupont Circle Metro Station (Red Line).

Duncan Phillips began displaying his collected art in his family’s Dupont Circle home in 1921, even while the family still resided there. The original 1897 Georgian Revival house still makes up the part of the museum on the corner of 21st and Q Streets, although the Phillips family moved out in 1930 to accommodate the ever-growing gallery. In 1960 Duncan Phillips added what is now known as the Goh Annex – named after a Japanese businessman who funded its renovation – directly adjacent to the house. The third and final building that makes up the Phillips Collection is a former apartment building, the Sant Building, which was added in 2006 as part of a major expansion that also added 30,000 subterranean feet.

Where the Phillips Collection has an advantage over some other private art collections is that Duncan and his wife were interested in collecting modern art. Therefore, rather than having minor works by master painters, the Phillips Collection is home to some of the hottest artists of the early 20th century, people we consider masters today.

Housed within the collection are works by famous artists such as Renoir, Degas, Rothko, O’Keefe, Cezanne, and van Gogh and the museum continues to add contemporary artists. Special exhibits are also frequent, although there is a $2 increase on the weekend admission while exhibits are running. That same $12 adult fee is charged to visit any visiting exhibit on weekdays as well, although seeing only the permanent collection still remains an option for non-weekend visitors.

The interesting collection is well presented, making this a very worthwhile stop, even for a passive art lover. The museum also comprises a pleasant enclosed courtyard and a Tryst Coffeehouse that serves beverages, pastries, soups, and sandwiches. It really is possible to spend several hours enjoying the art and its surroundings despite the museum’s modest size. If you find yourself being overwhelmed by the size and scope of the major museums, the Phillips Collection might be perfect for you. Likewise, if you are a lover of impressionist and modern art, the Phillips Collection might be perfect for you too.

Wolfgang Laib – The Laib Wax Room. On the second floor of the Phillips House is where you will find one of the most strangely pleasant art installations in the Phillips Collection. The room is as it sounds: lined with beeswax. The small 6 by 7 foot room contains about 440 pounds of wax molded by the German artist and lit by a single bare light bulb. The experience is meant to be meditative, although we are boorish and find it a bit comical. As we stood in the Laib Wax Room contemplating life we also began contemplating whether beeswax tasted like anything. We can neither confirm nor deny that it does not.

Jacob Lawrence – The Migration Series. This series of 60 paintings depicts the relocation of many African Americans from the south to the north during the period between World Wars I and II. This series highlighted an aspect of social unrest unknown to many, making Lawrence an important social artist as well as one of America’s most important black artists. Lawrence was so concerned about color uniformity in these paintings that he applied them one color at a time across all 60 paintings, basically composing and constructing all of them at once.

Pierre-Auguste Renoir – Luncheon of the Boating Party. The most well-known and popular piece in The Phillips Collection, Luncheon of the Boating Party is a work that encapsulates everything that is loved about Renoir. He painted happy things: beautiful women, flowers, pets, party scenes, and this painting contains all of those things. Renoir was a true impressionist, painting without outlines and clipping the edges of the scene conveying motion and implying that the party continued off-canvas. He also refused to use black in his painting – he said it is not a color – instead using dark blue for shadows.

Despite the casual, energetic look of his style, Renoir spent many hours perfecting each of his paintings, including this one. That does not show, however, as the life and liveliness of the scene jumps off the canvas. Much like a real party you can even tell which people are flirting and which have had a little too much wine. This is a masterpiece by a master; expect to spend a little extra time looking it over.

Mark Rothko – The Rothko Room. On the second floor of the Sant Building sits the Rothko Room, space dedicated solely to Mark Rothko and his large color field paintings. Only 8 people are allowed in the small room at one time, so it never feels overwhelming. Rothko used hidden paint strokes to make blocks of color – the edges blurred into their background – to evoke emotion. The paintings allow the viewer to attach their own feelings to the art – joy, anger, fear, sadness, disgust, or maybe a feeling of confusion over why color blocks are considered art (not our feeling, but a common one nonetheless). Sadly, Rothko’s color palette often reflected his own mood, where it became blacks and browns shortly before he took his own life in 1970.