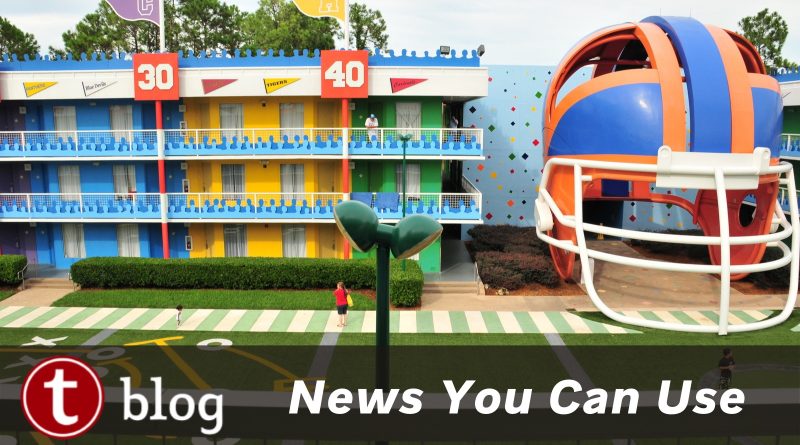 Every week here at TouringPlans, we update our readers on which NFL and college games are showing in the Orlando market on the Walt Disney World television system. This means these games will be available in resort hotel rooms, lobby and pool bars, and other locations around the resort. While some other venues with a sports bar tilt will show additional games, they are few and far between on property. Due to the ongoing pandemic, popular sports viewing venues are closed (the ESPN Club at Disney’s Boardwalk chief among them) so now more than ever it is important to know which games are available and where you can see them if following your favorite team’s (or fantasy team’s) action is still important to you while on vacation.

Note that this post is updated weekly, so check back before your trip to see which games will be available while you’re at Walt Disney World. And to our readers from last year, yes this post has been updated to reflect the current 2021 situation at Walt Disney World including pandemic restrictions and update television channel numbers!

WHERE IS THE BEST PLACE TO WATCH GAMES?

This is kind of a loaded question. For simplicity (not to mention social distancing/COVID-19 safety) the easiest place is definitely your resort hotel room. You can watch whatever game you want, with the sound on (even switch channels during the commercials) and cheer as loud as you want for every touchdown and sack. You can order whatever food you want and pour a cold drink whenever you please without waiting for the bartender. Still, the games available will be limited to whatever is on local TV and the fun, festive atmosphere of viewing with likeminded fans is not the same (especially if you’re the only one who actually wants to watch the game). With ESPN Club closed during the pandemic, the next best bet remains my usual go-to option: Splitsville Lanes at Disney Springs. They have plentiful TV’s, the ability to show out-of-market games, and there’s plenty to do to entertain non-fans in the family. There are also an abundance of great viewing locations close to Walt Disney World but “off property” including Buffalo Wild Wings and Hooters. Just make sure to use a rideshare service or some other means to not drink and drive if you’re going to travel offsite and imbibe during the games.

WHAT CHANNELS ARE AVAILABLE ON THE RESORT TELEVISION NETWORK?

All of the NFL broadcasters are there: CBS, FOX, NBC, ESPN, and NFL Network. For college football, all of the ESPNs are there, and now, as of 2021, FS1, Big Ten Network, and SEC Network. It appears that the CBS Sports Network has disappeared from the resort television system, much to the chagrin of late-night WAC fans.

If you’re trying to track down other sports, TBS is there for baseball and TNT for basketball and hockey. They also have the Golf channel.

WHAT ARE THE CHANNEL NUMBERS?

WHY ISN’T MY FAVORITE TEAM ON TV LIKE AT HOME?

Since almost every NFL game and most college games take place at the same time, broadcast and cable networks mainly show local teams to the local market. If you live in Seattle you will see the Seahawks while someone in Boston sees the Patriots, someone else in Nashville sees the Titans, etc. For Walt Disney World, Orlando local television is generally affiliated with Florida teams, mainly the Jacksonville Jaguars and Super Bowl champion Tampa Bay Buccaneers. College games tend to be distributed more evenly nationally but sometimes local priorities take over when there is a conflict.

SO WHERE CAN I SEE A GAME THAT ISN’T ON IN THE ORLANDO MARKET?

The best option used to be the AMC Cinema at Disney Springs that showed select out-of-market games on the big movie screen with in-seat food and drink service. The theater stopped offering this during the pandemic and does not appear to be starting up again in 2021 either. As mentioned above, Splitsville Lanes at Disney Springs and off-site sports bars like Hooters often show many out-of-market games.

WHAT ABOUT MY OWN STREAMING DEVICE?

It depends what kind of streaming you’re thinking about doing. If you can stream your home cable provider via an app, most stations that carry live football will be blacked out when not connected to your in-home wifi (this is how it works for FOX and CBS with my home Xfinity service, for instance). There are other devices, some legitimate and some configured to be less-so, that can stream directly from your home box, you may have better luck with these. And most Walt Disney World hotel televisions do have the ability to connect to your device for viewing right on the screen. You need to also bear in mind, however, that while Disney offers free wifi to guests throughout the resort, including in the theme parks, and it has been improving in quality over the years, it has been my experience that this lags too much to make streaming an entire football game enjoyable. You will probably have much better luck connecting to your own internet service, like a cellular network. It’s nearly impossible to keep up with all the various streaming services out there so it doesn’t hurt to check things out on a game-by-game basis. Sunday Night Football and Notre Dame games are broadcast by NBC on their Peacock platform for instance, while Amazon holds the rights to various other NFL broadcasts to stream via Prime Video, etc.

IS THERE ANYWHERE TO WATCH GAMES WHILE IN PARKS?

First off, I don’t know why you would want to. Nevertheless, if you do want to watch a game/check a score/whatever, the answer to this trivia based on our extensive research is the Rainforest Cafe at Disney’s Animal Kingdom. This restaurant does have televisions at the bar that can be tuned to sports. No other bars in Walt Disney World theme park restaurants have televisions. If you spot another one, let us know in the comments!

WHAT ABOUT BIG GAMES LIKE THE SUPER BOWL…DOES DISNEY DO ANYTHING SPECIAL?

As far as big viewing parties, no they don’t. The game on a big movie screen at a resort pool would be awesome but it’s not something they routinely do, especially here in the pandemic era. Resort food courts have been known to promote viewing big events like the Super Bowl there, with the game on the TV’s and special “bar food” menu items like wings. But these events are few and far between and often pop up with little advance notice or fanfare. It’s always a good idea to check with your resort a week or two before the game to see if they have anything planned.

OK, now that we got that out of the way, let’s get to the thing we all came here to find out…

WHAT GAMES WILL BE ON TV AT WALT DISNEY WORLD THIS WEEK?

These listings are UPDATED WEEKLY so bookmark this page and check back again before your trip!

One week in and there is already an Orlando/Tampa conflict, with Orlando’s WKMG getting Jacksonville/Houston in the CBS 1pm window while Tampa’s WTSP carries the Pittsburgh/Buffalo CBS lead broadcast. Disney World gets WKMG and thus Trevor Lawrence and the Jags. If you are staying southwest of Walt Disney World, closer to Lakeland, your hotel may carry WTSP instead. Check with your hotel before gametime if you need to know.

Note: These are only PROJECTIONS based on the NFL Schedule. Games will be officially announced during the week.