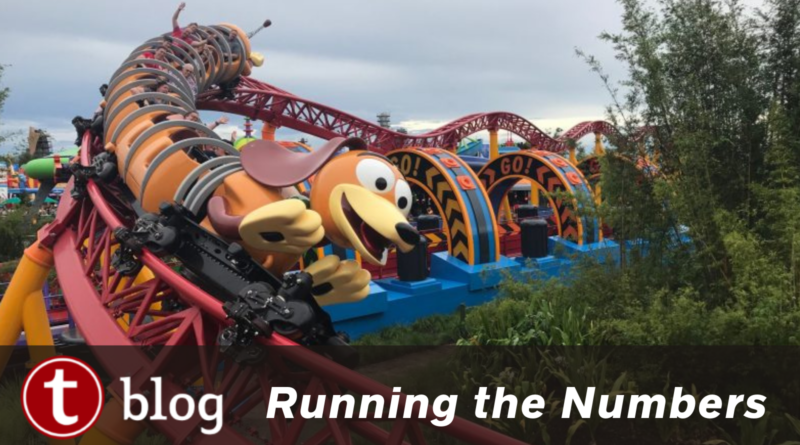 Update: We have newer data now! Check out this post for better data at Animal Kingdom and EPCOT.

One of the biggest planning questions people have regarding Genie+ is what attractions “sell out” the quickest. Especially during the week of Thanksgiving, a lot of guests were caught off-guard by popular attractions booking up for the day within the first hour of reservations being open. Knowing when attractions tend to sell out can help inform strategy regarding which reservations to make first, so that you don’t miss out on ones that save you the most time or make your party the happiest. And now that it’s been well over a month, we have a lot of data to tell us what Genie+ availability looks like on different days. Today I’ll walk you through the past month of reservation data, showing what Genie+ availability looks like at most attractions in each park under various crowd conditions.

There is more data about Genie+ availability that we won’t go over today, but will be included in a future post. Specifically, rather than just having information about which attractions are “sold out” and which aren’t, it’d be helpful to know something like “If I can’t book Peter Pan until 11 a.m., how late is my return window likely to be?” That deeper level of granularity will be our focus for next week.

Or in this case, the graphs. Today we’ll be looking at a sort of Genie+ availability heat map. It’ll show a list of the attractions in the park, and then a row of boxes. Each box will represent an hour of time. A nice dark green box means that you can get a return time for that attraction 100% of the time. It certainly won’t have “sold out” by then. A dark red box means that you can never ever get a return time for that attraction. Is has always sold out by then.

So if I look up Space Mountain, and scroll over to the 2 pm box and see a nice lovely bright yellow, I know that if I try to get a Genie+ return time for Space Mountain at 2 p.m., there’s a 50% chance I’ll be able to get one. The other 50% of the time, it will have already “sold out” for the day.

What Does Genie+ Availability Look Like at Magic Kingdom?

Good news! The vast majority of attractions still have reservation Genie+ availability into the afternoon, even in more crowded conditions (up to crowd level 7). In all conditions, Jungle Cruise tends to “sell out” before any other attraction, followed by Peter Pan’s Flight. On low crowd days, you’ll have plenty of attractions to pick from even as late as 7 or 8 in the evening. On more crowded days, availability starts to get more sporadic by around 6 p.m.

In all cases, it’s apparent that Magic Kingdom benefits from having a large number of attractions that qualify for Genie+. Many attractions to pick from, many with a high hourly capacity, means that guests who have purchased Genie+ can spread out, leaving availability for many attractions for most of the day.

What Does Genie+ Availability Look Like at Hollywood Studios?

The good news here is slightly less-good than at Magic Kingdom. On low crowd days, you can expect to have return times for about half of the eligible attraction left by 5 or 6 p.m. On higher crowd days, that number changes to about 1 p.m. – not ideal. If, midway through your day, almost half of the Genie+ attractions are already totally sold out for the day, that paints you into a corner very quickly.

Further not-so-great news: even on the lowest crowd days, Genie+ availability for Slinky Dog Dash totally books up by noon. On higher crowd days, that shifts to before 9 a.m. So even on crowd level 4 or 5 days, unless you make Slinky Dog Dash your very first Genie+ reservation, you won’t be able to use it. And once you get up to crowd levels 6 or 7, you have to book it within minutes of 7 a.m. or you’re out of luck. Millennium Falcon is the very obvious next choice of most Hollywood Studios guests, and tends to “sell out” within a couple hours of the park opening on those higher crowd days. On those same higher crowd days, by 4 p.m. you’re only ever going to be able to get Genie+ reservations for Star Tours or MuppetVision, which typically don’t result in much time savings anyway.

EPCOT has the same number of non-show Genie attractions as Hollywood Studios, but Genie behaviors at EPCOT are very different. While at Hollywood Studios, Slinky Dog Dash and Millennium Falcon tend to book out ahead of other attractions, almost everything else is pretty evenly utilized (except for maybe Star Tours and MuppetVision). There are lots of attractions where Genie makes a tangible impact on your wait. EPCOT is on the opposite end of that spectrum.

It’s very apparent, especially at high levels, that guests have figured out exactly which Genie+ reservations are going to save them time at EPCOT, and which ones they’re not going to bother with. Test Track, at all crowd levels, books up before any other attractions. And that makes sense because you’re always going to save the most time compared to standby at Test Track. Even on medium crowd days, Test Track is still pretty much the only attraction that sells out significantly before the end of the day.

When we move to high crowd conditions, that’s where things get really interesting. Test Track books up for the day before the park opens. Somewhere between 2 and 3 hours after the park opens, Soarin’ also books up for the day. And then about 2 hours after that, Mission: SPACE books up too. What does this mean from a data perspective? It means that almost everyone that is using Genie+ at EPCOT is booking Test Track before the park opens, then Soarin’ when they become available for another reservation, and then Mission: SPACE when they become eligible again. Very few people are deviating from that strategy. And then once they use those three … nothing else sells out before the park closes really. Even on the highest crowd level days. It could be that it’s just not worth booking reservations for an attraction that you’re going to have to back-track to in the evening because standby times were manageable for it anyway. Big note here: We at TouringPlans recommend never purchasing Genie+ for EPCOT. ILL could be useful, but the only big wait you’re going to need to avoid is Test Track, and that’s easy to do with a plan and a strategy.

What Does Genie+ Availability Look Like at Animal Kingdom?

Animal Kingdom is the toughest park for Genie+, as far as attractions to choose from. There are a few shows, but there are only five Genie-eligible non-ILL attractions. And one of them is Kali River Rapids, which is has been closed for its annual refurbishment since November 1st.

Let’s start with the good news again – on low crowd days, you can generally still pick from all four Genie+ attractions up until about 6 p.m. On higher crowd days, things get more interesting. Kilimanjaro Safaris tends to “sell out” for the day by noon. And then the other attractions follow with a lot of availability gone before 5 p.m. Similar to EPCOT, there seems to be a pretty telling flow of guest decisions. The Safari books up, and then ~2 hours later Na’vi River Journey books up, followed by DINOSAUR ~2 hours later, and finally It’s Tough to Be a Bug ~2 hours after that. Certainly if you don’t start making Genie+ reservations for Animal Kingdom until noon, your choices are going to be pretty limited on higher crowd days.