So much for me keeping to a bi-weekly schedule, huh? How hard could it be to sit down and write about a place that I adore? Suffice to say, folks, I’m sorry about my absence from cyberspace. But if you’ll bear with me, I’ll finally continue my three-part series: Teens n’ Tots Touring.

This time, I’m talking about single-parent families. I confess one of the reasons that I haven’t posted until now is that I was figuring out what I could say. I wasn’t sure if I could make a Disney World itinerary easier for single parents with both preschoolers and adolescents. For several weeks I was banging my head against a wall. For example, I was terrified at the prospect of guiding you readers through the multi-age horror that is Tomorrowland. (I imagined a single-mother being pulled on one arm by a teen bound for Space Mountain and on the other arm, a toddler determined to drive at the Tomorrowland Speedway.) But in a moment of Buddha-like enlightenment, I realized my mistake: I was trying to treat single-parent families like two-parent families.

Unfortunately, single parents just don’t have the same luxuries when it comes to a Disney World vacation, such as another pair of arms or a more daring partner to do the rougher rides with teens. Still, that doesn’t mean that a single mom or dad can’t take their kids to Disney. Like all things are when you’re a single parent, it just takes a bit more planning and a little sacrifice.

Of course, if you think that your teenager is ready, you can let him or her tour on their own with emergency cash and a cell phone. But if that isn’t the case for you, this article will be focused on families that want the teens to stay with them. I am going to take you on a park-by-park explanation of how to accomplish this task, including: all-age rides, easy dining, and tips on preventing meltdowns. So let’s start at the beginning, the Magic Kingdom.

For all kinds of families, the Magic Kingdom has some major perks: there are thrill(ish) and tame rides, princesses and pirates galore, and plenty of transportation to-and-from the park. Now the downside is that “MK” can be tricky to navigate. This is because the streets go around in a circle until you reach the end of Frontierland. But interestingly, the themes of the “lands” can help put you in the right direction.

For instance, Frontierland, which is based on the Old West, is on the west side of the park. Liberty Square, which is themed on America before the westward expansion, comes before Frontierland. East of the American lands is Fantasyland, the theme of which is a European faire. Next to fantasy is the sci-fi-themed area, Tomorrowland. (In-between is a cartoon land, Mickey’s Toontown Fair. Make of that what you will.) The only land that I couldn’t fit into this device is Adventureland; it’s south of Frontierland and west of Main Street USA. Speaking of Main Street USA, it is simple enough to find: it’s where you enter and exit.

Below is a list of Magic Kingdom attractions that most teens and tots like. I’ve made notes when an attraction may frighten a little kid — or big grown-ups, for that matter.

·         Pirates of the Caribbean (there are scenes in the dark, fake fire, and lots of skeletons)

·         Haunted Mansion (there are ghosts, ghouls, skeletons, and dead bodies)

·         The Many Adventures of Winnie the Pooh (don’t laugh; teens like the optical effects)

·         Monster’s Inc. Laugh Floor (teens can text in jokes for the CGI characters to perform)

Epcot presents a peculiar challenge for single parents. It’s the favorite park of many young adults, but not very popular with most little guys. What the little kids do like about Epcot is not what most teens do. Specifically, Epcot has awesome thrill rides, such as Test Track and Mission: Space. Both of these (as well as the other headliner, Soarin’) have height requirements.

If you can, it helps to give your teens some independence in Epcot. (After all, aside from its enormous size, there’s not much in Epcot that makes it hard to handle.) There are two alternatives to this: 1) skip Epcot, or 2) stick to World Showcase and Future World West. If single-parents want their families to stay together, they’re going to experience World Showcase in a different –- but no less enjoyable — way.

As opposed to focusing on the limited attractions, single-parent families should tour World Showcase as it was meant to be done. Slowly sample the offerings of each pavilion. You can shake the maracas in Mexico, play with marionettes in China, and eat puff pastry in France. In fact, I would recommend this form of touring to anybody! If your toddler get bored with World Showcase, find each pavilion’s KidCot Fun Stop; they are craft centers in each pavilion that kids love.

The only problem with this plan is the problem with Epcot: its size. Epcot is nicknamed “Every Person Comes Out Tired” and this is especially true for a young child. Be sure to pack painkillers in your First Aid kit. Even if your toddler denies having foot pain, regularly check their feet for blisters. If anyone — including you — is worn out, find a bench in the shade, buy a cool drink, and just relax. If your tot is antsy, drag your group to the Germany Pavilion; there is an elaborate, outdoor train-set there that toddlers could watch for hours. Everyone else can sit nearby.

Below is a list of attractions at Epcot that most teens and tots like. I’ve made notes when an attraction may frighten participants.

To be honest, I’ve been dreading this section most of all because Hollywood Studios is the dream of any adrenaline-loving pubescent. It also has some shows that are hits with toddlers. But sadly, there isn’t any overlap. Since the thrill rides have height requirements, even if a small child wanted to ride them, he or she couldn’t. Plus, even an enthusiastic teen will tire of the gushy, singsong entertainment provided for the little dudes. What’s the solution?

The normal approach of only experiencing attractions that both groups like would make for a short day at the Disney Studios — though this is becoming less true every year. You can always skip Hollywood Studios, but if you don’t want to do that, my advice would be to maximize the power of the FastPass.

For example, get two FastPasses for Tower of Terror. Proceed to a showing of Playhouse Disney ~ Live on Stage or Voyage of the Little Mermaid, depending on your tike’s preference. You can grab a snack or watch some street theatre afterwards. By this point, your FastPasses should be valid. Have your teen go first and wait for them to finish at the Child Swap station. If you want to ride too, hand your toddler off to your teen and go ride.

For attractions such as Star Tours and Fantasmic, it helps to have a brave toddler. In the case of shows, if your tot gets scared, you can just leave and wait for your teen. If your younger kid gets frightened on a ride, teach them to close their eyes and cover their ears. But never force your child to ride something; it can ruin the vacation for them. Feel free, however, to force your teen to do certain things. Many so-called “kiddie” attractions have wide appeal, even if they look juvenile — i.e. Voyage of the Little Mermaid.

Below is a list of Hollywood Studios attractions that most teens and tots enjoy. I’ve made notes when attractions may frighten small children.

·         Voyage of the Little Mermaid (once teens are in the theatre, they usually enjoy the show)

I have a feeling that you will like the Animal Kingdom. Aside from three or four attractions, its offerings delight the whole family. In fact, my only counsel to you for the Animal Kingdom is to be careful about your meal schedule. In my opinion, this park does not have sufficient dining options (to demonstrate, of the six counter-service locations, one of them only offers tea, espresso, and cookies). The rule-of-thumb for Animal Kingdom eateries is to ‘zig’ when everyone else ‘zags;’ either have lunch very early or late. You do not want to be stuck outside in a food line at the busiest time — roughly 11:30pm to 2pm.

One other thing that I should mention before you let your teens loose in the Animal Kingdom: remember that it can be difficult to navigate due to the tall trees that block streets from view. Remind them that if they get lost, they should return to Discovery Island at the center of the park — the street signs are very well marked on the Island. Also, a teeny-tiny note: remind your teens that if they ride Kali River Rapids that they should not keep their cell phones in their pants. Their bodies and their phones will get soaked.

Being at a water park with a toddler can be daunting. Safety has got to be top priority if you splurge on the water parks. Yet, this alone doesn’t create much of a touring problem. The issue that single parents will face is that the slides that teenagers love the most have height requirements.

‘Character hunting’ is when a Cast Member, costumed as a Disney animated character, signs autographs for and takes photos with guests. Toddlers — if they can get over the enormous size of the characters — love it! Teenagers usually do not. How do you character hunt with your toddler and satisfy your teen?

First of all, don’t get in line every time you see a character. Keep to your tot’s favorites. If everybody is too irritable to keep touring and you spot Donald Duck, rest assured that most characters can be found again at other parks. Then when you do character hunt, make your teenager the photographer. It gives us teens something to do and makes us feel like we’re being good big siblings.

I hope that this post was worth the wait. If you have questions about this Disney topic or any other, please ask them in the Comments. I’ll do the best that I can to answer them. Have a magical day!

I'm born-and-raised in Indiana, but I'll be off to college soon. I'm 16 and a major Disney dork. If you want teen advice on touring WDW, I'm your girl! 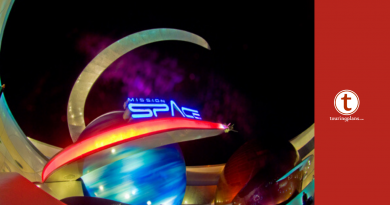 Everything You Need to Know About Mission: SPACE