I have been fascinated by character meals for a long time now, probably because my parents would never take me to one when I was growing up. I’ve read all of Brian McNichols‘ articles on character dining at WDW and love listening to various podcasts talking about the different dining experiences Disney has to offer. One thing no one ever seems to talk about is character dining at Universal. Well, today that is going to change.

Every Sunday, from 8AM – Noon, Jake’s American Bar at the Royal Pacific Resort has a character breakfast. About a month ago, I made a reservation for our party through Open Table for 10AM. Upon checking in, while we were waiting for our table, a couple of Pink Berets from the movie Hop were at the front of the restaurant. The children we were with made a bee line for these characters despite never having seen Hop.

The sheer awe that these kids showed in their faces and reactions made me realize immediately that my parents blew it. Big time.

We then made our way to the table and were told how the character dining works in terms of food. There is a large continental breakfast set-up in which every guest can have as much food from as they want. In addition, each guest can order one plated food dish. The options for the plates were:

The entrees for children were French toast or scrambled eggs. The server had freshly squeezed orange juice, which was very good. There was also freshly squeezed grapefruit juice as well as apple juice available. If you are a coffee drinker, Starbucks coffee is served.

We went for the Tahitian French Toast and Farm Fresh Three Egg Omelet. After having the corn bread at the House of Blues with the maple butter, I was looking forward to brown sugar cinnamon butter on this French Toast. While we were waiting for our meals, we headed over to continental breakfast area,

This spread was top notch and reminded me of the breakfast buffet offered by Royal Caribbean on my recent cruise on the Freedom of the Seas in terms of quality of the actual food. Lots of options for fresh fruit (which I consider the Fool’s Gold of a buffet), muffins, bagels, oatmeal, cold cereal, croissants, Danish, scones, yogurt and – my personal favorite – donuts. The variety of donuts being offered changed just during the time I was there. I found that be award-worthy.

While sitting down, a character change took place and the Pink Beret bunnies from Hop left and Gru and a Minion from Despicable Me arrived. Decent attention to detail here as the Pink Berets (who are like the secret service to the Easter Bunny in Hop) mock fought with Gru during the exchange.

It should come as no surprise that Gru and the Minion were the hit of the entire restaurant. Despicable Me 2 is inching towards a billion dollars at the box office and Despicable Me Minion Mayhem attraction at Universal Studios Florida is arguably the most popular ride in the park. Every kid in the room lit up when the Despicable Me characters entered the dining area, almost unable to contain their excitement.

While the Pink Beret bunnies seemed to stick together everywhere they went, the Minion and Gru generally were one table apart interacting with guests, although would definitely get together for pictures if people wanted them.

The Minion character was very playful and seemed to spend a lot of time with every kid in the restaurant. The Gru character was actually huge in person. I wasn’t expecting that. I’ve seen the character a lot in USF, but it’s usually from a distance watching the parade or a dance party.

One of the children we were with is a huge fan of Gru’s daughters in the movie and brought her three dolls with her to the restaurant. So she was able to introduce Gru to her dolls and have a whole conversation about that. One thing that never ceases to amaze me with almost all of Universal’s meet n’ greet characters (and Disney as well) is the amount of personality these characters can show with limited movement and not being able to talk. I think the Gru character, with a face that couldn’t move, was better at getting across emotions than most live humans you meet in the parks. It’s hard to describe in words, but these characters can connect with guests (especially kids) in a way that should be almost impossible given their limitations, but they succeed.

After spending a lot of time with the characters, our plated meals arrived.

This was hands down the best French toast I have ever had in my life and someone needs to bring brown sugar cinnamon butter to the marketplace. The serving size of both the French toast and the 3 Egg Omelet plates were rather large. I was a little terrified when the menu description read “Yukon gold potato hash,” thinking it was going to be one of those inedible scrambled mess of potatoes that restaurants like Denny’s serve, but these were very well seasoned potatoes. We actually ordered an extra side of them they were so good.  The hash browns were very similar to the type you will see at places like McDonalds and other restaurants. Perfectly acceptable. Raves across the board when it came to the food

While we were eating there seemed to be a minion dance party at the front the restaurant, with several kids dancing with the Minion. The little girl with us was more than happy to join in. Afterwards we stopped back by the continental breakfast area and had her try out the “Make-A-Pancake” machine.

Maybe I’ve been living under a rock, but this contraption blew my mind.  First a child presses a button on the machine, and then a couple of minutes later two pancakes coming rolling off a conveyer belt onto a plate. If one of these machines existed when I was growing up I think I would have made 1,000 pancakes. The kitchen of the future….today!

Now this is definitely for kids, as the pancakes themselves are really small (think of them as silver dollar pancakes after adjusting for inflation), but besides the fascinating way they are made there is a toppings bar for kids to decorate their pancakes.  This included a big bowl of maple syrup, and little bowls of sprinkles, white chocolate morsels and regular chocolate morsels. You would have thought the child was auditioning for Sweet Genius with the level of detail she was putting into her pancakes. I was very impressed at her creation, as just looking at the amount of sugar put onto these tiny pancakes could send you into a diabetic coma. After spending some more time with the Pink Beret characters, it was time to end our first ever character dining experience (but not before grabbing a couple more donuts to go).  The biggest surprise for me was the overall quality of food offered.  I have heard horror stories of some of the character meals at Disney in terms of quality of food for the price you pay. The price for the character breakfast at the Royal Pacific is $26.99 for adults, $14.99 for children, and kids under 3 are complimentary. I’ve now had a lunch and late night dinner at Jake’s along with an outdoor lunch at the Bula Bar sitting poolside and the food at each meal has ranged from good to great.

Unlike Disney, Universal offers a limited amount of character dining experiences. Inside the parks there is a character breakfast at Cafe La Bamba that lasts from 9AM-11AM each day of the week. That’s it. In December, when Islands of Adventure celebrates Grinchmas, there is a character breakfast in Circus McGurkus Cafe Stoo-pendous where you can meet The Grinch and other Dr. Seuess characters. This will be available  from December 7 through December 31. Outside the parks, at the on-site Loews hotels, there are several opportunities to dine with the characters. On Monday and Wednesday nights (6:30PM-9:30PM) at the Islands Dining Room at the Royal Pacific, Friday nights (6:30PM-9:30PM) at the Tattoria del Porto at Portofino Bay, and Saturday nights (6:00PM-9:00PM) at The Kitchen at the Hard Rock Hotel. The character breakfast I went to takes place every Sunday morning from 8AM-Noon at the Royal Pacific. It is scheduled to run through the end of the year, but its run has already been extended once so there’s a chance this could be available in 2014 as well.

Reservations are always encouraged (by calling 407-503-3463 or going to Open Table for booking online) but unlike Disney you generally don’t need to book these months out and there is always a very good chance at showing up on the day-of to still get a table. 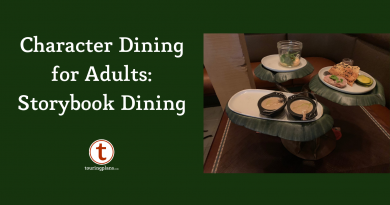