“It’s showtime!”…again at Universal Studios Florida, as a brand-new Beetlejuice show debuted on February 8, barely a month after the previous version of Beetlejuice’s Graveyard Revue closed in early 2014. The new production still teams up updated incarnations of Universal’s Classic Monsters with the “ghost with the most” (originally portrayed by Michael Keaton in Tim Burton’s 1988 supernatural comedy) for a rock ‘n’ roll karaoke concert.

The newly revamped version brings back Dracula, Frankenstein’s Monster and his Bride, and the Wolfman, along with their eponymous host. Added to the mix are Cleo and Phantasia, feminine reinterpretations of the Mummy and the Phantom of the Opera, along with two pairs of backup dancers in ghoulish getups. Naturally, all the music has been changed up, and now focuses on 1980’s vintage pop, including the Eurythmics’ “Sweet Dreams,” Michael Jackson’s “Smooth Criminal,” The Romantics’ “What I Like About You,” and The Bangles’ “Walk Like an Egyptian.” 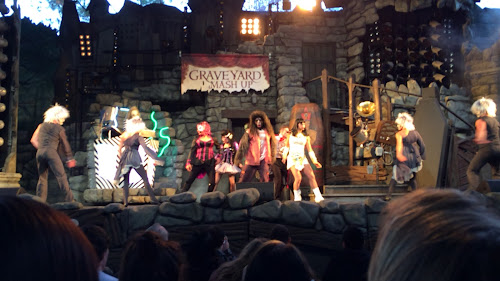 First, here’s my report from closing day of the old show, featuring a full video of the final show.

Now, here’s a complete video of the new Beetlejuice show, recorded at the final performance of opening day:

I’m awed by the amazing effort Universal’s cast and crew have put in, putting this show together in approximately 30 days, and I appreciate the effort to freshen the show’s soundtrack, which had grown long in the tooth (“Hey Ya,” anyone?). And as an arts supporter, it’s also always great to see such a large cast of actors (the company went from 7 performers to 11) getting a steady paid gig in this town. There are some nifty new props on stage, tons of new high-energy choreography, and pyro explosions that seem more frequent but less deafening than before. 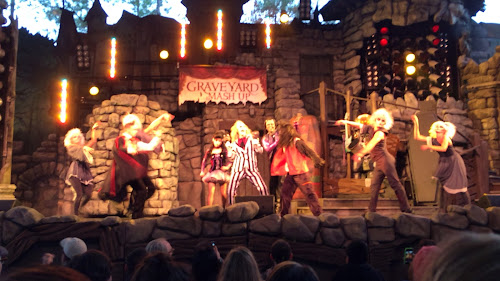 Unfortunately, I have major issues with the new show’s script, starting with the fact that there hardly is one. The prior versions weren’t Shakespeare, but at least there was a slender thread of a story arc, built around the Frank/Drac/Bride love triangle and Beetlejuice’s attempt to “transfunkify” the old-fashioned monsters.

Now, there’s nothing but an exhaustingly energetic non-stop dance party, with songs that seldom seem connected to the characters, and as little dialogue or comedy linking the music as they can get away with. The monsters start out in their funky garb now, so there’s no connection to their classic characterization, while Beetlejuice goes from being the protagonist to a dope hiding behind the DJ turntable.

Worst of all, Beetlejuice is barely in his own show now, shoved off-stage for the entire opening and never given an opportunity to ad lib in the audience. Older versions of the show may have raised some eyebrows with BJ’s borderline PG-13 innuendo, but now the raunchy bio-exorcist seems to have has his cojones excised. 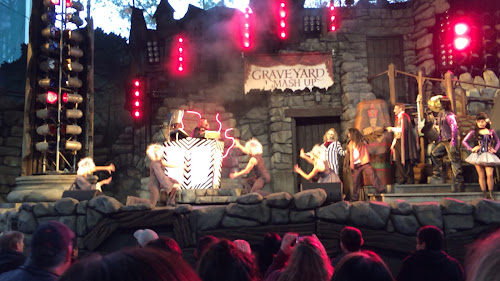 I have other nits to pick, like the member of the opening cast who needs professional vocal training stat (I’ll let you pick out who), or the bargain-basement fright wigs on the backup dancers, or the way we’re patronizingly teased with “Shake Señora” and “Thriller” but never hear a second of Danny Elfman’s Beetlejuice theme.

But maybe I just need to see the show another few dozen times to get used to it. I’m sure I’ll have plenty of chances over the coming years, before the next inevitable revision comes along… 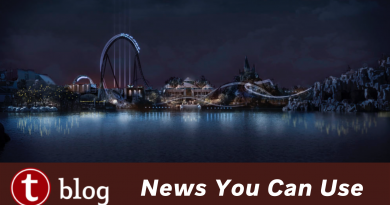 Around the Universe – Discount and News for October 2020

Refillable Mugs at Universal Orlando – Worth it or Wasted?