First of all, I am not a meteorologist. I don’t even play one on TV.

That being said, I have thirty years of experience in Orlando weather, including doing extensive research on hurricanes.

The 2014 hurricane season has begun, and the year marks the tenth anniversary of Orlando’s “Year of Three Hurricanes”. In this article, I’ll cover the issue of hurricanes and Orlando’s famous thunderstorms as well as how to avoid them and vacation around them.

Officially known as “tropical cyclones” but colloquially as hurricanes, the massive summer storms are one of the most powerful and dangerous natural events on earth. The amount of energy released in one day by an average cyclone in producing rain (which is 400 times greater than the wind energy) is equal to the yearly energy production of the U.S.

So you’re thinking hurricanes and Florida go hand-in-hand like Vermont and snow, right? Well, sort of. Florida is a big state. Not only in terms of square miles, but it’s long. For instance, it takes 12 hours to drive from Key West to Pensacola.

Of course, every mile is a potential hurricane target, but Walt Disney World is only some 40 miles square. Additionally it’s in the center of the state, relatively far from the Atlantic or the Gulf of Mexico. This means every time your local news tells about a hurricane in Florida, it’s unlikely to be passing close to Disney world.

The U.S. government started regular tracking of tropical cyclones in 1851. Looking at those statistics gives excellent news: The frequency of a hurricane passing through the Walt Disney World area in any year is 1 in 10. A 10% chance each year is all local have to worry about. Want even better news? If you’re visiting for a week or two, you have an even smaller chance of having to deal with one of nature’s super storms.

We’ll look at the statistics in a moment, but first let’s have a quick primer. As mentioned before, the scientific name for these storms is tropical cyclone. That’s because when talking about them, one can be referring to hurricanes, tropical storms and tropical depressions. At least it’s all rather simple. It’s all about sustained wind speed:

Tropical cyclones are “born” in the latitudes just north and south of the Equator. Officially, tropical cyclone season is between June 1 and November 30, so there is little chance of a storm during the other six months. Winds, currents and especially warm water temperatures combine to create a storm that has a rapid rotation which is counter-clockwise in the northern hemisphere (this is caused by the Coriolis force, the same effect that determines the direction of rotation of your flushing toilet).

Cyclones that concern Florida form in the Atlantic off the west coast of Africa or in the Caribbean. A cyclone’s directional movement can be anywhere from stationary to around 50 mph; 80 km/h, though 10 mph; 16 km/h is a more normal speed. They can maintain their speed over land, though significant landmasses typically weaken the intensity of storms. For instance, a category 3 hurricane hitting Florida will often lose more than 50% of its energy as it crosses the peninsula.

Cyclones are dangerous for several reasons. Coastal communities have to worry about storm surge: winds pushing waves to immense size which can batter buildings and cause flooding. General flooding is also an issue, since a large storm can drop twenty-five or more inches of rain in only a few hours. There are high winds, which can destroy buildings and knock out power lines. While lightning activity is not prevalent in cyclones, it’s possible and an even more potential concern in larger storms is the creation of destructive tornadoes.

As terrible as that sounds, in reality, central Florida is better situated than most of the state. There’s no need to worry about storm surge. Flooding isn’t a worry either: Orlando is 85 feet above sea level and there are several hundred lakes in the area that can absorb an insane amount of precipitation. Even after the three hurricanes ten years ago there wasn’t hazardous flooding. High winds are an issue, but every powerful storm that has passed through Orlando was slowed down by the land to lessen the potential for damage.

And once again, it’s very unlikely for Walt Disney World visitors to have to deal with a cyclone. Since 1852, central Florida has been directly hit by a category 1 or higher cyclone 17 times. On average, that’s one every 9.5 years. I’ve looked at every storm track, the intensity of each storm and the proximity of the center (“eye”) of the storm in relation to Orlando. So let’s get down to brass tacks:

To be complete, we should talk about safety and preparedness just in case. Here are my suggestions:

Florida has two seasons. June through September is our “wet” season, while October through May is the “dry”. That’s not to say we don’t get rain in the winter, but it’s summer when Florida develops its remarkable cycle of afternoon thunderstorms.

Lightning Capital of the U.S.

Yes, that’s been said over and over again. People may think it’s something that central Florida chose to call itself, but nobody living here thinks lightning is a wonderful. It’s dangerous and something we live with. A guest asked me the other day, “What’s the big deal about lightning?” I answered, “Several hundred million volts of energy travelling at 100,000 miles an hour.”

Look at the map showing the frequency of thunderstorms created by the National Weather Service. See the red oval with the number 100? Walt Disney World is located just to its north.

Florida thunderstorms develop because of a high level of moisture (humidity) and warm air (over 90F/32C) colliding with cool air (primarily from the Gulf of Mexico). Storms can appear out of nowhere and there’s no need for considerable clouds to produce rain and lightning. There are countless days every summer with drenching rain while the sun shines.

The rain is mostly an annoyance. Like I mentioned before, flooding in the area isn’t a problem. Walt Disney World has been designed to take advantage of Florida’s lakes and sandy soil for remarkable drainage.

On the other hand, lightning is very much something to worry about. It’s unpredictable, which is why all of Florida’s theme parks and attractions take it especially seriously. Part of the proof of their measures is that only a handful of guests and staff have ever been hurt by lightning in the parks. Doing some research, one can find only a couple incidents, both related to water parks. Occurring at Busch Garden’s Adventure Island and SeaWorld’s Discovery Cove, they show that it is almost certainly the connection with water that increases the chance of injury.

In 2011, Discovery Cove, the exclusive “day-spa” where guests can swim with a dolphin, had an incident where three guests and five employees were injured by lightning. Tragically, that same year Adventure Island witnessed the death of a lifeguard working in one of its pools.

This cannot be stressed too strongly: Lightning is dangerous and unpredictable. If you’re outside during a storm, especially if you can see lightning, take cover. Please ignore the guests who keep walking about; if you notice very few cast members outside, even if it’s not raining, that tells you that lightning is nearby.

Each theme park company has state-of-the-art lightning systems. For instance, every building is covered with lightning rods. Generally, guests don’t become aware of these systems until they find that an outside attraction or show is closed. The parks track the proximity of lightning. Lightning strikes within a certain radius cause pools and water play areas to close; outside attractions to shut down; parades and shows to be postponed or cancelled; outside vendors to close up and take cover.

Chances are, if you’re doing a Walt Disney World vacation between June and September you’ll have to deal with Florida’s liquid sunshine and daytime light shows. The easiest thing to do is assume that every day, roughly from 3:00-6:00 PM there will be a storm, so go ahead and plan for it.

I hope this article helps. Too many times I’ve heard people talking about hurricanes as if that’s a reason to avoid Florida in the summer. I’ve also seen too many people completely unprepared for the inevitable thunderstorms. With some basic planning and creativity, anyone can take Walt Disney World by storm!

Greetings! I'm Tom, better known as Stingray Tom. Photographer (nature & architecture), historian (Orlando & Florida, including theme parks) and published author (including Orlando's Historic Haunts). I'm a 30 year Orlandoan but was born within 50 miles of Disneyland. I spend time each week in the parks as well as deep in Florida's nature. I love animals, dark rides and my girlfriend (not necessarily in that order). Twitter @StingrayTom3000.

Lessons from My 1st runDisney Event 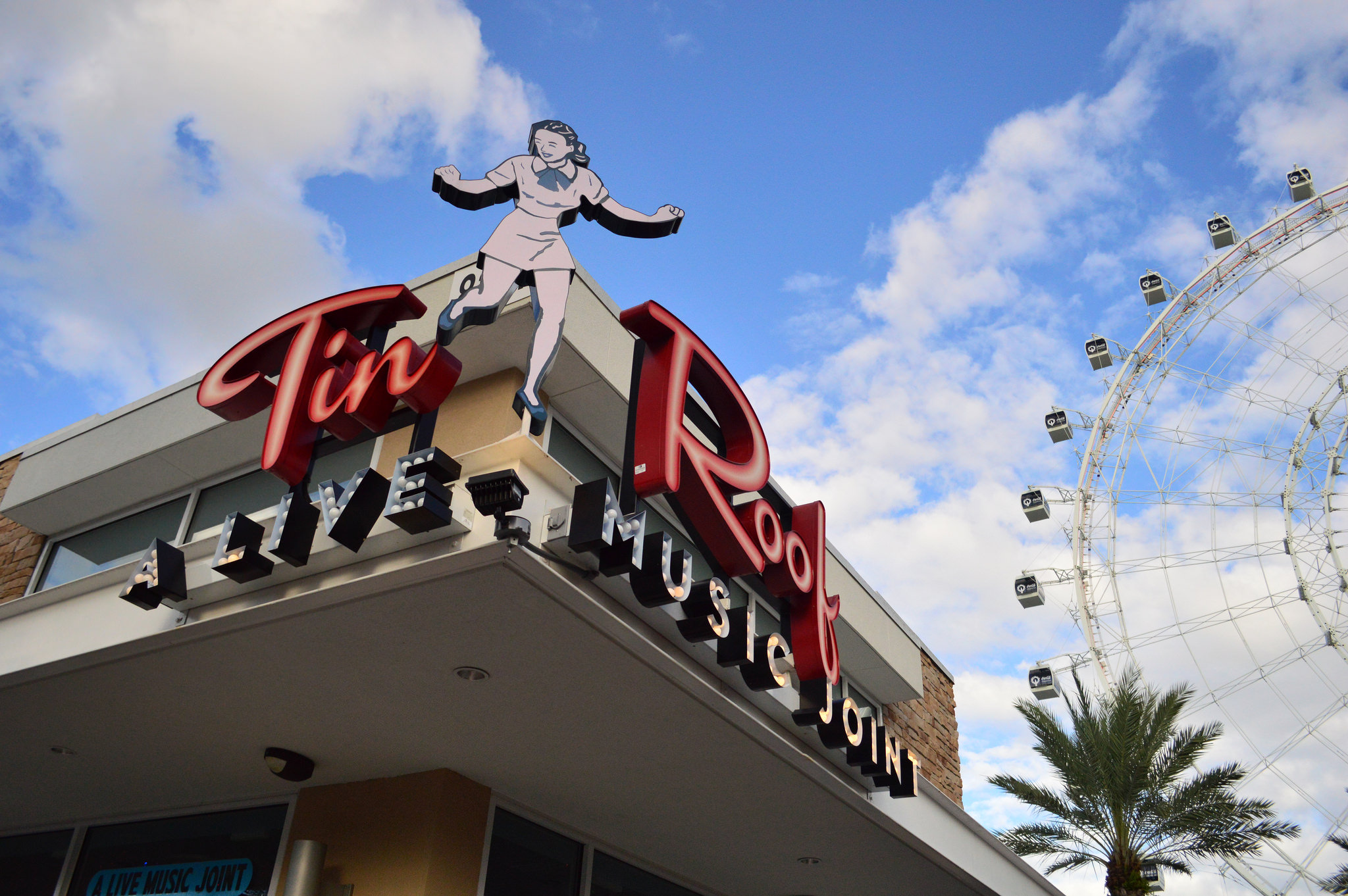 What makes I-Drive 360 and Tin Roof worth a visit?