Great Disney World vacations have three stages: anticipation, enjoyment, and fond (or wistful!) memories. Books are the perfect way to attune yourself with all three stages. Whether you’re getting excited for a trip, looking for deeper understanding of the parks’ themes and design, or ready to spend some time reading about Disney history, there are books to widen your world.

Here are some books to get you excited, keep you entertained, and tell you more — before, during, and after your Walt Disney World vacation.

On the way to Disney World, you’re getting revved up. You’re making plans. You want to know what to see and where to go; you want to be reminded of favorite spots you’ve loved in the past.

First, get the current details on the parks well before even arrive. Grab a guidebook for the nitty-gritty planning work. Even seasoned travelers can use a reference guide for trip planning — I always have The Unofficial Guide to Walt Disney World on hand. I use it for quick reference on recommended touring plans, height requirements, dining options, and resort maps. Even though I visit Disney World multiple times a year, I still need to get specifics down pat.

But for something bright, colorful, and pleasing for all ages, try Since the World Began: Walt Disney World – The First 25 Years, by Jeff Kurtti. Yes, Cinderella Castle is in her forties now, making this book just a tad dated. But you can often find it used, or even at your local library, and it’s a nice introduction to Disney World that the whole family can have fun flipping through. Coffee table-sized and lavishly illustrated, it’s a perfect let’s-get-ready, excitement building type of read. (Amazon, BN.com)

In a similar vein, there are a number of Walt Disney World photo retrospectives that Disney has released over the years, many of them from the 70s and 80s. Keep your eyes open at your local thrift stores — these beauties, often hardcovers, can often be picked up cheaply and are a fun way to relive old memories and learn more about some of Disney World’s long-lost spots.

Enjoyment: Getting More From Your Trip.

While you’re there, you want to stay in that Disney bubble. Whether you’re in the parks or lounging by the pool, spending your spare time with a thriller isn’t exactly indulging the fantasylands all around you. Keep it Disney with books for touring and for relaxing.

For an enhanced experience in the parks, take along the Imagineering Field Guides. Tall and slim, these richly illustrated little books are designed to be slipped into a purse or backpack. Although outdated in some places — the Magic Kingdom edition still contains Toontown instead of New Fantasyland — the Imagineering Field Guides are your personal tour guides through the art, inspiration, and history of the Florida parks. You’ll find one for each of the Walt Disney World parks, as well as for Disneyland and Disney California Adventure. (Amazon, BN.com)

For another sharp look at the Magic Kingdom, try Aaron Wallace’s The Thinking Fan’s Guide to Walt Disney World: Magic Kingdom. Wallace devotes a chapter to every land in the Magic Kingdom, then digs deep into the culture and lore behind every attraction in the land. He devotes six pages to The Country Bear Jamboree alone. As a vacation read, it’s heavier than your standard airport novel, but adds remarkably to the theme park experience. We’re still waiting for the guides to Epcot, Hollywood Studios, and Animal Kingdom, Aaron! (Amazon, BN.com)

What about a good read during some resort time? In It’s Kind of A Cute Story, long-time Disney artist and Imagineer Rolly Crump will tell you some Walt stories you’ve never heard before, plus reveal an intimate look at an artist’s life in the Walt Disney Studios and WED Enterprises. It’s not all pixie dust and rainbows in Crump’s story, but with a warm, personable, and friendly voice, he reveals more about the inner workings of Disney in these pages than any other book I’ve found on the subject. (Amazon, BN.com)

Memories: How Did They Do That, Anyway?

And after your vacation, curiosity sets in. All those attractions, parks, resorts, a castle in the middle of Central Florida… how did all of that happen? Delve deeper into Disney history. Congratulations — you’re becoming a super fan!

For a look at the man who dreamed it all up, start with a Walt Disney biography. Although there are quite a few on the market, many Disney historians point to the official bio as the best one on the shelves. Bob Thomas’ Walt Disney: An American Original was sanctioned by The Walt Disney Company and is published by their own Disney Editions. You can even find it on sale around Walt Disney World. (Amazon, BN.com)

Once you’ve scratched the surface of Walt’s life story, explore his motivations and his hopes for Disney World. Walt and the Promise of Progress City will take you on a journey through Disney Company history and Walt’s fascination with urban planning. By the time he was planning the Florida Project, Walt was more interested in solving great problems of society, specifically those of our decaying cities, through the technology he and his team at WED Enterprises had spearheaded in attractions development. Sam Gennawey’s book is a detailed look at how Walt’s attentions turned towards mass transit, the needs of urban dwellers, and balancing fantasy with reality to create a new kind of city. (Amazon.)

Now get down to the design and building of the parks with John Hench, who went from studio sketch artist to senior Vice President of Imagineering in a sixty-five year career with The Walt Disney Company. Designing Disney: Imagineering and the Art of the Show shares artwork, sketches, and stories about what truly sets Disney theme parks apart: attention to detail. Whether it’s the reason behind the placement of Disneyland’s Snow White wishing well, or the real definition of the color white, this book will give theme park fans the nuts-and-bolts details on the how and why of Walt Disney World and Disneyland. (Amazon, BN.com)

Business in the Young Adult publishing world is blooming, and happily we have a few authors on the scene who are just as Disney-obsessed as we are.

While at Disney World, look for the Ridley Pearson series Kingdom Keepers. This adventure series, published by Disney Editions, follows a group of kids as they fight off villains throughout the Disney Parks and onboard Disney Cruise Line ships. Fairly easy reads, they should satisfy middle-grade readers and up who are looking for some fantasy set in the parks. A nice bonus: the action and adventure keep boys interested too! (Amazon, BN.com)

For Young Adult that crosses over into light adult reading, look for Kate Abbott’s Disneylanders, a coming-of-age summer story set at (you guessed it) Disneyland. Full of Disney trivia and nods to the things Disney fans love (the chapter titles are especially clever: “Sympathetic Vibrations,” “My Siestas Are Getting Shorter and Shorter”), Disneylanders takes readers right into the park. (Amazon, BN.com)

For the East Coast, we have Gaby Triana’s Summer of Yesterday. This teen read involves Fort Wilderness, breaking into River Country after dark, and a little time travel back to 1982 — perfect for settling down in a beach chair and remembering your own swims in that suspiciously pea-green lagoon. Triana obviously knows Fort Wilderness: her descriptions of the cabin loops, The Settlement, and Bay Lake are spot-on. I can hear the recorded spiel to Whoop ‘n Holler Hollow now. (Amazon, BN.com)

These are just a few titles in a growing library of Disney and theme park-related books. Whether they’re authorized by Disney or not, histories, memoirs, thrillers, and Disney College Program diaries are being published to satisfy a growing fan base. What’s on your Disney World reading list? 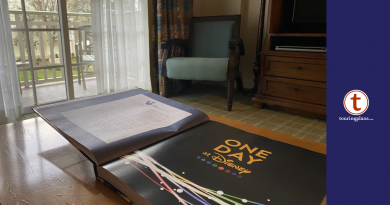 Entertainment to Get You Excited for Disney

8 thoughts on “Disney World Reading List: Books for Before, During, and After Your Vacation”